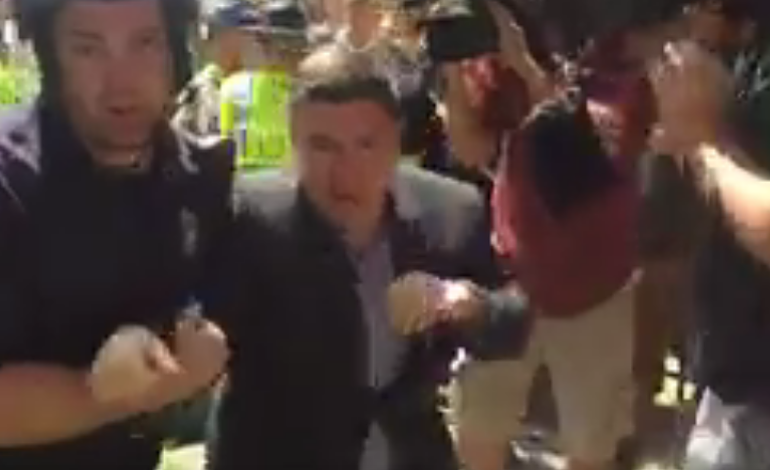 As The Canary previously reported, the appalling violence over the weekend at Charlottesville (Virginia, USA) saw one woman killed and around 20 people injured. But in the aftermath of this tragedy, not all went well for the far right. One of their websites is reportedly about to be closed down; an organiser of the rally has had to be escorted out of town; and a far-right organisation has been forced to distance itself from the man charged with the terror attack.

The website of The Daily Stormer, one of several far-right organisations that reported on the rally, posted an extremely offensive article about Heather Heyer – the woman killed in the attack. Here is an extract of that article: 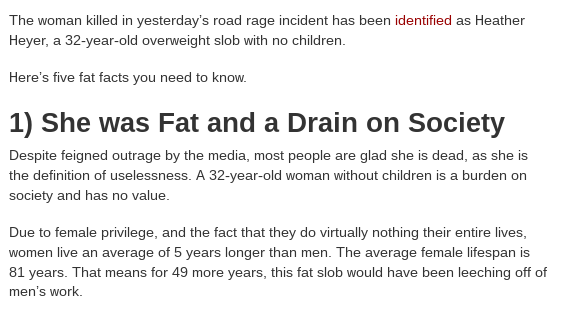 The Daily Stormer also described the mowing down of protesters by alleged perpetrator James Fields Jr as just ‘road rage’:

Elsewhere, The Daily Stormer congratulated President Donald Trump for his comments after he heard of the tragedy at Charlottesville. The article added: 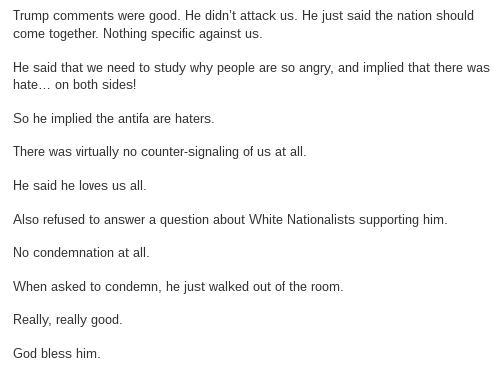 The editor of The Daily Stormer is Andrew Anglin. The day after Donald Trump won the presidential election, Anglin wrote:

Our Glorious Leader [Trump] has ascended to God Emperor. Make no mistake about it: we did this. If it were not for us, it wouldn’t have been possible.

Two days after the death of Heather Heyer, Trump finally condemned “the KKK, neo-Nazis, white supremacists and other hate groups”.

In the latest twist, one alleged Anonymous group claimed to have taken over The Daily Stormer website, and said it would remain under its control for 24 hours. 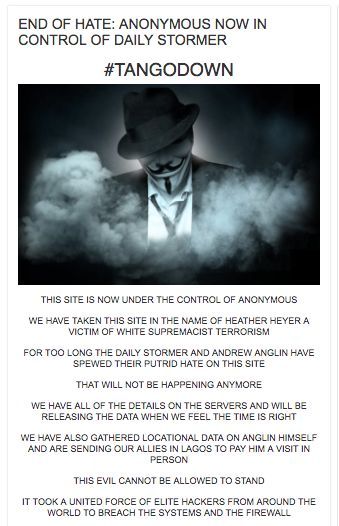 However, @YourAnonNews tweeted that the alleged hack is likely a Daily Stormer stunt. And another established Anonymous account also advised caution.

In any case, The Daily Stormer website is about to permanently close:

We informed The Daily Stormer that they have 24 hours to move the domain to another provider, as they have violated our terms of service.

Meanwhile, a user operating a prominent Anonymous Twitter account (@YourAnonGlobal) claimed that an attack on the Charlottesville city website was carried out by New World Hackers (NWH). An NWH member reportedly said:

At the time we saw the police were not so helpful, they left the people to die which forced us to targeted the Charlottesville website to give them a message… New World Hackers are back, and we are delivering our own version of justice to the KKK, and government, in which ever way we please.

On 13 August, meanwhile, Jason Kessler (one of the organisers of the 12 August ‘Unite the Right’ rally) was chased out of town during a press conference and forced to seek police protection:

Jason Kessler rushed away from press conference and eventually brought to police station when his car wasn't reachable pic.twitter.com/JDG1OQ9Hxk

At the same time, openly fascist organisation Vanguard America (VA) has denied that James Fields Jr is one of its members; despite a photo of Fields at the rally alongside VA members and carrying a VA shield.

It was prior to the 12 August tragedy that The Right Stuff founder Mike Enoch and former Ku Klux Klan (KKK) Grand Wizard David Duke spoke to their troops. But counter-protesters were having none of it:

It would appear that the main danger from terrorism in the US is from the far right. A joint project by the Investigative Fund at the Nation Institute and Reveal from the Center for Investigative Reporting has found that, within the past nine years, right-wing extremists plotted or carried out nearly twice as many terrorist attacks as so-called Islamist extremists.

The far right is mobilised, and is not always carrying symbols of fascism. As journalist Paul Mason argues:

All over the world, liberal, progressive people are confronted by plebeian movements that want to roll back the social changes of the past 50 years.

So what to do? Mason adds:

We should have stopped this long ago. Charlottesville is the wake-up call to progressives everywhere… If someone is waging a culture war against you, at some point you have to fight back.

If we don’t, there will be more Charlottesvilles, and a greater loss of our liberties.