It's only August, but the Tories are already hitting your new year 2018 finances where it hurts - Canary Workers’ Co-op 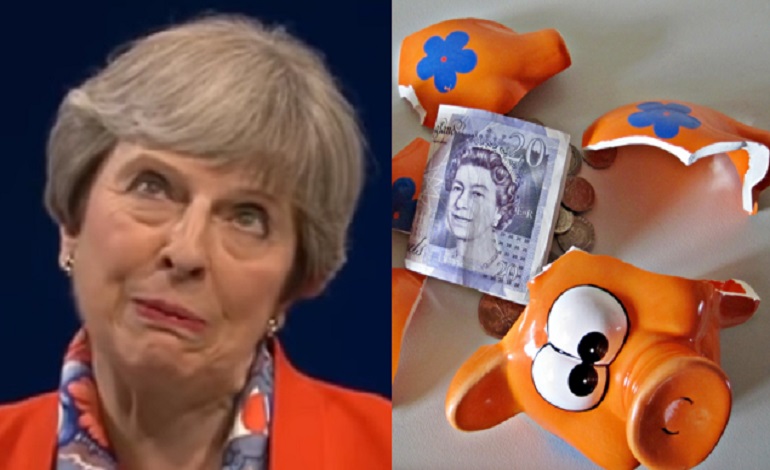 While many people are enjoying their summer holidays, the government has announced some new year blues for many of us. And although 2018 may seem a long way off, it will see an extortionate price hike hitting people’s purses.

The Office for National Statistics (ONS) has said that the Retail Prices Index (RPI) measure of inflation was 3.6% in July; up from 3.5% from June. And the ONS said that the Consumer Prices Index (CPI) inflation rate held steady at 2.6%, meaning that the cost of everything we buy didn’t really go up any more than in June. But the problem is that the RPI rate is used by the rail industry to set ticket price increases every January.

In January 2017, prices on certain fares went up by 1.9%. This is because the government allows rail operators to increase certain fares by up to the rate of RPI. But the 3.6% increase looks set to be the largest hike since 2011, when it was 5%. The tickets affected by the rise will be ‘anytime’ and some off-peak fares. It will also hit season tickets in England and Wales.

Interestingly, the ONS has said that it does not support the government allowing RPI to be used to increase prices. It said:

We know there will be a focus on the RPI this month, but the National Statistician has been clear it is not a good measure and we do not recommend its use.

But the Department for Transport (DfT) defended the system that allows prices to go up by the rate of RPI, saying:

We are investing in the biggest rail modernisation programme for over a century to improve services for passengers – providing faster and better trains with more seats… We have always fairly balanced the cost of this investment between the taxpayer and the passenger.

Commuter groups, however, hit back. Emily Yates from the Association of British Commuters (ABC) told The Canary:

We go through these fare hikes every year. And it doesn’t take an economist to realise that this can’t go on indefinitely. The system is straining at the seams already and suffering decades of under-investment. So, when we’re told we’re ‘paying for improvements’, it’s actually for backdated improvements that even then we can’t rely on happening. The system is fragmented and built on a short-term logic that prioritises shareholder profits while it worsens the socioeconomic divide. More and more people are being priced out of rail travel, and this can’t be tolerated.

This latest sting on commuters comes after a long line of problems for the UK rail industry. But as even the BBC has pointed out, successive governments have “deliberately used the system to put prices up… because they want passengers to pay a bigger chunk of the rail bill”, so that they pay less. Currently, fares account for 70% of the costs of running train services. So not only is the government shirking its responsibilities over our infrastructure, but it’s also allowing private train companies to do the same. Which, as is always the case with the Tories, means the public are getting a bad deal; while big businesses laugh all the way to the bank.