Rejected Blairite David Miliband tries to fool us about the EU. But no one's buying it. - The Canary 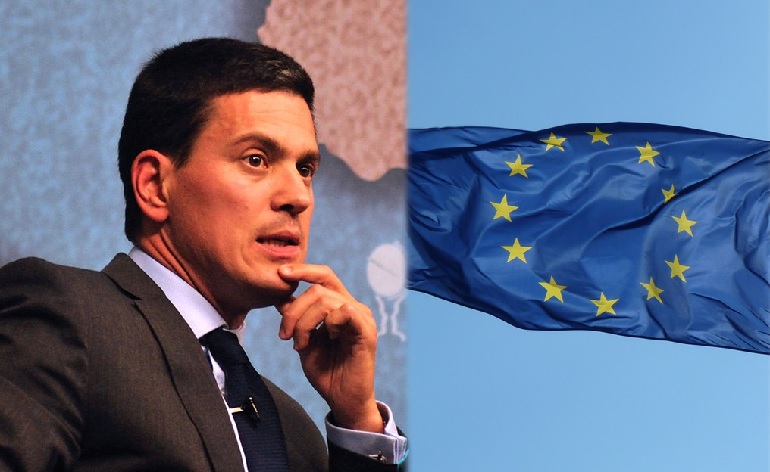 Former Labour minister and Blairite David Miliband recently praised the European Union (EU) for its commitment to “democratic rules”. But in reality, his words are nonsense. Because the EU is a fundamentally undemocratic institution and it regularly violates the democratic principles it claims to uphold.

Labour rejected Miliband for leadership of the party in 2010, favouring his brother Ed. He is a former secretary of state for foreign and commonwealth affairs and is undoubtedly familiar with the inner workings of the EU and its democratic deficit. He has also previously advocated including countries with a questionable democratic record in possible future EU expansion, including Russia and Turkey. So it’s at the very least disingenuous for him to now be praising EU ‘democracy’.

Here are just four reasons why the EU is undemocratic, in spite of what people like Miliband say.

The most striking recent example of the EU’s subversion of democracy concerns Greece in 2015. At the time, with ‘Grexit’ a distinct possibility, the Greek people elected the Syriza party to government on a promise of ending the crippling nationwide austerity programme. The austerity-imposing EU was not happy.

Highlighting the deficit of democracy in the EU, former UK Chancellor George Osborne said that Syriza’s manifesto would be “incompatible with what the eurozone currently demands of its members”. And in a sign of EU strong-arming to come, senior French politician Bruno Le Maire threatened: “Mr Tsipras will have to fall into line”.

2) Ever closer union, ever distant democracy

The most powerful pillar of the EU is the European Commission. But its members and president – Jean-Claude Juncker – are appointed to their roles rather than elected. The commission represents the EU whereas the European Parliament represents the people. The parliament is made up of democratically elected MEPs from across Europe. But it is a weak parliament, with no real power over legislation.

The real power lies with the commission. Yes, the undemocratically appointed one.

All the while, EU citizens are led to believe they are voting for true representation in Brussels.

3) ‘Ramming through the European constitution’. In whose interests?

Another prime example of how the EU subverts democracy regards the so-called ‘European constitution’. Attempts at even closer European political and economic integration were democratically rejected by numerous countries; including Ireland, the Netherlands and France. But the EU just kept coming back until they were able to ram the legislation through.

The Treaty of Lisbon was signed into law in 2007, but the EU’s strong-arming tactics to force it through weakened the concept of democracy on a European level. Referring directly to David Miliband and European politicians eager to force through the European constitution, Conservative MP William Hague said that they were:

While German Chancellor Angela Merkel does her best to tone down German dominance, it’s clear. Former Greek finance minister Yanis Varoufakis saw EU power up close, particularly as a member of the Eurogroup of finance ministers. Germany’s Wolfgang Schauble was and continues to be its leader. And Varoufakis has no doubt that Germany’s control over Europe is ‘absolute‘.

The overwhelming power of one country out of a group of 28 raises serious questions regarding its influence and control over other member states.

Politicians and media outlets love to espouse the supposedly democratic ideals of the EU. They use it to great effect. Because if the truth were common knowledge, it might not take long for the EU to disintegrate.

Up until 1945, Europe was host to bloody war after war over centuries. And the main reason to bring Europe together under a union of nations was for the purpose of continental security in the aftermath of World War Two.

Current generations perhaps take peace in Europe for granted. But this does not excuse the fact that the EU is inherently undemocratic.

The idea of the EU as a selfless champion of democracy (which politicians like David Miliband want you to believe) is mere fantasy. Spreading this lie, though, makes us think we have a real say in who wields power in the EU and what they do in government. But the truth is that, under current EU rules, we don’t.