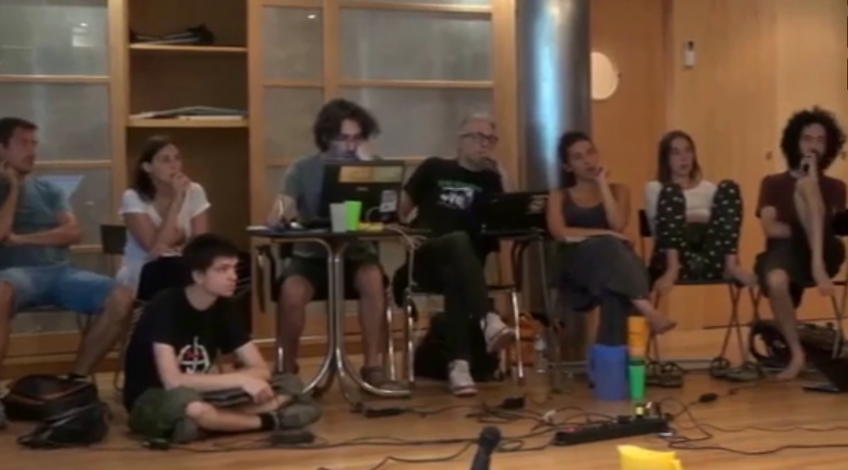 In 2015, the Exeter-sponsored film-makers at Enfable travelled to Spain to make a movie about a post-capitalist co-operative in Catalonia. More recently, a two-day conference in an Athens squat included updates on the work of that co-operative. These updates, together with the Enfable film, provide an insight into how post-capitalism need not be some distant dream, but is realisable right now.

The Enfable film was focused on the Cooperativa Integral Catalana (CIC), which is a very different organisation from what many people might term ‘co-operative’.

For example, the principles adopted by the CIC include what it calls [pdf p4] “financial disobedience”, which is a means of avoiding contributions to the state economy:

[So] instead of paying tax, you can declare that you have donated it to a [co-operative] community chest. While this method may not be entirely legal, if enough people do it then they can make it so. It is called financial disobedience…

But the CIC is much more than just a way of organising your money, as one member explains [pdf p5]. It also offers a range of autonomous services, such as help with housing:

With a network of participative assemblies, we begin to collectivise. Assemblies can network with one another. Other groups form for different projects, like cooperative housing, a community bank, and legal services.

In short, the philosophy of the CIC is not about opting out of society, but opting into a different kind of society.

The CIC’s members can organise their own food, housing, health, education, energy and transport. CIC decisions are made by consensus via [pdf p11] fully participatory fortnightly assemblies, enacted by working groups. The CIC also uses CASX, which has been operating as a co-op since 2013 and is like a cooperative bank, but with no interest and very strong ethical principles.

Furthermore, as the presenter at the Athens conference explained:

The Integral Cooperative is not a cooperative in the legal sense… it’s basically an umbrella, a network of different entities, collectives, and individuals who are working together to build this little bubble and protect itself from attacks from the State.

The CIC has links with similarly organised projects [pdf p15] and other co-operatives: 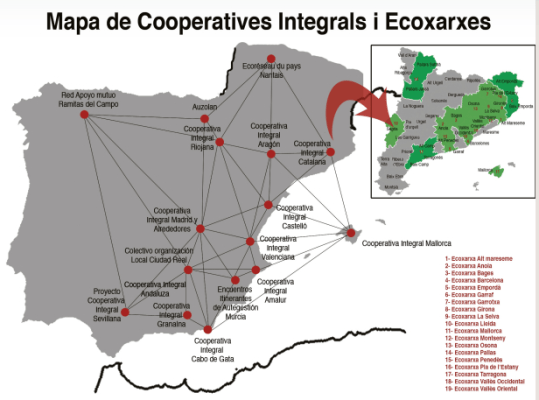 The CIC also has links with time banks (which enable people to exchange knowledge, skills or services – but using time as their currency); as well as a number of self-management initiatives, including Ca l’Afou, Can Calçada, Aurea Social and L’art du Soleil.

The film-makers from Devon may want to look at similar initiatives in other European countries. For example, in Greece there are a multitude of co-operatives and time banks.

Indeed, Exarcheia (a neighbourhood of inner-city Athens) boasts a network of co-operatives as well as mutual aid centres. Many such centres are in squatted buildings, such as Thermistokleous 58. And there is also EL CHEf, a food collective providing food for homeless people and refugees. Another example of mutual aid is the ADYE health clinic, which operates from a squat and provides patient-centred healthcare, free of charge to the communities in Exarcheia. And since 2015, the majority of the patients treated there are refugees.

And now there is a new project – Exarcheia Net – that provides internet access and networking for refugee housing and solidarity projects in Exarcheia.

But Britain’s experiments in post-capitalism are likely to be quite different from those in Spain or Greece. Or as one CIC member told [pdf p15] the Exeter film-makers:

there isn’t the culture of resistance that there is in Catalonia in the UK. But that’s not to say it’s completely absent, it’s just not the same. Because you’ve got a long history of unionising, worker solidarity, the NHS was one of the first public health systems, so it’s maybe just different rather than nonexistent. But it’s certainly not the same here: people are much more anti-authoritarian just by instinct here than you would get in the UK, I think.

Indeed, while there are many alternative currency projects and co-operatives in Britain, they do not present a direct challenge to the state or capitalism. Perhaps this is because Britain is one of the most regulated societies in the world. This means that creating alternative ways of living and working remains a huge challenge. But as experiences elsewhere in the world show us, building another world is a very real possibility.

– Watch this video about the CIC (in Spanish with French subtitles).

– Read The Leaderless Revolution by Carne Ross, and PostCapitalism by Paul Mason.

– Organise a showing of Accidental Anarchist in your local community centre.