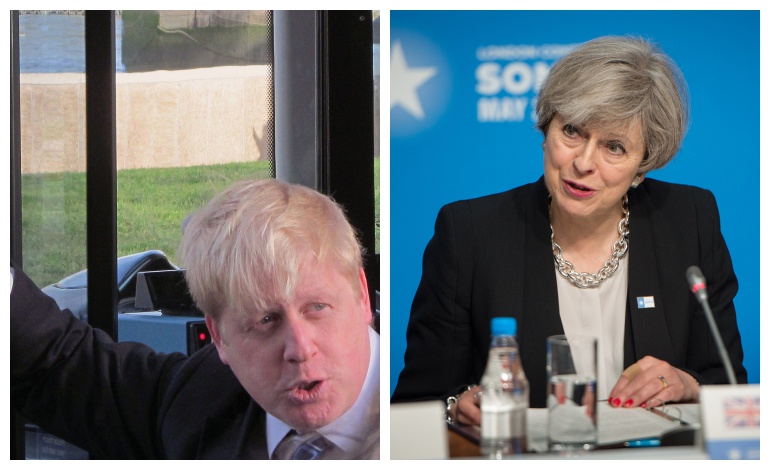 According to Rachel Sylvester, a columnist [paywall] at The Times, Foreign Secretary Boris Johnson is an “international joke”. But Theresa May has defended him. And she seems to be pretty much the only one left with any confidence in him.

According to The Times [paywall], Johnson has become:

the Where’s Wally? of international diplomacy. All over the world the geopolitical tectonic plates are shifting yet at this time of huge global significance the foreign secretary is all but invisible on the international stage.

Strong words from the Rupert Murdoch-owned paper. But it doesn’t stop there. According [paywall] to an “unnamed” Tory MP:

The French think Boris is totally unreliable, the Germans think he’s a liar and the Italians think he’s dangerous. He is undermining our ability to negotiate internationally and degrading our position abroad. The foreign secretary is supposed to enhance Britain’s reputation but all over the world Boris is making matters worse.

According to diplomatic sources, even officials at the Trump White House ‘don’t want to go anywhere near Boris because they think he’s a joke’. If that seems ironic, one minister says: ‘It’s worse in Europe. There is not a single foreign minister there who takes him seriously. They think he’s a clown who can never resist a gag.’

But May has defended Johnson. Despite this attack in The Times, she has been forced to show her support for him. A spokesperson for Number 10 said:

The Prime Minister has a good relationship with Boris Johnson and has full confidence in him. He’s doing a good job.

So despite widespread media criticism for Johnson, May’s immediate support seems to reflect just how weak her leadership actually is.

This is a crucial time for the UK to build strong international relations. But things are not going well. Brexit negotiations are in chaos. And May was criticised for her failure to challenge Trump fully on the actions of America’s far right.

Johnson’s role as Foreign Secretary is vital. But as Sylvester says [paywall]:

On the nuclear threat posed by North Korea, the crisis over Saudi Arabia and Qatar or the clash between the US and China, he is irrelevant. On Syria, Afghanistan, Iraq, Iran, Russia, Venezuela, Turkey and Yemen, he is incoherent

In response to Sylvester’s column, journalist Owen Jones called for May to sack Johnson. In a Guardian column, he said:

May knew the score and only appointed him as foreign secretary to manage the internal schism of her chronically divided party. Clearly the prime minister is in a weak position when it comes to reshuffling her cabinet – especially the most prominent members. Throwing away your political capital in an unnecessary general election, and reducing yourself to a humiliated laughing stock in the process, somewhat limits your room for political manoeuvre. But really, enough is enough.

Parliament will return on 5 September. During the summer recess, there has been ongoing criticism of May’s leadership from traditionally right-wing media sources.

The more criticism like this emerges, the more it seems there could be a leadership challenge on the horizon.

But even if there isn’t, May’s continued ‘support’ for Johnson has done little more than make her sound both desperate and increasingly isolated.

– Support The Canary if you appreciate the work we do. Also, see more from us on Boris Johnson here.