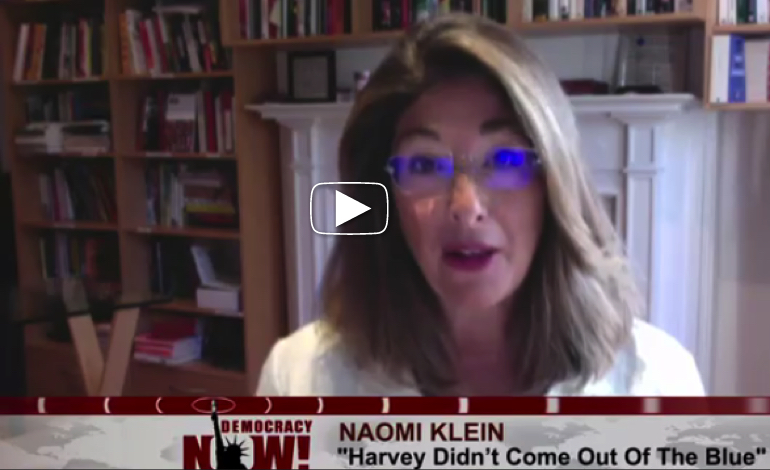 The mainstream media has been tiptoeing around the role of climate change in the floods that have caused death and destruction in both South Asia and Texas in recent days. But award-winning author Naomi Klein just reminded us that there’s a reason these disasters are “unprecedented” and “record-breaking”. And we need to start listening.

It’s not you, it’s climate change

When it comes to the heavy rain and flooding happening in South Asia and the southern US, scientific evidence shows that climate change is undeniably a key factor.

In South Asia, warmer temperatures in the Himalayas have melted more glacial ice. And that has raised the water levels of the nearby Ganges and Brahmaputra rivers. In India and Bangladesh, roughly 500 million people – or 50% of the population – live within those rivers’ flood plains.

On 24 August, the UN said that 41 million people had been affected by flooding and landslides since they started in mid-August. Millions of people have been displaced, and at least 1,200 people have died in India, Nepal and Bangladesh. And with monsoon season lasting from July to September, there is still a month of heavy rain to go.

Meanwhile, in Houston, at least 31 people have died from Tropical Storm Harvey.

Like scientists, the World Meteorological Organization said on 29 August that the strength of Tropical Storm Harvey is likely linked to climate change. But world leaders and mainstream media outlets still aren’t paying much attention.

So in an interview with Democracy Now! on 30 August, Naomi Klein took them to town:

You hear this from a lot of journalists, that they don’t want to politicise a human catastrophe by talking about climate change…

what you don’t hear, or you hear very, very rarely, is an explanation for why the [words] “unprecedented,” [and] “record-breaking”… have become meteorological clichés. We hear them all the time, because we’re breaking heat records year after year…

She also called out US politicians for not only preparing badly for major storms like Harvey, but also for how they’ll likely be rebuilding Houston afterward. She said:

If you deny the reality that the Earth is warming and that humans are a major contributor in this, then you will just go ahead and rebuild the oil capital of the United States exactly how it was, as if there’s no connection between this very industry that is being hit right now… and the storm itself.

In Houston, the fourth largest city in the US, the approach to urban development shows how ignoring climate change paves the way (literally) for more – and worse – natural disasters.

The local government allowed real-estate “developers” to pave over prairie land with concrete. That means Houston has less land to absorb rainwater and prevent the kind of extreme flooding we’ve seen in the past week.

Unlike prairie grass, which can absorb water for days, concrete prevents the ground below it from absorbing rain. So rainfall becomes ‘runoff’, and travels until it finds somewhere to flow – like a stream, a drain, or a home.

From 1992 to 2010, the Houston area lost almost 30% of its freshwater wetlands. One scientist at Texas A&M University called this amount “unconscionable”.

Despite this evidence, Houston’s flood manager denies that climate change is affecting the city – seeing major storms as “freak occurrences”.

But Houston almost borders the Gulf of Mexico, which has been warming. That means more evaporation and more water vapour in the air. So storms in the region now have more water to absorb, and to give off.

The exact same storm that comes along today has more rain associated with it than it would have 50 or 100 years ago.

In 2012, the Union of Concerned Scientists said that “human-caused climate change” is increasing coastal flooding. So we can’t say they didn’t warn us.

The question now is: how many more disasters, deaths and warnings will it take for governments and the mainstream media to take climate change seriously, and take preventive action?