People are standing up to abusive Western mining companies. And they could soon win a massive victory. - Canary Workers’ Co-op 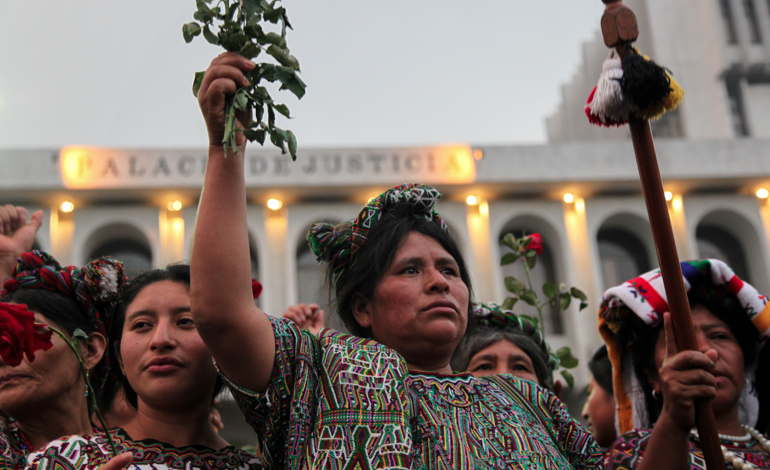 Canada has a reputation for being a polite, tolerant country. But when it comes to Latin America, that stereotype doesn’t hold up. Because Canada’s mining industry has been abusing both indigenous rights and the environment in Latin America, in the name of profit; and the Canadian government is doing little or nothing to stop it.

Indigenous people are standing up to these abusive mining companies, though. And they could be on the cusp of a massive victory.

Mining is big business in Canada. More than 50% of the world’s public mining, oil and gas companies are headquartered there. As the government puts it, “our thriving mining industry” is responsible for one fifth of the country’s exports. And Jeffery Webber, a Canadian political economist who co-wrote Blood of Extraction: Canadian Imperialism in Latin America, told The Canary that Canada has “by far and away” the biggest mining industry in the world.

And when it comes to Latin America, Webber told The Canary:

Canada is involved in imperialist intervention in Latin America as a secondary imperial power. It is obviously not of the same strength of the United States, but its actions are also not reducible to the United States, and it is one of the biggest economies in the world

But there is resistance to this. And hundreds of opposition movements have formed on the ground to disrupt Canada’s natural resource extraction on their land.

On 23 August, for example, indigenous people in Peru took control of oil drums and other facilities at a large oil field near the Ecuadorian border. They asked the government to act on an indigenous rights law before signing a contract with Canada’s Frontera Energy Corp to ‘explore’ for oil on their land.

The oil field, called Block 192, sits along the Marañon River, which flows into the Amazon. Under Peruvian law, the government has to get input from indigenous people before approving new natural resource projects that may affect them.

We are not against oil exploration on our land. We’re only asking the government for a consultation before selling exploration rights for Block 192 for 30 years. If not, our brothers and sisters will rise up, will get out their spears to rebel.

Around the world, government policies and natural resource industries are displacing people from resource-rich lands to allow for ‘development’ projects. At the moment, about 15 million people per year are being removed from their land.

In Canada, meanwhile, a landmark court case is underway. It could be the first time a Canadian mining company is held legally responsible for displacing people, and other abusive actions, abroad.

A group of indigenous people from Guatemala is suing Hudbay Minerals for negligence. In 2007, the residents of an indigenous village whose land ‘belonged’ to the company were evicted, and 11 women were gang-raped.

The Canadian Prime Minister at the time was Stephen Harper. And Webber told The Canary that, under Harper, Canada took a “whole-of-government” approach – through its embassies, foreign aid, and “an entire network of ministries” – to push its business interests in Latin America.

Documents received through Access to Information requests show that the [Canadian] embassy was active in creating a favourable environment for the operation of Canadian companies… At one point, over the issue of land confrontations between Maya communities and Canadian companies, the embassy, in its internal communications, even referred to the Indigenous people as ‘invaders’.

The Council on Hemispheric Affairs (a US thinktank) also wrote, in 2014:

The Canadian government actively assists the extractive industry without requiring that their mining companies respect the environment and human rights.

The Guatemalan Center for Environmental, Social and Legal Action, meanwhile, has called the Canadian embassy’s actions in Guatemala “criminal”. And in July 2017, a Guatemalan court suspended operations at the Escobal silver mine over discrimination and a lack of consultation with indigenous communities whose land the project affects.

There’s no legal infrastructure for holding Canadian companies criminally responsible for activities that they are associated with abroad.

Although current Canadian Prime Minister Justin Trudeau calls himself a feminist and supports LGBTQ+ rights, when it comes to the natural resource industries, it’s essentially business as usual. In 2016, for example, he approved two new oil pipelines in western Canada.

Webber told The Canary that Trudeau’s government is “continuous with the Harper period” in supporting Canadian corporations in Latin America. And this support had also increased in the 1990s, under Trudeau’s Liberal Party. Webber said:

And the basic interest that Canada is still promoting in Latin America is: profit.

But if the landmark lawsuit in Canada succeeds, it could finally force these industries to be accountable for abusing people and the environment abroad. And that would be a massive victory.

– Learn more about grassroots human rights and environmental campaigns in Guatemala and Honduras from Rights Action.

– For updates on the Hudbay lawsuit, see here.