In just one sentence, the government reveals why so many people are facing arrest to stop an arms fair - Canary 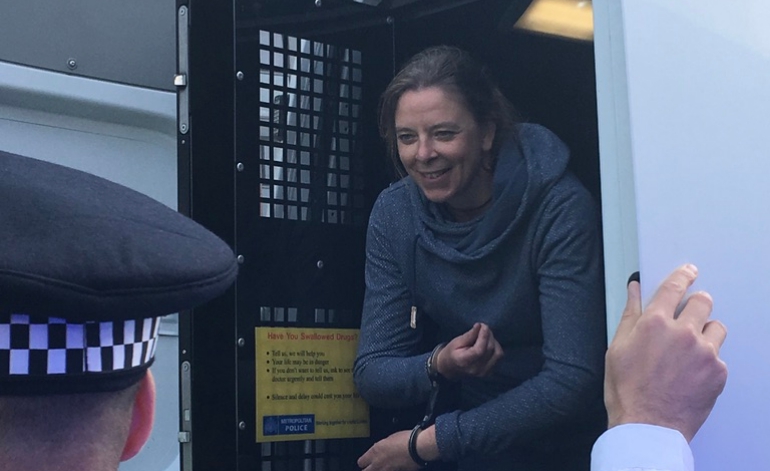 Defence Security Equipment International (DSEI), the London arms fair, starts on Monday 11 September and campaigners have spent the week trying to shut it down before it begins. But it took just one sentence for the government to reveal exactly why so many people are willing to face arrest trying to shut down one of the world’s largest arms fairs.

Stephen Phipson, head of the Defence and Security Organisation at the Department for International Trade (DfIT), stated:

DSEI is one of the best global defence and security networking events and an important opportunity for UK companies to identify joint venture partnerships and industry collaboration.

But it is precisely this relationship that activists want to shut down. And with good reason. In 2015, arms dealers from 61 countries queued up to view the wares of 1,500 exhibitors. 14 of the countries invited, including Algeria and Bahrain, had authoritarian regimes. Four, including Saudi Arabia and Pakistan, have been listed by the UK as having human rights issues. And a further 11 countries on the list, such as Ukraine and Iraq, are currently at war.

Speaking to The Canary earlier in the week, Kat Hobbs from Campaign Against Arms Trade (CAAT) explained the problem:

Arms fairs exist so that buyers can form relations with companies, can get up-close with the kit. If you are one of the military buyers attending DSEI, you can have a tour of the warship, you can get behind the controls of a tank, you can go into one of the private side rooms and drink champagne with some of the arms-industry executives that you’re going to be dealing with and striking these really big deals… The kind of handshakes and relationship-building that happen at the DSEI arms fair is how arms sales happen.

In other words, the reasons why the government want to promote DSEI are exactly the reasons protesters think it should be shut down.

At the time of writing, 67 people had been arrested. As The Canary previously reported, actions have been taking place throughout the week. And Wednesday 7 September was no exception.

Veterans for Peace were present: 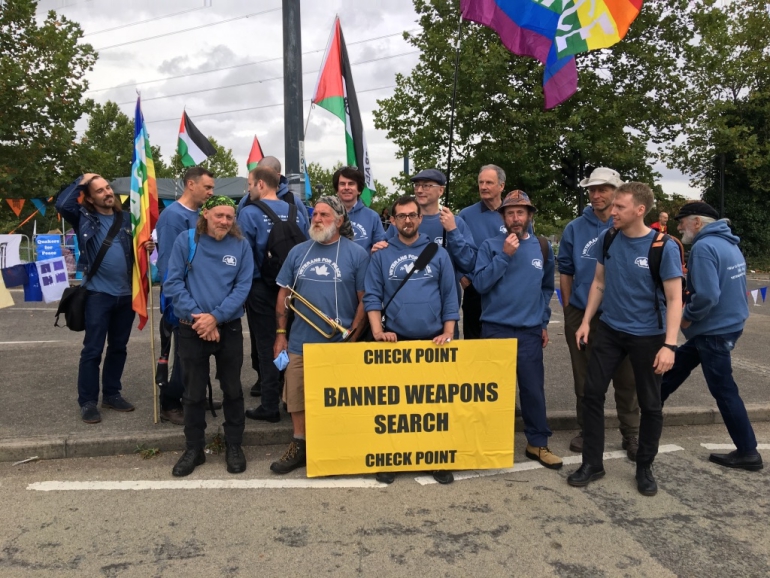 They attempted to set up a check-point to investigate deliveries for illegal weapons. They even asked a police inspector to use his powers to stop and search vehicles. He refused and stated that he didn’t have any reasonable suspicion that illegal weapons would be on sale. Which is strange. Given there’s plenty of evidence to the contrary from past DSEIs.

Meanwhile, Food Not Bombs served lunch in the road: 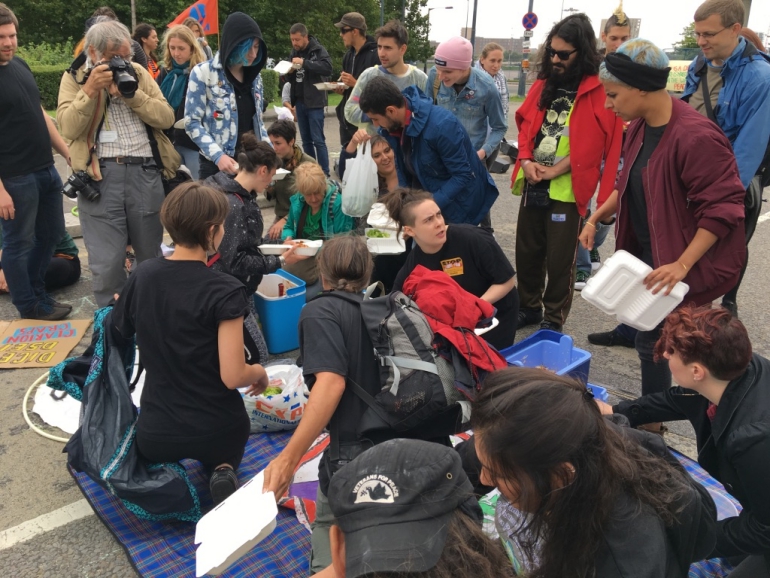 And people ate under the watchful gaze of the police: 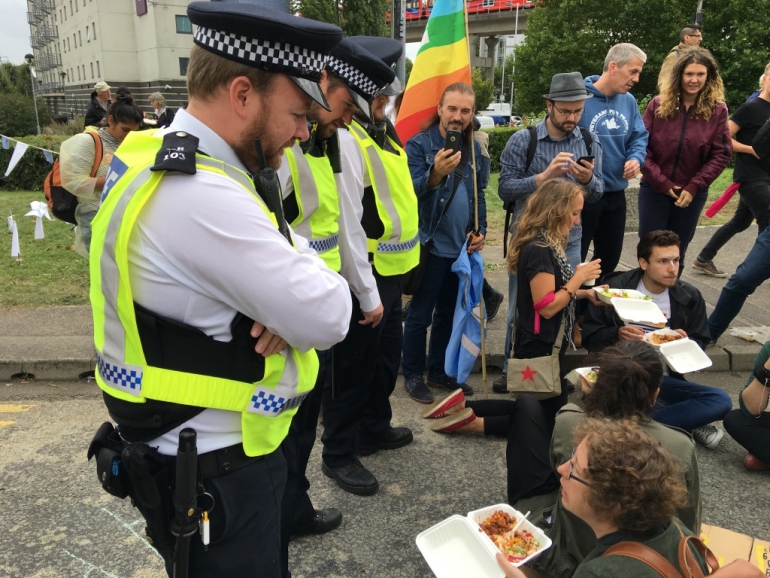 Later in the afternoon, more deliveries were blocked with protesters getting underneath and climbing on top of vehicles: 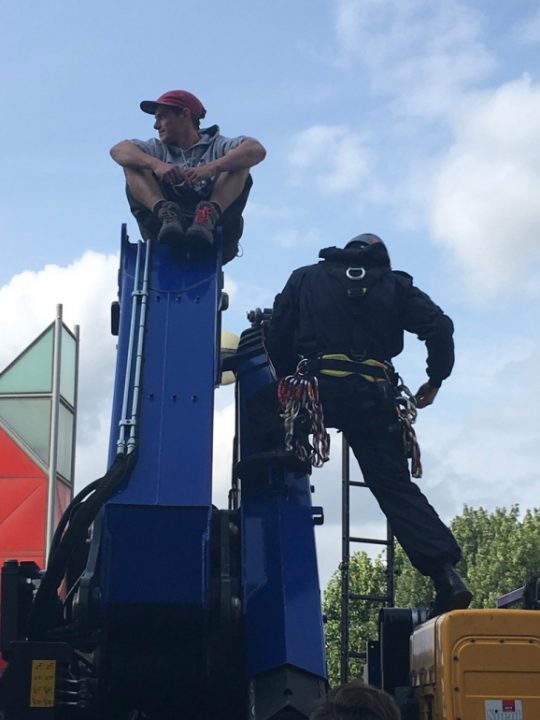 And inevitably there were arrests: 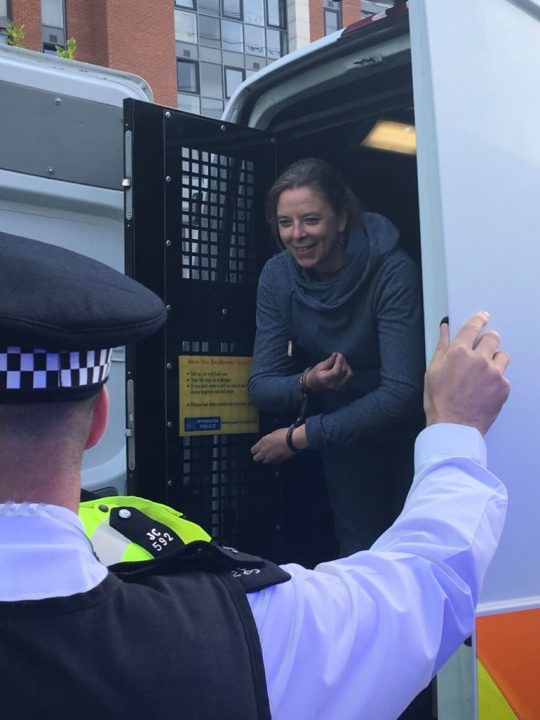 Two activists climbed underneath a trailer taking a military boat to the fair. In a statement seen by The Canary, one of them said:

I’m here because the companies exhibiting at DSEI are making money from conflict, repression and the consequences of war. This trade fuels violence, and then profits from the border systems, detention centres and militarisation that result from it. We need to dispel the myths around the economic benefits of the arms trade, stand in solidarity with those affected by conflict and bring an end to this climate of fear.

And Andrew Smith from CAAT told The Canary:

The week of action has been inspiring, and has mobilised activists from all over the country. The reason so many campaigners have been prepared to put their bodies on the line and risk arrest is because we know the arms sold at DSEI could be used in abuses and atrocities for years to come. DfID might claim that this is about promoting UK business, but the results can be devastating.

Judging by a video from one person who got inside the ExCeL centre where the arms fair takes place, the actions are having an impact; as the venue doesn’t seem to be very prepared to welcome arms dealers at present:

Protests against DSEI continue to take place, including a Big Day of Action on Saturday 9 September. And as one protester previously told The Canary:

None of us have to put up with this trade in death and destruction. And we can do something about it. Come down to the ExCeL Centre and show the arms dealers and the government that we won’t let them continue selling their murderous wares.