Grab your popcorn. This showdown between Philip Hammond and John McDonnell is everything. - Canary 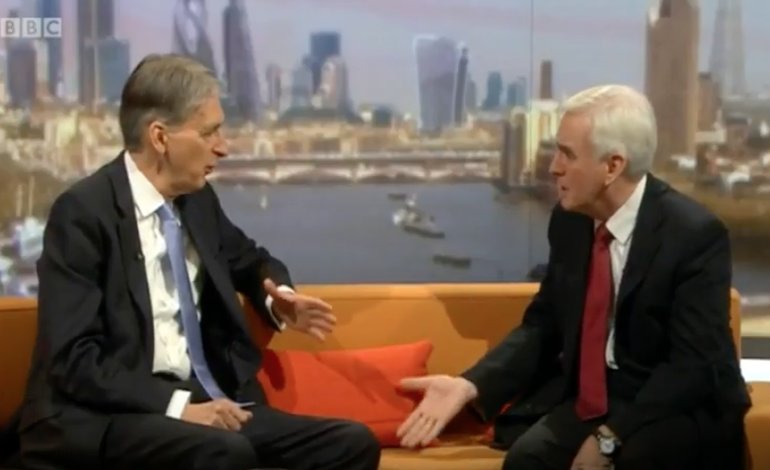 Chancellor Philip Hammond boasted about his wealth to a Conservative gathering this week, during a discussion about rising poverty. While the audience laughed, rumour of the talk made its way to Labour Shadow Chancellor John McDonnell. And he lit the blue touch paper.

On 6 September 2017, Hammond went before the powerful 1922 Committee of backbench Conservative MPs. This is the group that tends to make or break party leaders.

First, he is said to have made some disparaging remarks about his boss, the Prime Minister. He apparently quipped that the economy was all but absent from May’s election campaign, only being raised “on the rare occasions I was allowed to go out [to] talk in the campaign”.

But the comments that played worst outside the room were those made during a discussion about declining opportunities for young people. The Chancellor with a personal fortune of £8m is said to have joked that unlike those young people, he and the committee didn’t have to deal with money worries.

The joke made its way to McDonnell, who responded on behalf of Britain’s non-millionaires, saying:

It is shameful that the millionaire chancellor Philip Hammond feels comfortable boasting about how he and Tory MPs have never had more money in the bank, while cutting the pay of nurses, teachers and police officers.

He is already thought to be one of the richest MPs in parliament and in March he point-blank refused my request to publish his tax return. He should come clean and tell us what he earns and from where.

This Tory Government is completely divorced from the reality of the majority of people’s lives. They have enriched themselves and a privileged few while inflicting austerity on the many.

What we have seen from what he [Corbyn] does in this house and outside this house is consistently stand up and ask for more money to be spent on ‘this, that and the other’.

Just as May’s ‘joke’ belittled the crisis facing public sector workers, Hammond’s belittled the plight of young people. Five years into the Conservatives’ austerity programme, youth unemployment hit its worst levels for 20 years. By 2015, 14.4% of 16-24 year olds were unable to find a job, and three times more likely to be out of work than other age groups. And the poverty rate among young people reached 30%.

The ripple effect of unemployment, student debt and rising prices means young people are finding it ever harder to buy a home. In the UK, fewer young people own their own home today than a quarter of a century ago. In 1992, 63% of 25-29 year olds owned their own homes. By 2017, the figure had plummeted to just 31%.

But this is not strictly a UK problem. Or a single government problem. It’s a systemic problem.

A collaborative research project by The Guardian and the Joseph Rowntree Foundation revealed that:

A combination of debt, joblessness, globalisation, demographics and rising house prices is depressing the incomes and prospects of millions of young people across the developed world, resulting in unprecedented inequality between generations.

Where 30 years ago young adults used to earn more than national averages, now in many countries they have slumped to earning as much as 20% below their average compatriot.

The findings reveal the fruits of 30 years of bad economics; the neoliberal policies ushered in by the Thatcher government in 1979, and expanded by all governments since. People aged under 30 are poorer today than they were when Thatcher came to power. Those governments in Europe and around the world who followed suit have the same or similar results.

A major barrier to resolving this crisis is that parliament (and media) have become unrepresentative of the wider population. While only 2% of the UK population are millionaires, 60% (18 out of 29) of David Cameron’s government were at one point. And while home ownership in the UK is at its lowest for 30 years, one in five MPs is a landlord. When it comes to educational background, just 7% of UK children go to public school. But nearly a third of MPs are privately educated at fee-paying schools. They are living in a different world.

Worse, these numbers are replicated almost perfectly in UK media.

So the democratic body charged with representing the interests of all UK citizens is entirely unrepresentative of those citizens. And so is the media tasked with holding it to account. Meanwhile, living standards for working and non-working people alike continue to fall.

We don’t need jokes from Philip Hammond, we need solutions. But with his party fully committed to neoliberalism and austerity, he seems ill equipped for that task.

Learn about and support the Living Wage here.

Learn about new and better economic solutions at the New Economics Foundation and Positive Money.