Horrific footage of atrocities in Myanmar has emerged. But the world just watches on [VIDEO] - The Canary 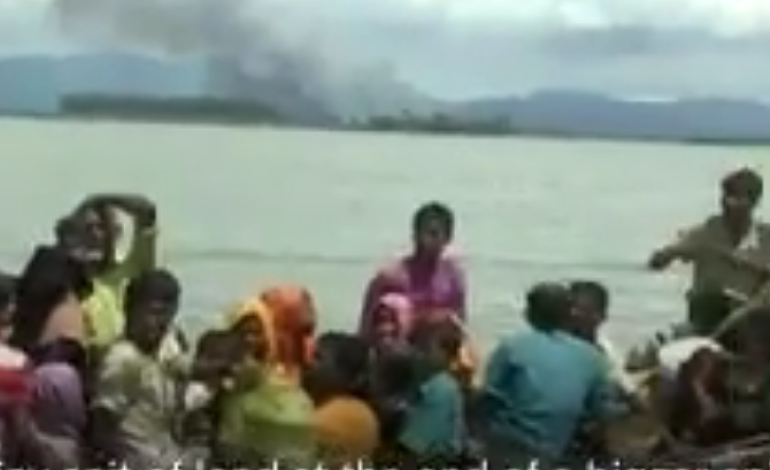 More shocking video footage has emerged of alleged atrocities against the Rohingya of Rakhine state, Myanmar. The Canary previously reported allegations of similar atrocities as 60,000 Rohingya fled the Burmese military for neighbouring Bangladesh.

But within weeks that figure has reportedly increased to almost 400,000. Meanwhile, world powers are yet to properly intervene to prevent further tragedy.

Unverified video footage published by the Australian Broadcast Corporation’s flagship programme Lateline claims to detail recent atrocities. One video purportedly shows human remains amid the ashes of a home allegedly burned down by police and Buddhist extremists earlier this month. Another video claims to show the bodies of dead children, allegedly shot by Myanmar police, that were washed up from the Naf River.

Other anecdotal reports appear to support these claims.

Channel 4 News reported on the situation:

Aung San Suu Kyi has called the Rohingya issue an “iceberg of misinformation”.

Here’s the reality from refugees in neighbouring Bangladesh. pic.twitter.com/hWpQvzC2HP

The United States Holocaust Museum warned of genocide in Burma (Myanmar). And in February the UN Refugee Agency (UNHCR) reported on allegations of “mass gang-rape, killings – including of babies and young children, brutal beatings, disappearances, and other serious human rights violations“ in northern Rakhine.

More than 80 large-scale fires have been started by Myanmar security forces in inhabited areas of northern Rakhine State since 25 August, according to Amnesty International.

Fellow Nobel Peace Prize Laureate Archbishop Desmond Tutu was also critical, and he did not mince his words:

If the political price of your ascension to the highest office in Myanmar is your silence, the price is surely too steep. A country that is not at peace with itself, that fails to acknowledge and protect the dignity and worth of all its people, is not a free country. It is incongruous for a symbol of righteousness to lead such a country; it is adding to our pain.

The number of refugees fleeing Myanmar since the latest round of violence began in August is estimated at around 400,000. According to UNICEF over half are children. And one estimate puts the number of refugees arriving at the Bangladesh border as 10,000 or more every day, with some claiming double that figure.

Bangladesh Foreign Minister AH Mahmood Ali has accused the Myanmar government of committing genocide against the Rohingya. He added that the latest influx means the total number of refugees who have fled Myanmar is more like 700,000.

The UN has unequivocally condemned the Myanmar regime, calling its campaign against the Rohingya “textbook ethnic cleansing”. But there has been no real intervention, apart from the provision of emergency aid and staff.

United Nations Secretary-General António Guterres called for Rakhine state to be granted a legal status that would allow the Rohingya to lead a normal life:

I call on the Myanmar authorities to suspend military action, end the violence, uphold the rule of law, and recognize the right of return of all those who had to leave the country.

The Rohingya have been described as the world’s most persecuted minority. Their persecution is everyone’s shame.

– Read more on Myanmar and the Rohingya crisis from The Canary, Amnesty International and Human Rights Watch.