Nicola Sturgeon's government just waded into a democratic crisis in Spain, while Theresa May is silent - The Canary 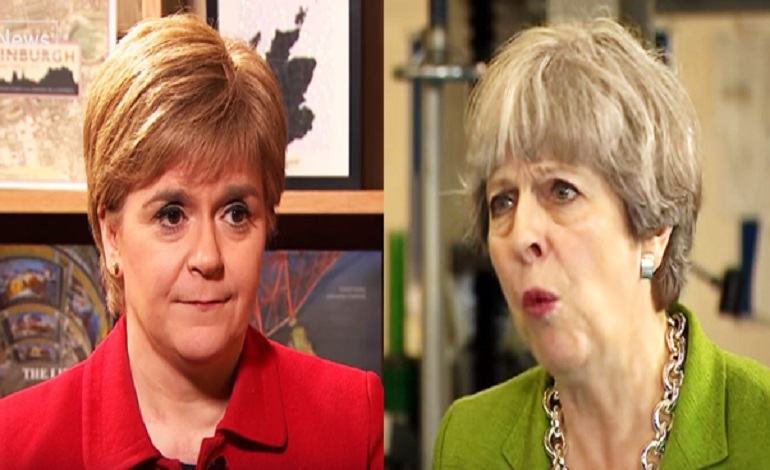 The Scottish government has waded into a democratic crisis currently unfolding in Spain.

The escalating tension between the Spanish government and the autonomous Catalan administration over a proposed independence referendum has seen Catalan politicians, including its President, threatened with arrest, and press offices threatened with court action. And yet, while Nicola Sturgeon’s administration has voiced its concerns, Theresa May’s government has remained silent.

The Catalan government is trying to hold an independence referendum on 1 October. It comes after a coalition of pro-independence parties were voted into power in Catalonia’s 2015 elections. But the Spanish government is trying to block the referendum, saying it is against Spain’s constitution which states the country is “indivisible”. And Madrid, Spain’s governing city, is going to great lengths to shut the referendum down.

The decision over Catalonia’s future direction is a matter for the people who live there, and the Catalan and Spanish Governments are perfectly entitled to take positions for and against independence. However, all peoples have the right to self-determination and to choose the form of government best suited to their needs, a principle which is enshrined in the UN Charter.

The Edinburgh Agreement was an example of how two governments, with diametrically opposed views on whether or not Scotland should become independent, were able to come together to agree a process to allow the people to decide. It is essential that democracy and civil rights are respected in all countries.

Hyslop’s statement raises three important issues: the UN Charter, and the subjects of democracy and civil rights. Because it appears to many that the Spanish government, at present, is trying to flout all three.

Reports have been coming out of Catalonia that the Spanish government has:

As Al Jazeera reported, the Catalan President, Carles Puigdemont, has said of the referendum:

But Spain’s Conservative Prime Minister, Mariano Rajoy, said laws passed by the regional government connected to the referendum were “illegal and anti-democratic”, adding:

And on 17 September, Spain’s Attorney General indicated he would be willing to arrest President Puigdemont to stop the referendum.

As Hyslop argued, though, pro-independence Catalonians seem to have the UN, in words if not in deeds, on their side.

The UN Charter states that one of its purposes is:

To develop friendly relations among nations based on respect for the principle of equal rights and self-determination of peoples.

Critics of the Spanish government argue that the UN Charter does, in theory, override Spain’s constitution. And a look at Catalan history shows that pro-independence supporters may well have a case for a referendum.

Catalonia, in the northeast of Spain, has the economically and culturally important Barcelona as its capital. It has a history of autonomy from the rest of Spain stretching back as far as the 10th century, when the previously named County of Barcelona won independence from the Carolingian Empire. But Catalonia, as it is now, has broadly been part of Spain since the 15th century. And the question of its independence has remained ever since.

Most notably, the area was a key Republican stronghold during the Spanish Civil War, but the fall of Barcelona to fascist General Franco marked the end of the nationwide struggle. After that, Franco imposed severe restrictions on Catalonians, not allowing their language to be used, banning pictures and symbols related to Catalan autonomy, and restricting its traditional culture.

After Franco’s death, the newly formed Spanish government granted Catalonia more autonomy in 1978/79. In 2006, the Spanish government passed the Catalan Statute of Autonomy, giving the nation even greater powers over its own laws and finances. But in 2010 the government backtracked; the constitutional court declared 14 parts of the statute “unconstitutional” and restricted the Catalan government. So, the current Catalan independence movement grew, in part, out of this.

Some pro-independence supporters also argue that the Spanish government is trying to keep hold of Catalonia for financial reasons. While the nation only makes up 16% of Spain’s population, it is responsible for:

The Catalan government also argued in 2015 that Spain takes between €11-15bn a year more from Catalonia than it puts in. But Madrid disputed this; somewhat paradoxically arguing it only takes €8.5bn a year. Also, the Catalan government has argued that if it did get independence, it would be financially stable due to retaining various international trade deals.

Spain and Catalonia: a question for all of us

But it’s the cultural identity and politics of Catalonia which is at the heart of many pro-independence supporters’ arguments. As Teresa Forcades wrote in The Guardian:

Many in Catalonia expect that [independence] will elicit a political debate from the bottom up that could radically rethink our economic system, so that in the new Catalonia people and their basic needs cannot be treated as commodities… My other motivation in wanting independence for Catalonia is the fostering of cultural diversity… Our language and traditions are the result of complex processes of cultural cross-fertilisation and, as long as they are alive, I expect them to continue happily resisting rigid definition.

With just over a fortnight to go until the nation’s planned independence referendum, the situation is fluid. There are numerous comparisons that can be drawn from Catalonia’s desire for independence and Scotland’s: a long, complex history; an autonomous, culturally diverse population and a central government seen by many as ineffective and ‘unionist’.

But, with its current actions and position, the Spanish government is developing a worryingly authoritarian stance. With the intervention of Sturgeon’s government, May must now step in with some diplomatic force. Catalonian’s have a right to self-determination, like every person on the planet. And regardless of the outcome on 1 October, this country’s history shows that its people have a right to be asked the question in the first place.