The Independent says IDS thinks bosses should be "killing" their workers. And it's not far wrong [IMAGES] - Canary 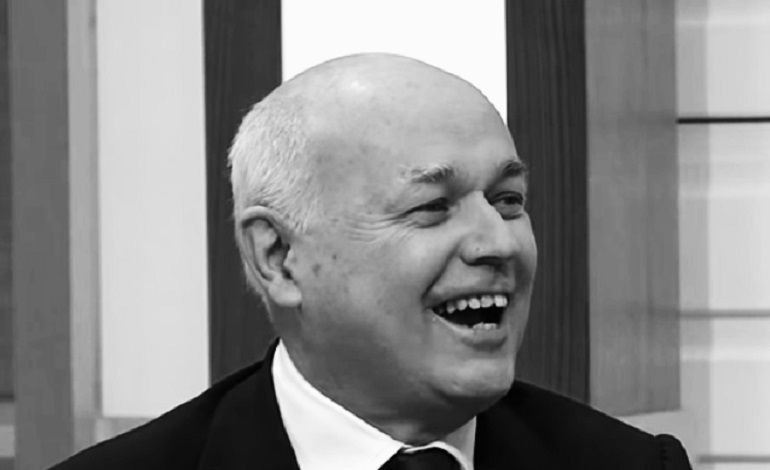 On Monday 18 September The Independent reported that Iain Duncan Smith (IDS) thinks “businesses have a role to play in ups killing their workforce”. And while the typo was obvious, intentional or not the sentiment was maybe not far wrong. Because a new report by IDS’s think tank says UK employees aren’t making their bosses enough money.

Kill them. Kill the workers

A typo by The Independent in what’s known as the ‘standfirst’ was obvious: 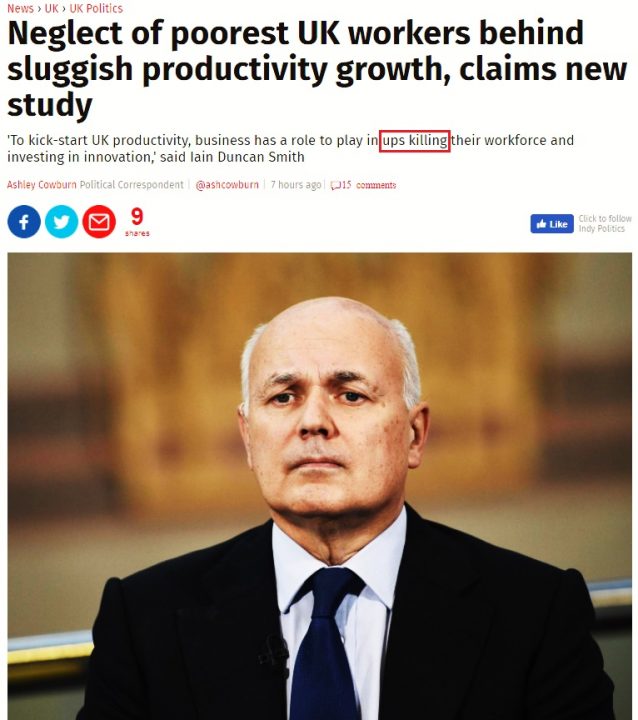 And to add insult to injury, The Independent’s “ups killing” quote from the former Work and Pensions Secretary appeared again:

But the error pointed neatly towards a report by the Centre for Social Justice (CSJ), which IDS chairs. Called The Great British Breakthrough, it attempts to deal with what the CSJ describes [pdf p12] as the “post-recession economic zeitgeist” productivity problem. The definition of productivity is broadly how efficiently capital (money spent) and labour (the worker) are producing goods or services. It is usually measured in output per worker, or output per worker hour.

a call for government to reconsider productivity as an issue that can be best solved by breaking down social injustices that cause poverty and empowering the most disadvantaged by giving them opportunity to thrive. Productivity is so often seen as an abstract economic phenomenon, when in fact it is shown here to have dire social consequences for those most in need across our society…

But the CSJ’s reasons for low productivity, and what it think needs to be done, are typically conservative in nature. And could have us all working until we drop.

But… But… the financial crisis!

The CSJ says that since the 2008 financial crisis:

But what IDS’s think tank fails to acknowledge is that since 2008:

Never mind, though. Because IDS’s think tank believes the productivity problem has been caused by:

But the CSJ is ignoring the fact that:

The CSJ says that to solve the productivity problem the UK must:

Its thinking, though, ignores the reality of the situation in the UK. Because since the Tories first came to power in 2010:

But most worryingly is the CSJ claim [pdf p14] that IDS’ welfare reforms:

have helped 3.1 million people into work since July 2010, some for the first time in generations.

This ignores four separate reports from the UN in just 14 months. And they all say that IDS’ welfare reforms have caused poverty, mental and physical damage to people, especially disabled people – and that they should be reviewed or scrapped altogether.

Get in the sea

The CSJ’s report shows the detached nature of Tory politicians like IDS. Because, even though the facts fly in the face of his and his think tanks’ theory, they both still blunder on regardless.

The report is a perfect example of crony capitalism on its last legs. Instead of actually paying a decent wage, closing the gap between fat cat executives and workers, and making corporations pay their fair share, IDS and his think tank believe workers need to work harder and make more profit for their bosses. Only then can they be lifted out of poverty; poverty which, of course, the Tories and businesses helped create in the first place.