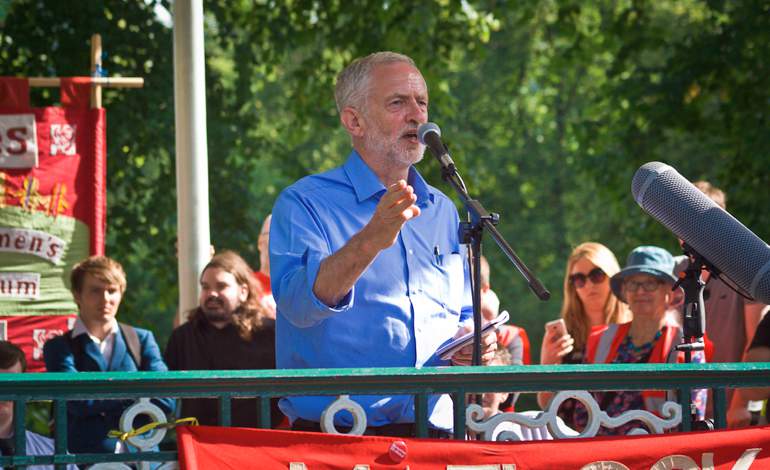 On 24-27 September, Labour will have its annual party conference, where members from around the country vote on new party policies. The proposed policy getting the most attention has to do with antisemitism in Labour. And as The Canary previously reported, it’s a potentially dangerous change to the rules.

But the Hastings & Rye Constituency Labour Party (CLP) has proposed its own ‘rule change’ on antisemitism and other kinds of racism. The question now is whether it will get the notice it deserves.

The Labour Party has a rule book that lists the party’s internal policies (and is surprisingly hard to find online). The ‘Membership’ section defines [pdf, p8] membership and gives criteria for suspending or excluding people from the party.

‘Prejudicial’ behaviour is one of the acts that can [pdf, p9] lead to exclusion. But the rules say [pdf, p9]:

The NCC [National Constitutional Committee] shall not have regard to the mere holding or expression of beliefs and opinions.

As The Canary reported, that is exactly what the openly Zionist Jewish Labour Movement (JLM), supported by several CLPs, wants to change. It would add [pdf, p1] to that sentence: “except in instances involving antisemitism, Islamophobia or racism”.

In response, the group Free Speech on Israel (FSoI) says this amendment would “punish thought crime”:

It is a principle of British law that it is actions that lead to sanctions, not thoughts. Thoughts are only of interest to tribunals when manifested in words or actions. Only totalitarian regimes seek to control our thoughts…

That’s not the only issue here. The JLM has affiliations with the World Zionist Organisation (WZO). The WZO, in addition to promoting Zionism, has a “settlement division”. Through that, it takes part in the occupation of the West Bank.

And Naomi Wimborne-Idrissi, the press officer for Jewish Voice for Labour (JVL) and chair of FSoI, told The Canary that the JLM’s motion is “informed” by the International Holocaust Remembrance Alliance’s definition of antisemitism, which includes [pdf, p2]:

Because of this, many people think the JLM’s motion is about shutting down criticism of Israel and Zionism within Labour. Here’s how the FSoI sums it up:

Putting the rule changes together: if any Zionist thinks I am thinking an antisemitic thought, that is enough to get me expelled from the Labour Party.

In response to the JLM’s motion, Hastings & Rye CLP passed its own change to the rule book, endorsed by the JVL. It would add this paragraph to the Membership section:

A member of the Party who in the opinion of the NEC engages in intentional anti-Jewish or racist abuse in public or in writing shall be deemed to have engaged in conduct prejudicial to the Party… Hatred of Jews shall not be evidenced by non-abusive words or actions regarding Israel or Zionism that are part of legitimate political discourse.

And unlike the JLM’s proposal, the ‘Hastings Rule’ calls for a party-wide process to evaluate and investigate antisemitism and other kinds of prejudice. Wimborne-Idrissi told The Canary:

What we can’t have is people just being suspended because somebody says ‘That person has done something I consider to be antisemitic’ – when in fact they said something rather rude about Israel. Which is what has been happening.

If you’re genuinely guilty, and there is evidence that you have been guilty of actions motivated by hatred of Jews, you should be disciplined. If there are allegations that are to do with Israel or Zionism, apartheid, racism, anything like that – which are in fact ways of supporting the Palestinian cause – then you can’t be assumed to be antisemitic. There has to be a proper process. And there’s no proper process at the moment.

As The Canary previously reported, the JLM’s rule change has ties to the right wing of the Labour Party. For some people, it’s a deliberate power grab – a way to get Jeremy Corbyn out of power and get the ‘Labour right’ back in.

As The Canary‘s Kerry-Anne Mendoza wrote of the JLM’s proposal:

This is not an issue because antisemitism doesn’t exist in Britain, or because it doesn’t exist on the left. It exists in both… But neither should anyone weaponise it in order to defend the actions of an apartheid state. Or in the case of the Blairites, to support such moves in order to smear political rivals.

Of course, using antisemitism as a political weapon can itself be very offensive to Jews, or even antisemitic. But no one seems to be calling that out.

Labour members will vote on the JLM’s motion at the party conference – and Corbyn himself backs it. But the party’s National Executive Committee (NEC) has apparently been trying to reword the amendment.

People throughout the Labour Party agree that antisemitism and other kinds of discrimination and oppression need addressing. But a rule like the JLM’s risks focusing the party’s attention on criticism of Israel rather than on domestic issues of antisemitism and the lived experiences of British Jews.

So including the Hastings Rule at the conference would be a crucial step forward.

– Listen to the CanaryPod podcast on antisemitism in Britain.