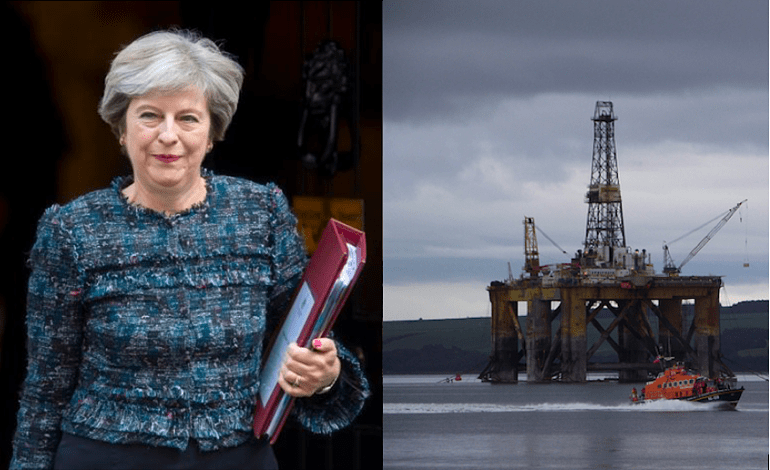 A new Greenpeace report has exposed the toxic relationship that Theresa May’s Conservative government has with oil and gas corporations.

Unearthed, Greenpeace’s investigative unit, has obtained a document showing that Trade Minister Greg Hands visited Brazil to talk about extracting fossil fuels in the country. He was reportedly representing the interests of oil and gas corporations, pressuring Brazil to relax its environmental regulations. And the Department for International Trade (DIT) didn’t want anyone to know about this.

This is not only problematic because of its potential consequences for climate change; but also because, even if Hands was trying to prioritise financial benefit to the UK over environmental concerns, such a policy could cost the UK big time in the long run.

What the document says

The unredacted telegram says that during a “private breakfast” in Rio de Janeiro, BP, Premier Oil and Shell told the Trade Minister about their concerns with “taxation” and “environmental licencing” in Brazil. Hands then allegedly raised these issues “directly” with Paulo Pedrosa, Brazil’s deputy minister for mines and energy.

Rebecca Newsom, senior political adviser at Greenpeace, explained why this behaviour from the DIT is so shocking. She said:

This is a double embarrassment for the UK government. Liam Fox’s trade minister has been lobbying the Brazilian government over a huge oil project that would undermine the climate efforts Britain made at the UN summit in Bonn. If that wasn’t bad enough, Fox’s department tried to cover it up and hide its actions from the public, but failed comically.

Ministers attended the international climate change summit in Bonn, Germany, proclaiming that the UK was leading the way in terms of cutting greenhouse gas emissions. But relaxing environmental and tax regulations for oil and gas giants seems to fly in the face of this aim. Greenpeace accused the DIT of being a “lobbying arm of the fossil fuel industry”. But a DIT spokesperson said:

it is absolutely not true that our ministers lobbied to loosen environmental restrictions in Brazil – the meeting was about improving the environmental licensing process, ensuring a level playing field for both domestic and foreign companies, and in particular helping to speed up the licensing process and make it more transparent, which in turn will protect environmental standards.

The spokesperson also mentioned supposed benefits that oil and gas companies bring to the UK economy, but apparently failed to mention the financial costs of fossil fuels.

While empowering the fossil fuel industries may have short-term benefits for some, the long-term financial cost of climate change can’t be ignored. Recently, Labour’s John McDonnell even insisted that budget calculations should factor in the economic impact of climate change.

Climate change is associated with extreme weather events, including flooding, which cost the UK billions of pounds. And these financial costs are nothing when we consider the catastrophic consequences of not tackling global warming. Rising sea levels could end up submerging coastal regions of the UK, as well as low-lying areas like the Fens and the Somerset Levels.

This Greenpeace document emphasises the government’s shoddy approach to tackling climate change. It talks about reducing carbon emissions but acts quite differently. And it has been courting Brazil’s government even at a time when the country is plagued by corruption and worsening human rights abuses.

In short, it seems clearer and clearer by the day that the Conservative government is prioritising business over human rights and the environment. And we mustn’t let that continue.