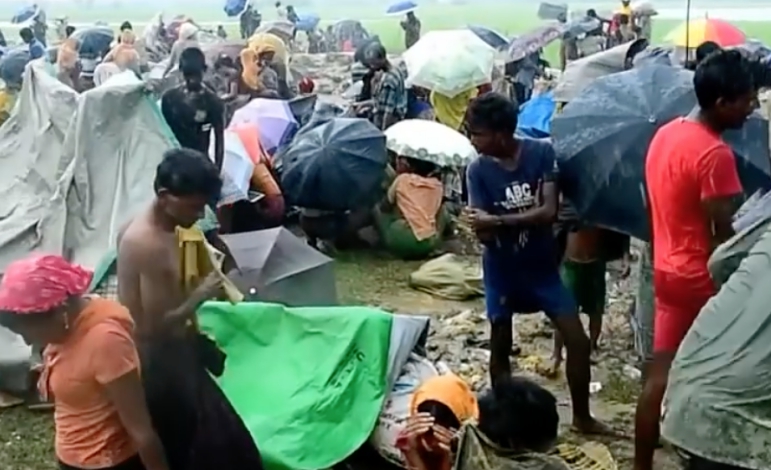 A video preview of a new Levellers single reminds us all of the perils faced by millions of refugees. And of our responsibility to assist them. It also coincides with news that Australia is reportedly attempting to permanently separate the families of refugees, held illegally.

The single, “The Shame”, includes the lyrics:

Did you sleep well in bed, safe, warm and cosy. Do you hope someone finds a solution overnight?… Ah, you’d like to help, but sadly you haven’t the time.

Computer engineer Arash Shirmohamadi is one of several refugees who, reportedly, are subject to this cruel practice by Australia. In 2013, after fleeing persecution in Iran because of his Baha’i faith, he was forced by Australia to go to the tiny Pacific island of Nauru. Since then he has attempted suicide, and suffers seizures and paralysis.

In March 2016, he married a Somalian refugee woman, also detained on Nauru. She became pregnant and was later flown to Australia to receive medical treatment, after complications arose; though her husband was forbidden to join her. Four days after his daughter was born, an Australian Border Force official emailed Shirmohamadi a form to sever his parental rights to his child. The form said: “I hereby agree to relinquish custody of my minor child… I understand that by signing this agreement the non-custodial parent will not automatically be able to seek reunification with my child and that this may mean permanent separation”.

Officials told Shirmohamadi he could apply to the US for resettlement, but that his wife and daughter would not be allowed to join him. However if his family decided to return to Nauru, there would be no guarantee they or he could be resettled.

In any case, Shirmohamadi’s wife was told by doctors not to return to Nauru because of medical issues.

Border Protection denies encouraging refugee families to separate. However, a recorded conversation of a Border Force employee with Shirmohamadi appears to contradict this assertion:

This is not OK, ever. RT @GuardianAus: This is part of the phone call, obtained by the Guardian, in which Border Force advocates for Shirmohamadi to accept the permanent separation of his family in order to be resettled in the US https://t.co/lpVjoKKhQU pic.twitter.com/HN4Ppx3XIw

And The Guardian claims that immigration staff have confirmed that family separation is deliberately applied.

Placing people in a position where they have to make an impossible decision – one that may have lifelong ramifications – to choose between their families and an option to live in a safe country with a feasible future is unacceptable.

Australia’s offshore detention centres have been the subject of criticism in reports by: UN High Commissioner for Human Rights, the Committee Against Torture [pdf], the UN Special Rapporteur on Torture [doc], the Australian Human Rights Commission,, Amnesty International, and Human Rights Watch.

Many refugees on Nauru have been in detention for four years or more. And an Australian leading barrister agrees that they have every legal right to travel or be rescued by a safe, third-party country.

But the same can also be said for all refugees who flee oppression or war. According to UNHCR figures, there are more than 65 million forcibly displaced persons and 22 million refugees worldwide. And the vast majority of them are not getting the support and help they so desperately need and deserve

– Read The Canary‘s articles on refugees.

– See three examples of the many incidents of refugee abuse listed in The Guardian’s ‘Nauru Files’ here, here, and here.