Just why is a hashtag from the other side of the world trending right now? [TWEETS] - Canary 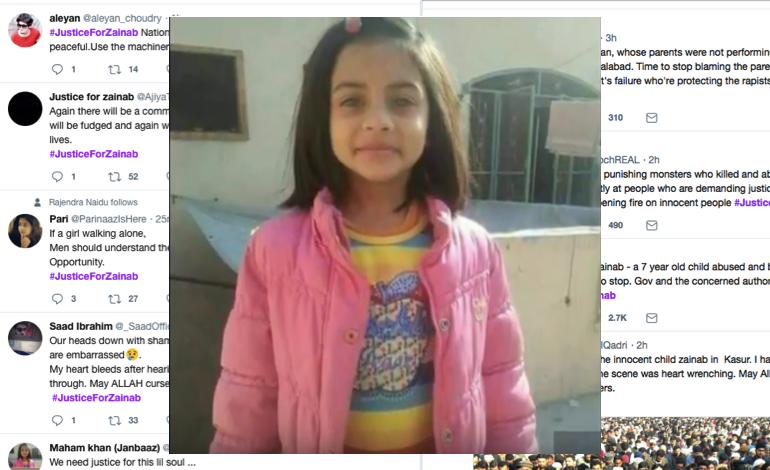 The murder of a seven-year-old girl in Pakistan has been followed by outrage that police are not doing enough to find her killer. This has led to an outpouring of condemnation on the streets and also on social media under the hashtag #JusticeForZainab.

Now politicians, celebrities and the public are following her case closely and demanding justice.

The young girl called Zainab reportedly went missing on her way to a tuition centre on 4 January in Kasur in Pakistan. A missing persons report was filed on 5 January. And she was found dead in a rubbish pile on 9 January.

CCTV footage reportedly showed the girl with a strange man, while an autopsy report confirmed that she was raped.

People are angry, not just because of the horrendous act against someone so young, but because of perceived police inaction. This is the 12th similar case to occur in just a two-kilometre radius in the last year. And the district has a legacy of abuse against children.

Zainab’s parents were out of the country at the time of the incident, performing a pilgrimage. She had been staying with her aunt. The parents returned on Wednesday 10 January.

Standing outside the airport in Islamabad, Zainab’s mother simply said:

I have nothing to say, I just want justice for my daughter.

The culprits have even been identified but the police has not made any progress.

We will not bury her until we get justice.

In a rare moment of unity in Pakistan, politicians from all parts of the political spectrum are demanding justice for Zainab. Along with them are celebrities, cricketers, and even Nobel peace prize winner Malala Yousafzai.

I hope and pray the culprits are not only brought to justice but made an example of. pic.twitter.com/oUxhnHjP3Q

The condemnable & horrific rape & murder of little Zainab exposes once again how vulnerable our children are in our society. This is not the first time such horrific acts have happened. We have to act swiftly to punish the guilty & ensure that our children are better protected. pic.twitter.com/9f7OM3hYT1

The horrific crime perpetrated in Kasur is devastating. Pakistan needs to reevaluate how it deals with such crimes, especially those against children. My prayers and heartfelt sympathies with the family. We must all stand with victims of abuse. https://t.co/YLEmW5sBXU

Heartbroken to hear about Zainab – a 7 year old child abused and brutally killed in Kasur, Pakistan. This has to stop. Gov and the concerned authorities must take action. #JusticeForZainab

The hashtag #JusticeForZainab has been trending in Pakistan, India and the UK.

But protests have already broken out in Kasur. And police have reportedly fired on the crowd, killing two people.

These people that are protesting do not have a leader, they are not being led.

They are all protesting because they feel unsafe.

Lack of justice, police inaction, and corruption are nothing new in Pakistan. And campaigners have been demanding reform for long enough. But something as depraved as the killing and rape of a child is far too cold a deed to ignore. The people are demanding justice and the world is bearing witness as to whether it will be served.

– Read more articles from The Canary on Pakistan.