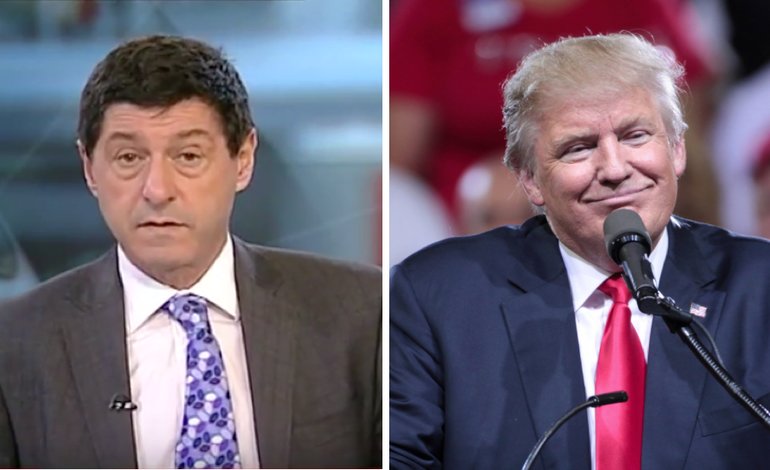 BBC North America Editor Jon Sopel has come under fire for validating a false claim made by US President Donald Trump.

Owing to widespread opposition, Trump has announced the cancellation of his state visit to the UK.

When Theresa May agreed to the visit despite public outcry, campaigners planned to protest the President’s arrival with the ‘biggest rally in UK history’. This forced May to backtrack. Trump would visit for two days next month to open the new £750m US embassy. The year-long delay and absence of “red carpet treatment” reportedly outraged Trump, who finally cancelled.

In a face-saving measure, the President claimed the move was due to former President Barack Obama’s decision to relocate the US embassy “off location”.

Reason I canceled my trip to London is that I am not a big fan of the Obama Administration having sold perhaps the best located and finest embassy in London for “peanuts,” only to build a new one in an off location for 1.2 billion dollars. Bad deal. Wanted me to cut ribbon-NO!

And Jon Sopel seemed to back up Trump’s excuse.

All true. Suspect the possibility of protests on streets of London would have also weighed in the calculation https://t.co/ckYXp8zfKm

It was the George W Bush administration that decided to move the US embassy, and chose the new site at Nine Elms. Grosvenor Square had housed the US embassy since 1938, and US links to the affluent spot go back two centuries. But security concerns meant the US relocated its embassy to an industrial estate south of the river.

This has been a long and careful process…We looked at all our options, including renovation of our current building…

In the end, we realized that the goal of a modern, secure and environmentally sustainable Embassy could best be met by constructing a new facility.

As the United Kingdom is our best friend and best ally, we wanted to be as close to parliament and government buildings as the current site and we have achieved that.

This information was widely available. And Sopel’s failure to conduct a basic factcheck was spotted quickly by journalists and public alike.

Not a good week to get stuff wrong if you’re Sopel. pic.twitter.com/j4HkS9sVO8

It also seems that the current US Ambassador to London has no such problem with the new location:

Seems @USAmbUK Woody Johnson doesn’t hate the new embassy so much – the background of his twitter profile appears to show the panoramic view from what I assume is his new office pic.twitter.com/A0eLQTdlCq

News of the cancelled visit is unlikely to do Trump much harm among his supporters. Some took to social media to express relief, wishing to avoid a public spectacle and keen for the President to focus on domestic issues.

I'm actually glad he's called it off and I'm a Trump supporter. It is a huge snub to our useless government. Besides, he has more important things to do like #MAGA. #TrumpVisit https://t.co/wNammSNBZx

But the news has delighted critics from both sides of the Atlantic, including London Mayor Sadiq Khan.

Many Londoners have made it clear that Donald Trump is not welcome here while he is pursuing such a divisive agenda. It seems he’s finally got that message. This reinforces what a mistake it was for Theresa May to rush and extend an invitation of a state visit in the first place. pic.twitter.com/lNaQGx9iBw

Fragile racist fascist Donald "Shithole Countries" Trump cancelling his visit to the UK because he thinks he won't be welcome is the BEST news in ages 💪💪💪 #Trumpvisit #TrumpNotWelcomehttps://t.co/oVWEUQeydA

The British people have successfully kept Trump away. We may apologise a lot, eat lots of fish and chips, but we will never welcome that jumped up, tango faced, bigoted idiot of a man here. 🇬🇧🇬🇧#TrumpVisit #TrumpUkVisit #stayawaytrump #chicken

This was not a good week for Donald Trump. And it was not a good week for the BBC‘s Jon Sopel. But it was far worse for Theresa May. The Prime Minister is desperate to secure a positive trade deal with the US to counter potential losses from Brexit. So she spent political capital she didn’t have to give Trump what he wanted in hopes of securing a deal. And the Prime Minister failed to secure any of it. No trade deal, no state visit, and even worse relations with both the UK public and the White House.

– Support the work of Stop Funding Hate, which campaigns for advertisers to stop funding media outlets that promote prejudice.