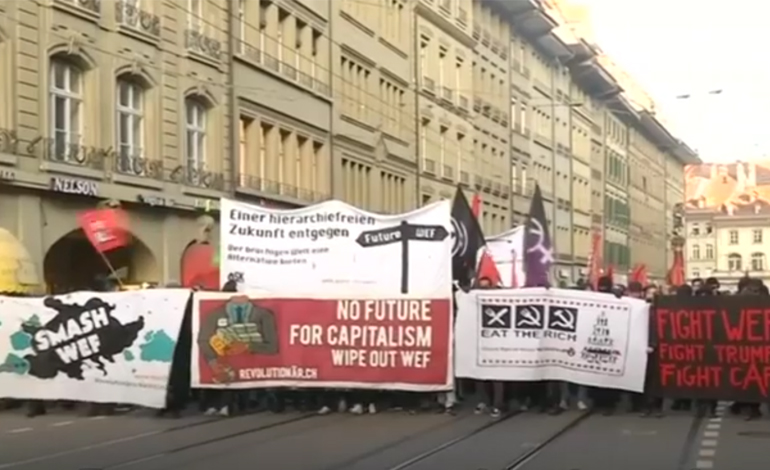 Hundreds of people marched through the Swiss capital of Bern on 13 January in protest against a visit by Donald Trump. Banners included messages such as “Fight Trump, Fight Capitalism” and “Go home D.T”. This response comes just days after the US President cancelled a visit to London.

A platform for free market economics

It was announced on 9 January that Trump will attend the 2018 World Economic Forum (WEF). The meeting will be held between 23 and 26 January in Davos, Switzerland. It will be the first time a sitting US President has attended the WEF since Bill Clinton in 2000.

Over 3,000 people are expected to attend the event including state figureheads, representatives from multinational companies, and labour organisations. The event says it “aims to rededicate leaders from all walks of life to developing a shared narrative to improve the state of the world”.

But the WEF has faced lots of criticism and opposition. It was a prime target of international anti-globalisation protests around the turn of the millennium. And demonstrations have continued, involving major conflicts between protesters and police in 2003 and 2009.

Critics view the WEF as a platform for free market capitalism, supporting companies and industry at the expense of labour conditions. The Canary previously reported that the WEF is a gathering that exacerbates “grotesque levels of poverty and inequality”. And Swiss group RJG, which helped organise the 13 January protest, says the event is “a meeting for the establishment to discuss a neoliberal agenda”.

From Switzerland to the UK

However, street opposition to the WEF had nearly disappeared in recent years. In 2016 protests were reportedly almost non-existent. But it seems Trump’s attendance could have been a key factor for the Bern protest’s turnout, which reports claim attracted between 500 and 1,000 people.

And this protest came just days after Trump cancelled a long-awaited visit to the UK. He was due to open a new US embassy building in London. Trump claims Barack Obama’s “bad deal” in selling off the previous building was behind his U-turn. But this claim has been debunked.

Instead, it’s suggested that “fears of mass protests” during his visit to London could have been a key factor in the cancellation. It is alleged that Trump explicitly raised protests as an issue with Theresa May during a phone call in June 2017.

On a Facebook page for an event opposing the embassy visit, hosted by journalist Owen Jones and the Stop Trump group, over 8,000 people said they would attend. And London Antifascists were organising their own event opposing Trump as well as Britain First. The far-right group planned a march in support of the US President’s visit.

Responses from activists in Switzerland, the UK, and elsewhere in the world show that Trump faces opposition wherever he goes. And for a man with a ‘fragile ego‘ the threat of serious protests in the streets might be enough to keep him away.

– Read more at The Canary about Donald Trump.