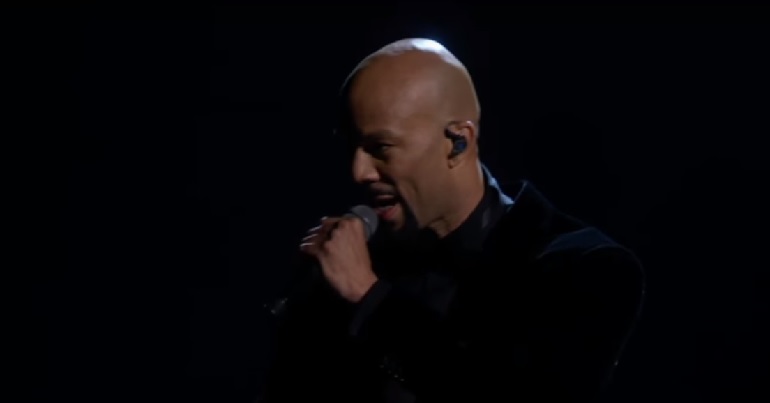 On 4 March, rapper Common took the 2018 Oscars by storm. For many people, he stole the show.

Style, soul and substance. The performance had it all.

No wonder everyone’s talking about it.

Fav performance of the night. Thank you for always speaking your truth and standing up. #Oscars

Hip-hop at its political best

Performing at the 90th Academy Awards, Common reminded the world of the political punch that music can pack – summarising the biggest fights in the US since the start of Donald Trump’s presidency.

The song Stand Up for Something is from Marshall, a film telling the story of the first African-American Supreme Court justice in the US.

Join Me + Take a Stand for What You Believe In. The People United will Never Be Defeated. #Oscars

Joined on stage by “heroes”

The performance also put a spotlight on real-life “heroes”:

Much Love to all the heroes that joined Andra Day + I on stage. pic.twitter.com/k9RIVNhMe5

Common and singer Andra Day asked the above activists to join the performance in order to highlight their inspiring work on the ground. The rapper revealed:

I thought, ‘What if we got people who really do the work?’ People who are true activists out in the world and on the front line. People whose lives, whether by circumstance, have become prime movers for change.

Many people quickly expressed their appreciation for the powerful performance:

Our liberation is bound in each other.

Thank you to @AndraDayMusic and @common for bringing the power of activism to the #Oscars. #DreamActNow #MeToo #Enough #PuertoRicoStrong pic.twitter.com/sRtXyKJrTq

“I stand for peace love and women’s rights.” – @Common

It has never been more important to stand up for something: for social and criminal and EQUAL justice, for women’s rights, for civil rights, for human rights. From Syria, to Puerto Rico, to #StandingRock. #Oscars #Oscars90

Thank you for standing up and demanding more of our leaders. #Oscars

My beloved @chefjoseandres is at the #Oscars stage while @common is doing his thing. Because folks, in life you got to stand up for something.
Puerto Rico, you are not forgotten. 🇵🇷

Indeed, viewers are unlikely to forget this performance any time soon.