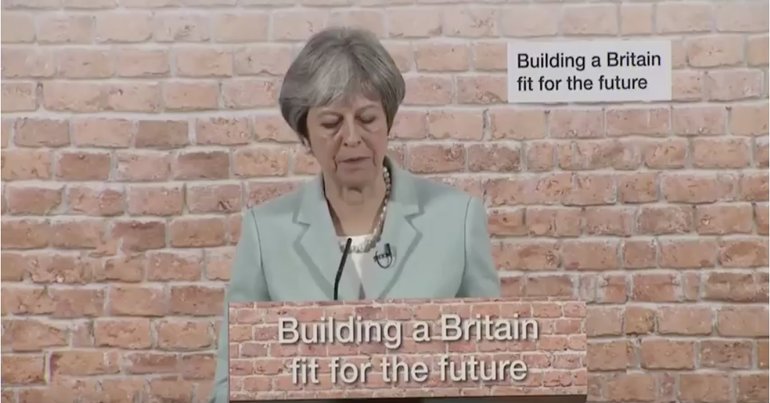 During a press conference on 5 March, Theresa May lashed out at a BBC journalist for asking a simple question about Brexit. That it was so easy to force the prime minister off script shows the scope the BBC has to help hold power to account. If only it would do its job more often.

BBC chief political correspondent Vicki Young didn’t expect to become the news today. But her simple question about Brexit triggered a newsworthy response from Theresa May. The PM was taking questions from the press after a speech on housing. Alongside her housing question, Young raised Confederation of British Industry concerns about how the UK’s financial services sector would access European markets post-Brexit. And the PM lost her cool, replying tartly:

Being the BBC, of course, you were always going to get Brexit into the question.

A polished performance it was not.

Theresa May: “Being the BBC, of course, you’re always going to get Brexit into the question.” pic.twitter.com/2MHE02vLVm

Didn’t think asking a question about #Brexit would be so controversial… pic.twitter.com/Z0N2XftyND

Oh dear. PM gets narked at being asked about Brexit . "Being the BBC there's always going to be a Brexit question….

And as viewers pointed out, this was a souring of the usual cordial relations between the BBC and the Conservative government.

Remember when the @BBC got threatened with loss of income by the Tories and then stopped being a neutral public broadcaster but instead became a state PR agency paid for by the public? I do. @BBCNews is a conspirator in a damaging hard Brexit. #Marrhttps://t.co/fpfA6nzHQC

But what the exchange did show is how easy it is to rattle the PM and disrupt her usual routine of filling air time with non-answers. If only BBC journalists would do so more frequently, or engage opposing guests capable of doing so.

In a world full of partisan media outlets (The Canary among them), there is a central role for the BBC in adjudicating the battle of ideas. But that depends upon a level of objectivity which the corporation has been failing to uphold. Despite the wailings of right-wingers about the ‘leftie BBC‘, the overwhelming weight of evidence proves otherwise. A recent study by the Media Reform Coalition concluded that the BBC has shown clear bias against Labour leader Jeremy Corbyn. But the bigger picture is even worse. A content analysis by Cardiff University found BBC coverage after the financial crisis heavily dominated by financial services figures. They concluded:

Results indicated that political and financial elites dominated coverage. The consequence was that the news reproduced a very limited range of opinion on the implications and potential strategies for deficit reduction. The view that Britain was in danger of being abandoned by its international creditors with serious economic consequences was unchallenged and repeatedly endorsed by journalists. Despite their limited record of success during recessions, austerity policies dominated discussion of possible solutions to the rise in the deficit. This research thus raises questions about impartiality and the watchdog role of public service journalism.

Speaking at a Real Media event on ‘Media bias and big political events’, the University of Glasgow’s Greg Philo explained the apparent shift to the right of BBC News coverage. He traced it back to the rise of Blairism and the invasion of Iraq. From then on, conversations in parliament were based on a near-universal acceptance of neoliberalism, in both domestic and foreign policy. And as the BBC saw its role as providing balanced reporting of those views, it failed to make space for broader discussions. As Philo explains:

The BBC, which is supposed to be public – supposed to be representing a range of views, interprets its rubric as being simply to report what goes on in parliament. So if parliament is substantially to the right, then the BBC sees no reason to report that section of the population which are on the left. Even if there is a huge number of people who want left-wing policies in some areas.

What viewers want and need from the BBC is simple. They need the BBC to do its job, and to fulfil its number one public purpose as stated in its charter; “to provide impartial news and information to help people understand and engage with the world around them”.