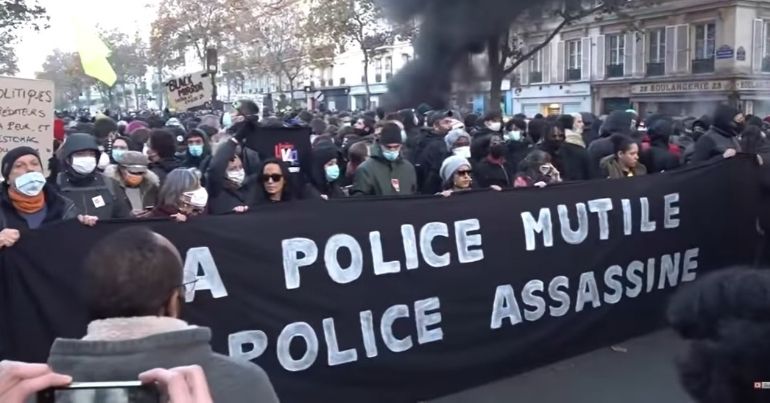 Thousands of people have gathered across France to protest against a proposed security law that would restrict the sharing of images of police officers.

Officers in Paris who were advised to behave responsibly during the demonstrations fired tear gas to disperse rowdy protesters in a largely peaceful crowd.

Dozens of rallies took place against a provision of the law that would make it a crime to publish photos or video of on-duty police officers with the intent of harming their “physical or psychological integrity”.

Civil liberties groups and journalists are concerned that the measure will hinder press freedoms and allow police brutality to go undiscovered and unpunished.

The crowd included journalists, students, left-wing activists, migrants rights groups and citizens of varied political stripes expressing anger over what they perceive as a hardening of police tactics in recent years, especially since France’s yellow vest protest movement against economic hardship in 2018.

Many protesters, police and journalists have been injured during demonstrations in recent years.

The cause has gained renewed importance in recent days after footage emerged of French police officers beating up a black man, triggering a nationwide outcry.

President Emmanuel Macron spoke out against the video images on Friday, saying “they shame us”.

Video that surfaced on Thursday showed the beating, days earlier, of music producer Michel Zecler, following footage on Tuesday of the brutal police evacuation of migrants in a Paris plaza.

The officers involved in the beating of Mr Zecler were suspended pending an internal police investigation.

An internal letter from Paris police chief Didier Lallement called on officers to use “probity, sense of honour and ethics” when policing the protests, which were authorised by authorities.

Hundreds of officers in body armour, some with truncheons, others with tear gas launchers and a few with rifles, lined the march route and side streets.

They erected tall metal gates barricading all main roads leading out of Bastille plaza at the end of the march route.

Through most of the march they hung back, chatting while holding their helmets or watching silently as protesters shouted “Shame!” at them.

The officers jumped swiftly into action after some objects were apparently thrown at them.

The crowd was overwhelmingly peaceful, but some in the unruly minority came equipped with gas masks and helmets. An Associated Press reporter heard about 10 rounds of tear gas being fired and saw some small rocks and a couple of paving stones being thrown.