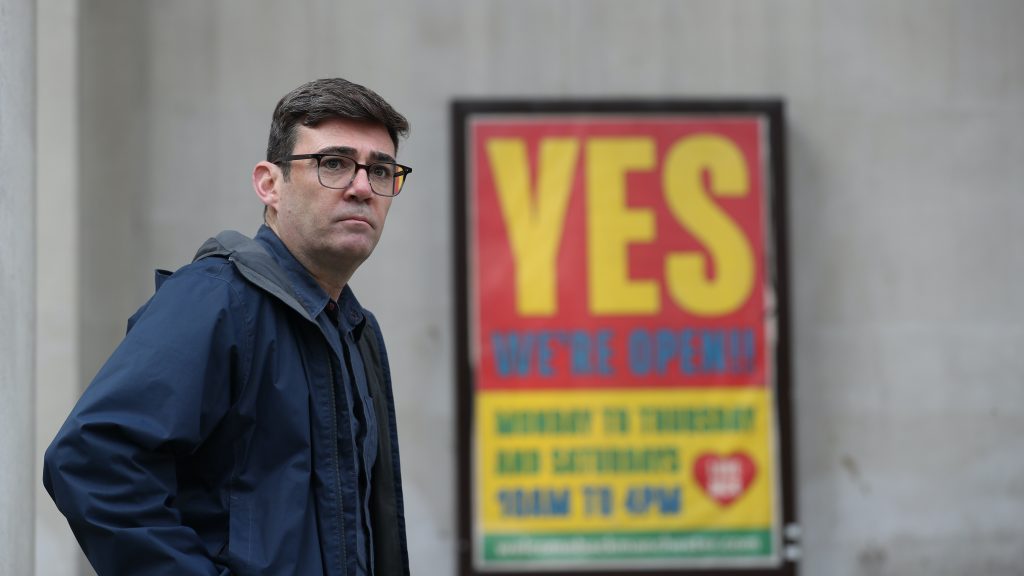 Andy Burnham, the Mayor of Greater Manchester, has written to the region’s 27 MPs calling for cross-party support to demand more money for areas in Tier 3 lockdowns and to get some restrictions lifted in two weeks’ time.

Greater Manchester’s 2.8 million residents, along with much of the rest of the North, will be under Tier 3, the highest level of restrictions when England’s national lockdown ends at midnight on 1 December. Burnham said he wants more financial support from the government for Tier 3 areas when the issue is debated in parliament on 1 December. He also said on current infection trends in Greater Manchester, the area will be in a similar position as many areas which have been placed in Tier 2.

Although the government has indicated it is unlikely to make any major changes on the first review date in a fortnight’s time, Burnham has called for a “meaningful review” to challenge the decision.

The Government is continuing a policy of imposing harsh regional lockdowns without providing sufficient support to offset the damage to jobs and businesses. This is a deliberate act of levelling down from a Government which only a year ago was elected on a promise to do precisely the opposite.

It simply cannot be right or fair that Tier 1 Cornwall and the Isle of Wight are receiving the same level of business support as cities such as Manchester, Leeds and Hull.

MPs representing Tier 3 areas on all sides of the House need to come together and demand a much fairer support package from the Government. For businesses that support hospitality, December is traditionally the most important month of the year.

To take that away without compensation will be devastating for them and many will not survive into the new year.

The government has said discretionary business grant funding will not be increased or extended after the new tier system is introduced. Grant funding was given to all local authorities at the start of national lockdown to support businesses hit hard by restrictions but not getting grant funding from elsewhere.

It's completely irresponsible for the government to leave tier 3 areas in the lurch again.

Lancashire and Greater Manchester have been under strict restrictions for weeks now and need more government support to get through this crisis. @AnnelieseDodds #NWConnected pic.twitter.com/iyFkPOp6dK

It means that places in Tier 3 will get no more of such funding than other areas going into Tier 1 or 2, the mayor said. Burnham wants areas in the highest level of restrictions to receive a monthly business support grant linked to the number of affected business in any area, rather than simply the number of residents.

While Greater Manchester’s infection rate remains above the England average, cases are now falling faster there than in any other region in England and there are signs of pressure easing on hospitals, the mayor said.

Data published on 25 November showed the GM infection rate is now the lowest it has been since the end of September, falling by 45% over the last two weeks compared to a 39% fall across the North West and a 13% fall across England.

In London, over the same period, the infection rate increased by 17%.