Will Joe Biden’s inauguration launch a new beginning for Israel and Palestine? - Canary 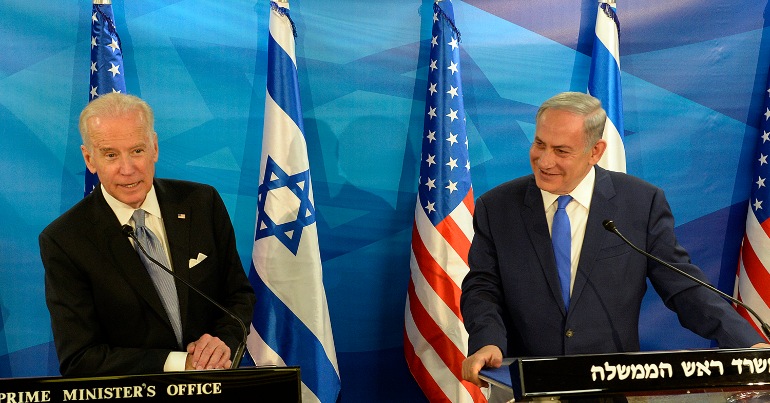 The Israeli organisation Physicians for Human Rights has issued a statement criticising the Israeli health authority for ignoring the Palestinian people’s increasingly desperate need for the coronavirus (Covid-19) vaccine.

This is yet another concern adding to the enduring litany of crippling circumstances affecting the lives of Palestinians existing under the stranglehold of Israeli occupation.

When president Biden enters his, hopefully vandalised free, Oval Office on the 20 January, will he continue on his pre-election well-trodden course that reflects his and Barack Obama’s Middle-East legacy? Having now reached the apex of his political career, he can reside in the comfort of managing the status-quo or go down in history by attempting to resolve the Israel/Palestine issue.

Biden has said he is proud to be an ‘Obama-Biden Democrat’ and given their close friendship and political alignment, Obama appointed him as vice-president. This was also due to Biden’s prolonged experience and participation in the Senate Committee on Foreign Relations which he chaired.

Their Middle-East strategy was illustrated by the appointment of their top Middle-East advisor Dennis Ross, an experienced former advisor to both Bush and Clinton and who was also a stalwart of AIPAC, the leading pressure group in the Israel lobby. It has been suggested that such was the influence of Ross on Obama that the diplomat George Mitchell resigned in protest over Ross’ support for Israel’s sovereignty over all of Jerusalem. Ross himself later resigned in support of Netanyahu over the Iran nuclear deal (he is also one of the names associated with the nomination for Biden’s US ambassador to Israel).

Obama began his presidential honeymoon period enthusiastically and optimistically by underlining the importance of applying international law to global conflicts. He followed this up in June 2009 with his ‘New Beginning’ speech in Cairo which was seen as a pivotal change from Bush’s American foreign policy edicts and was auspiciously welcomed by many states in the MENA region.

But it soon became apparent that it was a lipstick embellishment on his lip service of calling for an end to the illegal construction of Jewish settlements in the West Bank and for a just solution to the plight of the Palestinian people.

This was manifested in 2011 when Obama used his first UN Security Council veto against a resolution opposing Israeli settlements. That decision came as no surprise given that on nine previous occasions since 2000 the US used its veto in defending Israel’s actions.

Contradictions continued when the long-standing demand on the Palestinians to reject armed resistance and take the diplomatic route was upended in 2012 when the Obama/Biden administration voted against the UN General Assembly resolution which admitted the Palestine Authority (PA) to the status of a ‘non-Member Observer State’.

But perhaps the most egregious action of Obama occurred in 2014 during ‘Operation Protective Edge’ when Gaza suffered an immense military attack by Israel which destroyed much of Gaza’s infrastructure, killing over 500 Palestinian children. During this attack, the US replenished Israeli munitions enabling the continuation of the bombardment. Obama’s Nobel Peace Prize was awarded – prematurely.

The Obama/Biden school further enhanced Israel’s dominant presence in the Middle-East by rewarding it with an increase in military aid to $38bn over ten years making it, by far, the world’s biggest recipient of US military aid.

When Egypt’s first democratically elected government of Mohamed Morsi was overturned in 2013 by a military coup headed by Abdel Fattah al-Sisi, this led to violations of human rights with scores of people executed and hundreds imprisoned and tortured for their political opposition. Obama’s initial reaction was to suspend the US’s annual $1.3bn of military aid, but as political pressure mounted in supporting the regime that ended the Muslim Brotherhood leadership, military aid was resumed two years later.

This in effect was an unwritten agreement for Egypt to protect Israel’s southern border and enhance the siege of Gaza. Obama refused to acknowledge that it was a ‘coup’ as military aid payments would have been an infraction of US congressional law.

It was only at the end of his term in 2016 (for fear of a political backlash had it been done earlier) that Obama abstained in the successful UNSC resolution 2334 condemning Israeli settlements. This symbolised his falling gravitas and supine approach throughout his term of office in dealing with Netanyahu. In the 8 years of his presidency, no diplomatic protocol was created whereby any sustainable progression could be made in bringing to an end the escalating Palestinian despondency owing to the draconian occupation by Israel.

As Biden prepares to enter the White House, will the lessons learnt help lay the foundation for a new Middle-East approach for his forthcoming presidency?

While his immediate aim is to eliminate the nuclear ‘threat’ from Iran, it’s ironic that the US refuses to acknowledge the existence of Israeli WMDs but strives for a unilateral solution rather than a bilateral/multilateral approach as practised by East/West diplomacy. In the Middle East, Biden will likely prioritise the Joint Comprehensive Plan of Action (JCPOA) in maintaining Israel’s nuclear weapons hegemony.

Biden’s electoral victory was welcomed internationally including by Mahmoud Abbas, president of the Palestinian National Authority who saw it as a step forward in advancing a peaceful solution. But apart from accepting Trump’s embassy move to Jerusalem from Tel Aviv, it would appear that Biden’s support for the Palestinians is more charitable than political. He aims to reverse Trump’s abandonment of humanitarian aid to the Palestinians by recommencing funding to UNRWA, and from USAID, re-open the PLO office in Washington and espouse the platitude of aiming for a two-state solution. While many see this as a step forward, it is a step back, back to square one where he and Obama left off.

The Biden administrative appointments are indicative of the direction in which he wants to go. Despite Trump’s support for Israel, his ephemeral administrative appointments generated a fear of mercurial unpredictability for Israel as opposed to Biden’s sedentary well-established team on Capitol Hill with whom Israeli diplomats had long been associated. This includes his proposed secretary of state, Anthony Blinken who served as deputy secretary of state and deputy national security advisor in the Obama administration, and worked with Biden on the Senate Foreign Relations Committee. He is also sympathetic to Israel.

Likewise, with vice-president elect, Kamala Harris is the standard mode of many US politicians that pay homage to Israel in their address to AIPAC conferences. Here, she gave an anachronistic speech saying that Israel, “has truly made a desert bloom”.

Because of the right-wing portfolio that Trump had built up, it came with a concomitant progressive reaction and demand from within the Democratic party and a rapidly changing awareness of the American Jewish community on the Palestine narrative. Biden’s appointed team so far does not reflect this growing left-wing influence as Bernie Sanders and Elizabeth Warren were not invited into his cabinet.

In addition to the Abraham Accords, the existing peace treaties between Jordan, Egypt and Israel, the pan-Arab demand for Palestinian justice is seemingly taking a back seat effectively releasing Biden from the pressure to prioritise this in his foreign policy agenda. However, this normalisation process is increasingly belittling Israel’s relentless objection to a Palestine state for ‘security reasons’.

In 2002, Israel rejected the Saudi promoted Arab Peace Initiative base upon UN resolution 242. The normalisation between Israel and Arab states was conditional on Israel relinquishing their control of the West Bank and Gaza and creating a Palestinian state.

Now, with the expanding adherents to the Abraham Accords, the normalisation has no such demand other than a verbal objection to Netanyahu’s threat of annexation in the West Bank.

After a meeting between Mahmoud Abbas of the PA and al-Sisi in Cairo in November of last year, it was agreed to hold an international peace conference, supported by the Arab League and the Munich Group (Egypt, Jordan, France and Germany), early in 2021. Netanyahu reportedly plans to meet up with al Sisi in Cairo to discuss it.

There would only be one issue to discuss at such a conference – the two-state option. Israel will never agree to the one-state plan and, for a viable two-state solution, that will depend solely on how much ‘stick and carrot’ Biden will use in getting Israel to agree.

With the exception of Eisenhower, every other US president have been debilitated when faced with Israeli intransigence on the question of an agreed two state solution. The US has both unrivalled hard and soft power but does Biden have the will power?

But here is a fundamental reality: if the choice is one state, Israel can either be Jewish or democratic – it cannot be both…

As the Trump hordes assaulted Washington, those ideals of US democracy were being praised and defended by Biden. How much of this admired sentiment will be universally applied by him especially given his support for a state which enforces the disenfranchisement of a whole people – the Palestinians?