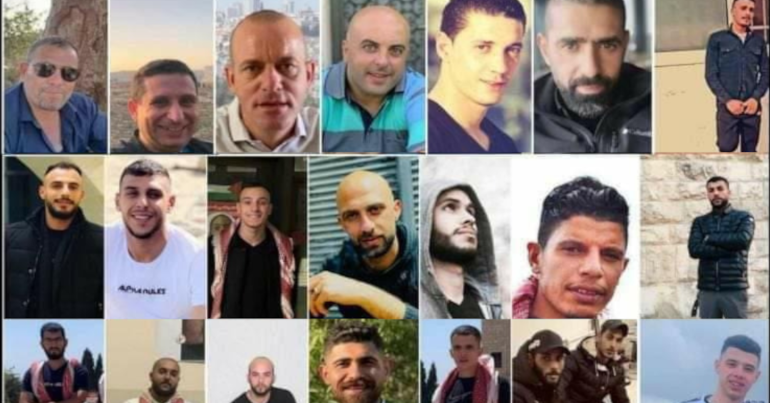 Thirty more Palestinian prisoners have joined a mass hunger strike inside Israel’s military prisons, calling for an end to imprisonment without charge.

We have shared some of the images of the hunger strikers above. To see the photographs of all of them click here.

The prisoners’ action is against Israel’s colonial ‘administrative detention’ policy, which allows people to be held indefinitely, without any evidence being made public.

This new wave of hunger strikes comes just days after the Israeli military court ruled that hunger striker Khalil Awawdeh’s period of administrative detention would be extended. Khalil had ended his 172-day hunger strike – which brought him close to the death – on the basis that he would be released at the next oppurtunity.

Statement read at the gates of a military prison

Several Palestinian prisoner solidarity organisations gathered outside Ofer military prison, close to the city of Ramallah. They read out this statement in support of the hunger strikers:

The beings of this earth deserve life, and to the enemies of humanity, we say on this land that it is worth fighting so that we can live, and in the context of our continuous struggle, we embark today on an open hunger strike. Our demand is: clean air, a sky without bars, a space of freedom, and a family gathering around the table. The demand of the occupation is to separate us from our social reality and our national and humanitarian role, and turn us into dry fragments. Between our demand and their demand, the occupying power carries out the abhorrent policy of administrative detention.

The statement goes on to give a heartbreaking message to the prisoners’ loved ones, who will suffer as a result of the strike action:

our apologies to our mothers, fathers, wives, children and loved ones for the pain that accompanies you throughout the days of the strike. We say to you: Our victory lies in your smile, and our apologies to all who will be harmed for their solidarity by the brutality and barbarism of the occupation. We extend our thanks to all the forces that are working to support us and achieve our victory.

Palestinian resistance fighter Leila Khaled has also joined the hunger strike from her home. Leila became an icon of Palestinian resistance to Israel’s occupation after taking part in several hijackings of planes in the 1970s as part of the Popular Front for the Liberation of Palestine (PFLP). She also took part in providing medical support and organising with Palestinians living in the refugee camps of Lebanon during Israel’s attacks throughout the ’70s. She gave this message to the hunger strikers:

You are on the front lines confronting this criminal fascist enemy. With your strike, you will grab your freedom and the freedom of your people. Glory to you!

One of the prisoners who has begun hunger striking is a French-Palestinian lawyer and prisoner solidarity organiser called Salah Hammouri. I met Salah in the West Bank in 2012 while carrying out research with Corporate Watch. I interviewed him about his experiences in Israeli military prisons. When I spoke to him, Salah had already spent a total of almost eight years in Israeli administrative detention.

You don’t look for justice in a military court […] The military courts are part of the occupation. In those courts you are condemned from the start.

The first time Salah was held in administrative detention was in 2001, when he was just 16. Soldiers had raided his family’s house and accused him of sticking up posters commemorating those who had died resisting the occupation. He was held with 80 other young people in Jerusalem’s Russian Compound interrogation centre. Salah told us that during his time at the compound he was forced to sit on a chair with his legs shackled and his arms tied behind him for up to 20 hours a day. His interrogators accused him of being “close” to the PFLP. He was held for nearly three weeks before he saw a lawyer.

“a kind of psychological torture”

Salah was detained again in 2004. This time soldiers came to the house where he was staying. They said that one of the other men who was staying in the house was wanted. They then arrested everybody and held all of them in administrative detention for nine months. Salah told us:

Administrative detention is a kind of psychological torture where you never know if you are going to be released at the end of each detention period. Sometimes they only tell you on the same day as the possible release if they are extending it or not. It is torture for you and for your family

In 2005, Salah was arrested yet again at an Israeli checkpoint. He was blindfolded and handcuffed, and then held for a month without charge. This time he was interrogated for 65 days before he was able to see a lawyer. He was accused of planning an attack on a right-wing politician. Salah described their interrogation tactics:

They use the idea of threats against your family to make you talk. Just before my arrest I had dropped my dad off at the hospital as he needed to have a heart operation. One day, after I had been interrogated for around a week, the Israelis came to my cell and told me to come and look through a peephole. On the other side was my dad, looking weak, being interrogated by them.

Most Palestinian prisoners from the West Bank and Gaza are imprisoned inside Israel, in breach of the Geneva conventions (which prohibit the detention of members of an occupied population outside the occupied territory). This leads to an increased sense of isolation, and makes it very hard for their families to visit them.

After our interview, I read how Salah has been arrested again multiple times, and how the Israeli state has applied to revoke his residency in Jerusalem. When I met Salah he was working as a field researcher for Addameer, a Palestinian prisoner support organisation. In 2021, the Israeli occupation forces criminalised several prisoner solidarity and human rights organisations, including Addameer, claiming that they are linked to the PFLP.

Salah was arrested without charge again in March 2022. He is currently being held in administrative detention in Ofer military prison, where he joined the hunger strike just days ago. I wish him and his comrades victory in their struggle.

Salah’s lifetime of resistance inside and outside Israeli prisons is an example of the steadfastness which keeps the Palestinian struggle alive. It is a resilience and determination that can be seen in the struggles of people resisting incarceration all over the world. That determination can be seen in the ongoing strike happening right now in Alabama’s jails, too.

We need to stand with our comrades resisting prison systems worldwide, listen to their calls for action, and learn from them. Most of all, we need to build our solidarity, and organise across borders and on both sides of prison walls for an end to the oppressive institution of incarceration.

Featured Image is of some of the faces of the hunger strikers, via Samidoun (cropped to 770x403px – with permission)

[we urge] all supporters of Palestine and the prisoners’ struggle to join the campaign to end administrative detention and to support these valiant prisoners putting their bodies and lives on the line to resist and struggle for a liberated Palestine, through their hunger strike for freedom.

Download these distributable flyers and posters to highlight the struggle to free Palestinian prisoners:

2. Build the boycott of Israel – This is a critical moment to escalate the campaign to isolate the Israeli regime at all levels, including through boycott campaigns that target the occupation’s economic exploitation of the Palestinian land, people and resources as well as those international corporations, like HP and G4S, that profit from the ongoing colonization of Palestine.