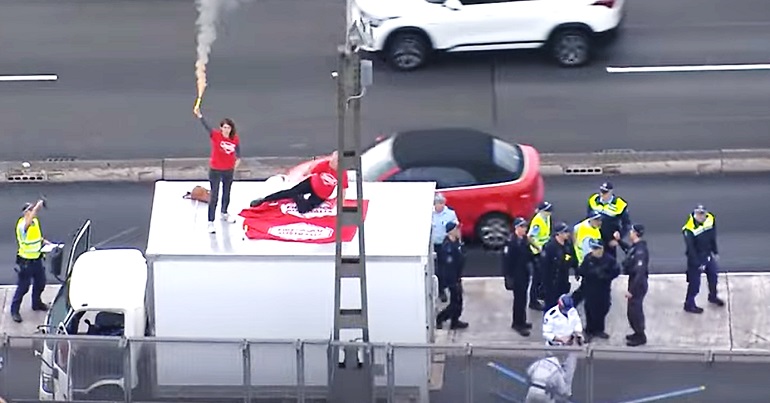 It seems it’s not just the UK state which is drifting further to the authoritarian right – authorities in Australia has just jailed a climate crisis protester for 15 months for blocking a road.

The UK: clamping down on protest

In the UK, the Police, Crime, Sentencing and Courts (PCSC) Act recently came into force. As the Canary‘s Eliza Egret previously wrote:

the act will affect our right to protest. But until we’re on the streets, we won’t know exactly what we’ll be arrested for. This is because the act is – in many sections – ambiguous, and will give police forces the freedom to interpret the law as they see fit. For example, the police will be able to impose conditions – such as when and where the protest can take place – if the noise of a protest will cause ‘serious disruption’.

Prior to the PCSC Act becoming law, the police have been partly doing this anyway. For example, police have made around 2,000 arrests of Just Stop Oil activists so far this year – many for blocking roads. This came as courts granted government agencies and transport bodies legal injunctions to restrict Just Stop Oil protests even more. Of course, this isn’t new to 2022 – with courts sending around 18 environmental activists to jail in 2021. All this has been under successive Conservative Party governments – and with the support of the opposition Labour Party.

Now, if you live in Australia, this may well ring some bells. This is because the government of an Australian state has just done similar to the UK.

As World Socialist Web Site (WSWS) reported, a New South Wales judge jailed Deanna ‘Violet’ Coco for 15 months, to serve a minimum of eight. Her crime was blocking a road during a climate crisis protest. As WSWS wrote, a judge jailed Coco because in April, in Sydney:

she parked a truck on [a] bridge and stood holding a lit flare, intended as a distress signal. This protest blocked one of the bridge’s five city-bound lanes during the morning peak for about 28 minutes, before police removed her and others.

WSWS also noted that the judge:

accused Coco of engaging in “childish stunts” that had let an “entire city suffer,” even though only one bridge lane was blocked. Moreover, the protest was clearly motivated by genuine and serious concerns over the dangerous warming of the planet’s atmosphere. For this, the magistrate told Coco she was “not a political prisoner,” but “a criminal.”

Coco was the first person to be sentenced under new laws in New South Wales. The state’s Liberal Party premier backed the judge’s decision to lock up the climate activist:

Premier Perrottet backs sentencing of Deanna “Violet” Coco. He says it is “pleasing to see” and warns others against taking part in protests that “inconvenience people”. “If protesters want to put our way of life at risk then they should have the book thrown at them.” pic.twitter.com/KlrC3Wxhi1

WSWS reported that the Labor Party also supported Coco’s incarceration. However, human rights groups and the UN have condemned the judge’s decision:

#Australia – I am alarmed at #NSW court's prison term against #ClimateProtester 𝗗𝗲𝗮𝗻𝗻𝗮 𝗖𝗼𝗰𝗼 and refusal to grant bail until a March 2023 appeal hearing. Peaceful protesters should never be criminalised or imprisoned.👇🏽 https://t.co/uvxN0f7Inl

The West: losing its shit

Much like the UK, anti-protest laws have been brewing in Australia for several years, across several states. But a judge jailing Coco marks a concerning uptick in this authoritarian crackdown. This is symptomatic of the agenda across the corporate Western world – where Germany has been arresting protesters, Holland has been jailing them, and Amnesty has accused France of unlawfully using the law against them.

Clearly, the UK state cracking down on our freedom to protest is not unusual under our capitalist system. However, it appears that authorities are upping the ante when it comes to trying to shut ordinary people up over their concerns about the state of the world.