Sky News drops a nationalisation bomb ahead of RMT strikes 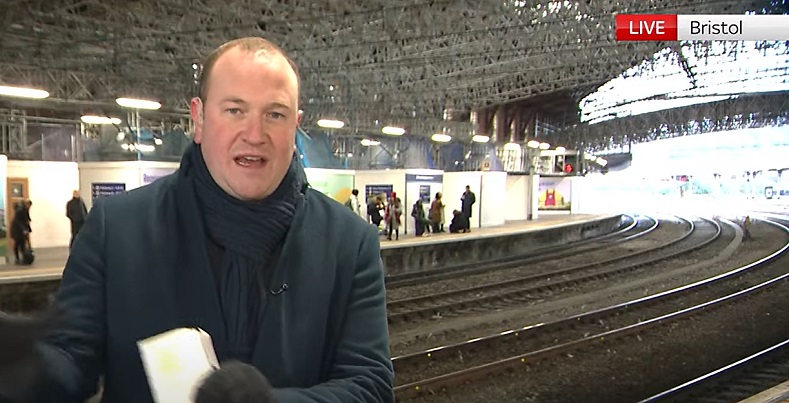 The National Union of Rail, Maritime and Transport Workers (RMT) has just announced more rail strikes. Naturally, some of the mainstream media are pushing back against the strikes. However, a Sky News reporter managed to sum up the feelings of much of the public – as he dropped a nationalisation bomb live on TV.

As the Guardian reported, the RMT has said its members will be striking:

from 6pm on Christmas Eve until 7am on 27 December, curtailing some of the last passenger trains before Christmas and potentially disrupting a wide programme of engineering works on the railway. Most trains do not run on 25 or 26 December.

This is on top of strikes which are happening on 13-14 and 16-17 December. The RMT announced the extra strikes after it rejected a pay offer by Network Rail that was well below the rate of inflation. So, cue the media to try and pit the public against workers – or rather, to divide and conquer us. For example, the Telegraph ran with the headline:

It was a similar story on Twitter. The RMT corrected rogue Telegraph hack Allison Pearson:

Public support for nationalisation and strikes

However, over on Sky News, reporter Dan Whitehead told a different story. He noted that commuters:

are not happy. Lots of them talking to me this morning, disgruntled about the strikes going on, calling for nationalisation, saying this simply can’t go on.

Reporter talking to commuters in Bristol: "They are not happy. Lots of them talking to me this morning disgruntled about the strikes going on, calling for nationalisation, saying this simply can't go on". #KayBurley pic.twitter.com/r7tZVWVdpW

It would be easy to forget amid the right-wing headlines that the public has consistently supported the nationalisation of railways. In fact, since the RMT’s industrial action, support for bringing railways back into public ownership has increased, according to YouGov:

However, it is a slightly different story when it comes to public support for striking RMT workers. In October, YouGov polling said that people were “more supportive than opposed” to rail strikes:

But by November, this had changed –  with 47% against, and 41% supporting them. So it seems that the media narratives around striking and Christmas may have swayed some people’s opinions.

It’s worth remembering that the current wave of strikes – from the RMT to the Communication Workers Union (CWU) and NHS workers – is not just about those workers. It’s about everyone who’s underpaid and undervalued having the will to rise up against their corporate capitalist bosses. The unions leading the way at present should be an example to all of us – whatever industry we work in, or even if we are non-workers.