Seven dead as protests over Castillo's ousting continue in Peru 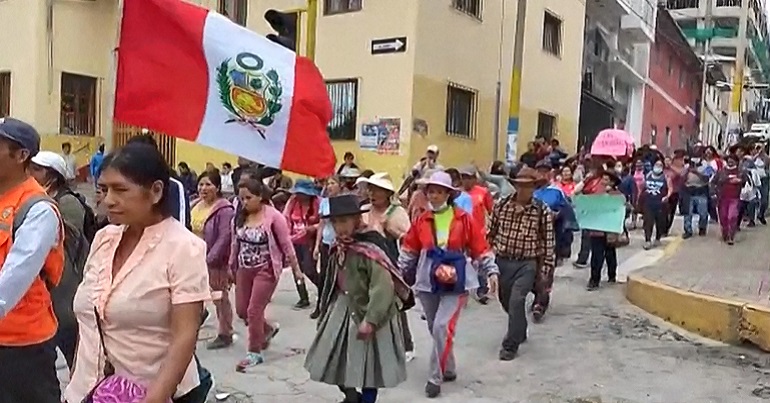 Security forces killed five more protesters in Peru on Monday 12 December, as demonstrations over the right-wing ousting of the left-wing, former president Pedro Castillo showed no sign of calming. However, working-class support for Castillo continues to rally, as unions and community groups called a general strike.

Agence France-Presse (AFP) reported that authorities have killed seven people, including three teenagers, during escalating protests since Peru’s Congress accused Castillo of an attempted coup, then impeached and arrested him last week. New President Dina Boluarte tried to ease tensions on Sunday, announcing she would seek to hold elections two years early and declaring a state of emergency in flashpoint areas. However, that had little effect – protesters continued to demand her resignation, blocking roads in several cities around the country with logs, rocks and burning tires. As the Guardian reported:

The demonstrators accuse Boluarte – Castillo’s former vice-president who was sworn in just hours after he was ousted – of betraying the former leader and usurping the presidency.

AFP reported that some 2,000 protesters smashed runway lighting, burned security booths, and forced the closure of the airport in Peru’s second-largest city Arequipa for several hours on Monday before police dispersed them with tear gas. In Apurimac, demonstrators torched the public prosecutor’s office and a police station. Meanwhile, in Arequipa, protesters occupied one of the largest factories in the country, owned by the dairy company Gloria.

Then, around 100 Castillo supporters camped out in front of the police facility in Lima where he is being held, demanding he be released and returned to office. Protester Ana Karina Ramos told AFP:

allow people to exercise their rights to peaceful assembly and freedom of opinion and expression.

The Guardian reported that:

Amnesty International is calling on Peruvian authorities to avoid using excessive force in their response to the protests. “State repression against protesters is only deepening the crisis in Peru,” said the group’s Americas director Erika Guevara-Rosas.

Castillo has been in detention since last Wednesday, and is facing charges of rebellion and conspiracy after he dissolved Congress and vowed to rule by decree. Castillo was not the first to do this to Congress, with former president Martín Vizcarra doing so in 2019 – with the right-wing also attempting to remove him. Now, Castillo has met with his lawyers in Lima ahead of a hearing in which he will seek his immediate release. Meanwhile, the leftist governments of Mexico, Argentina, Colombia and Bolivia released a joint statement in support of Castillo, saying he had been “the victim of antidemocratic harassment” since his election.

The left-wing former president’s 17-month rule was overshadowed by six investigations against him and his family, mass protests demanding his removal, and a power struggle with the opposition-controlled Congress. However, as Mint Press News reported, many see his ousting as a coup by the right-wing-led congress:

Peru’s far-right Congress started the campaign to depose Pedro Castillo as soon as he came to power in 2021. They had tried twice before they succeeded on December 7.

Castillo had the constitutional right to dissolve Congress. It had been done by the right-wing before. pic.twitter.com/UyQkl0OoXB

Others on social media accused the US of backing the coup:

An undemocratic coup in Peru, backed by the US. Not a word from the British government's new 'anti-authoritarian' foreign secretary, or Labour's either.

And some said it was a “class struggle”:

The class struggle manifests itself on the streets and highlands of Peru, the dimensions of poverty and indigeneity on open display. The fight for @PedroCastilloTe is a fight for sovereignty, dignity, and peace, the keywords of our times. pic.twitter.com/YMYYXz3UgI

With his background as a rural teacher and union leader, and with few contacts among the nation’s elites, Castillo has always drawn his strongest support from Andean regions, while struggling to find backing in coastal Lima. Rural unions and organisations representing Indigenous peoples have called for an “indefinite strike” beginning Tuesday 13 December in support of Castillo, himself the son of a peasant family. They demanded the suspension of Congress, early elections, and a new constitution, as well as Castillo’s immediate release, according to a statement from the Agrarian and Rural Front of Peru, which groups about a dozen organizations.