Europe's 2022 wildfires made more carbon than an entire country 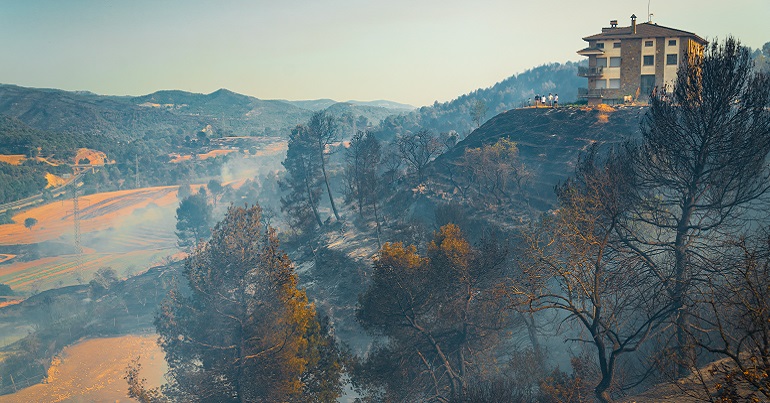 Wildfires that scorched across Europe this year burned a record land area and stoked carbon emissions. That’s according to an update released on Tuesday 13 December by Europe’s forest fire and satellite monitors.

The summer of 2022 was the hottest in Europe’s recorded history. The continent suffered blistering heatwaves and the worst drought in centuries – as climate change drives ever longer and stronger hot spells. That created tinderbox forests, increasing the risk of devastating, and sometimes deadly, wildfires. The Copernicus Atmosphere Monitoring Service (CAMS) said:

The length and intensity of the heatwaves to hit Europe during the summer, combined with the general dry conditions on the continent during 2022, contributed to record-breaking wildfire activity.

CAMS noted the European Forest Fire Information System (EFFIS) put the total cumulative burnt area in the 27-nation EU from the start of the year to mid-November at over 785,000 hectares (1.9m acres). That is more than double the average of just over 317,000 hectares in the 2006-2021 period. CAMS estimated total wildfire emissions from the EU and the United Kingdom from 1 June to 31 August at 6.4 megatonnes (64m tonnes) of carbon, the highest level for these months since the summer of 2007. That’s more than the entire country of Greece produces in a year.

Europe: bucking the global trend – and not in a good way

Importantly, CAMS noted that the global trend is a decline in emissions from wildfires because of a reduction in savanna fires in tropical regions. However, it also said some parts of the world are seeing emissions rise:

We also continue to identify and monitor significantly increased fire emissions in different parts of the world, where hotter and drier conditions are leading to increased flammability of the vegetation.

Huge fires that raged across Spain and France meant that these countries saw the highest carbon emissions from June to August since the satellite monitor’s records began in 2003. CAMS stated that this “had a major impact on air quality in the region”.

EFFIS has said that 2022 is likely to have seen the highest number of fires recorded in Europe since 2006. In its report on the 2021 wildfires, the organisation also included data on the 2022 burned area. EFFIS said:

Wildfires raging from west to east and across northern, central and southern European countries offer clear evidence of the effects of climate change.

EFFIS said it would be necessary to prepare populations to:

live with wildfires, as they become more frequent and intense because of climate change.

In September, the United Nations’ World Meteorological Organization said the interaction between pollution and climate change would impact hundreds of millions of people over the coming century, and urged action to rein in the harm. As 2022 showed, so far Western nations are not heeding the warning.