Starmer: still no SNP deal if there's a hung parliament in 2024 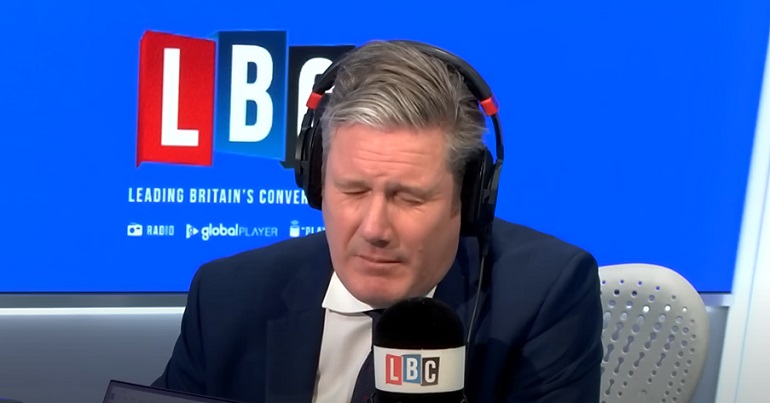 Labour leader and certified yoon Keir Starmer has once again confirmed his party would not do a deal with the Scottish National Party (SNP) if there was a hung parliament at the next general election. Even a right-wing LBC hack pointed out that it meant Starmer would rather see the Tories’ “limp on” in government.

As Holyrood reported last year, at the Labour Party conference Starmer said of a possible coalition government or deal with the SNP:

No deal under any circumstances.

The context to this is that the SNP hold the majority of Scottish parliamentary seats in Westminster. Meanwhile, whilst Labour currently lead in the opinion polls, there is a chance that the Tories could eat into this. As Chris Hopkins from pollster Sevanta told HuffPost:

Sevanta’s most recent polling gave Labour a majority of 314 – leaving the Tories with just 69 seats. However, that’s a big prediction and a long-way off. So, you’d hope Starmer would be putting the good of the public first and making sure we knew all options were on the table to prevent the Tories regaining power in 2024. But no – that’s clearly too much to ask.

A caller to LBC asked Starmer during an interview with Nick Ferrari if he’d changed his mind on a possible SNP deal if needed. Starmer said again:

We are not doing a deal with the SNP. I say that in capitals, I say it in bold, I said it at my party conference…

you’d rather see, somehow, the Conservatives limp-on in some extraordinary hotchpotch deal than you borrowing five-to-ten seats from the SNP and getting over the line?

In short, Starmer said yes – spouting some unionist garbage about being ‘better together’:

Unsurprisingly, people on social media were unimpressed by Starmer’s comments:

Red Tory stating he'd rather keep the Blue Tories in power is not news.
It's the Blairites all over again.
Red Tories have already thrown millions of us under the bus when they worked with the rest of the Establishment to block Corbyn, a caring & fair socialist getting into gov.

Show me you're a tory without actually telling me yer a tory #bewarethewolfinsheepsclothing https://t.co/vxsk245mL4

Now, to be moderately fair on Starmer, former Labour leader Jeremy Corbyn also ruled out a deal with the SNP at the 2019 general election – albeit in slightly less forthright terms. However, he seemed more open to ‘indy ref 2’ than Starmer does. So, while it looks like Labour could win the next general election, nothing is set in stone. And for Starmer to already be actively denying the people of Scotland autonomy – as well as saying he’d prefer to throw all of us under the bus than work with the SNP – is nothing short of petulant and arrogant.