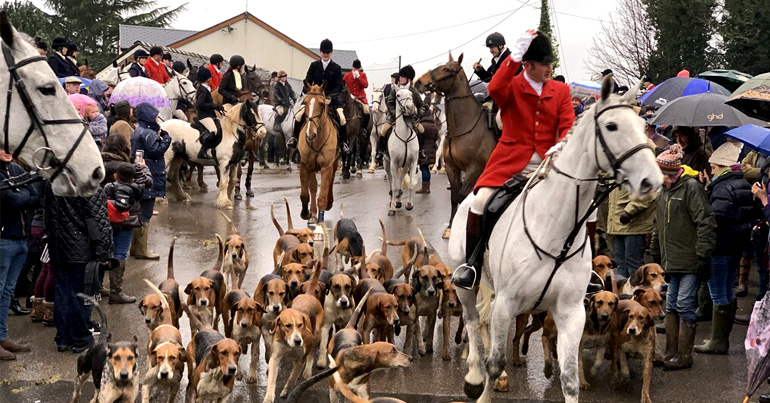 The Christmas period means many things to many people, but for some of Britain’s wildlife it is a time of terror. Foxes, hares and deer across the country face the grim prospect of being chased and killed during the hunting industry’s biggest day of the year. But there are also protesters across the country trying to stop this Boxing Day hunting horror from going ahead.

The Christmas period is rife with high days for the hunting industry, with Christmas Eve and New Year’s Day traditionally being seen as important days in its calendar. However, no day is bigger or more notorious than Boxing Day. With its roots in the inability of aristocrats to spend time with their families, Boxing Day sees hunts take to the streets of towns across the UK to parade their hounds, horses, and humans, before heading into the fields to hunt wildlife.

They haven’t gone unopposed, though. Protesters and hunt saboteurs (‘sabs’) have confronted Boxing Day hunts for decades. The first sabotage attributed to the Hunt Saboteurs Association (HSA) was on Boxing Day 1963. And today, the movement targeting Boxing Day in particular is stronger than ever.

Sabbing a Boxing Day meet looks much like sabbing any other hunt – albeit with a greater number of hunt supporters to obstruct and attack sabs. However, 26 December is a galvanising moment for other types of anti-hunt protesters.

A number of events are already advertised on Facebook for this year, including protests against the following:

These protests will take to the street to remind hunts that plenty of people are disgusted by their activities. Tensions have run high in past years, though, with some instances of physical confrontation. Fighting broke out between pro- and anti-hunt individuals during the Avon Vale hunt’s parade on Boxing Day 2021, for example.

Ban from Bungay on Boxing Day

One Boxing Day protest this year has garnered more attention than usual. Action Against Animal Cruelty – East Anglia launched a petition asking Bungay Town Council in Suffolk to “Ban the Waveney Harriers Hunt Parade from Bungay on Boxing Day”. It received more than 40,000 signatures and led to a debate by the council, though this essentially led to its handwashing of the issue.

The group told the Canary that it was determined to stop the Waveney Harriers’ parade because:

trail hunting is a smokescreen and the hunts around the country actively chase and kill wildlife!

Its efforts mirror successful campaigns elsewhere in the UK. Cheshire West and Chester Council banned hunting from council-owned land in December 2021, for example. There was also a wave of hunting bans by local councils throughout 2018 and 2019.

Action Against Animal Cruelty – East Anglia told the Canary that:

There has been a rise in evidence [of criminal hunting] through video footage gained by sabs and monitors, and it feels like the time has come to push for enforcement of a total ban on hunting with hounds. Getting the Waveney Harriers kicked out of Bungay is just one part of this.

Boxing Day is an opportunity for hunts to veil their activities by pretending they are a quaint ‘biscuit tin’ pastime. Protests and campaigns to stop Boxing Day parades are essential in combating these lies.

While the Hunting Act 2004 banned hunting with hounds, sabs and others that oppose hunting have persistently highlighted how little has changed in the field. The hunting industry repeatedly claims to ‘trail hunt’, i.e., to follow an artificially laid scent. However, this claim has been exposed as lies not only by the weekly efforts of sabs and hunt monitors, but by the carelessness of hunts themselves.

Mark Hankinson, former head of the Masters of Foxhounds Association, which oversaw nearly all foxhound packs in the UK, was convicted of encouraging illegal hunting in October 2021. The verdict came after the HSA published covertly recorded footage from a webinar of senior figures within the hunting industry. In December 2022, huntsman Ollie Finnegan pleaded guilty to illegal hunting while heading up the Quorn Hunt, one of the country’s biggest and most prestigious hunts. Police found messages on Finnegan’s phone that indicated a “pattern of offending over time”. These are just two of countless instances that reveal the hunting industry as an organised criminal network.