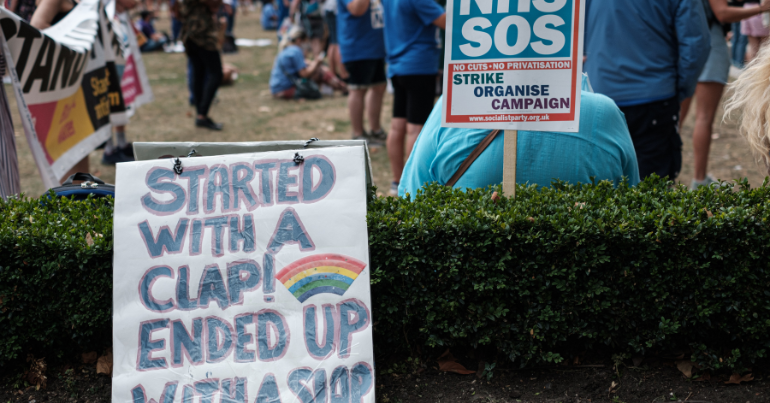 Tory minister Nadhim Zahawi has stated that by not accepting an effective reduction in pay, British nurses are only aiding Russia’s war against Ukraine. Zahawi said:

Energy use by Putin means we have had very high inflation rates and we’ve got to try and bring down inflation…We have to come together, this is not a time to be divided, [but] to, I hope, send a very clear message to Mr Putin that he can’t use energy as a weapon in this way and we will remain united.

He’s making the play of linking disquiet at home (the threat of strike action in the UK) to an aggressor abroad (Vladimir Putin). His argument, however, is complete nonsense – industrial action in Britain is a tradition that stretches back decades.

Nurses in England, Wales and Northern Ireland are due to go on strike on 15 and 20 December. LBC journalist James O’Brien wasn’t having any of Zahawi’s comments. O’Brien said:

If that’s not an example of utter intellectual and moral bankruptcy, I don’t know, frankly, what is.

'He's a man who put the heating bill for his stables on expenses.'

Labour’s John McDonnell pointed out that Zahawi is a multi-millionaire, whose expenses claim to heat his stables was more than a nurse’s starting pay:

To put in context multi millionaire Nadhim Zahawi threatening nurses & ambulance paramedics with bringing in soldiers to break their strike, it’s worth remembering his expenses claim which included heating his horses’ stables was more than a nurse on starting pay is asking for.

Similarly, satirical news website Newsthump published a ‘response’ from Putin, and skewered the remarks from Zahawi (a minister without portfolio):

Nadhim Zahawi’s controversial statement, that NHS staff should accept a drop in living standards to defy Putin, was validated by the Kremlin after it explained how the key obstacle to Russia’s winter offensive was a midwife in Poole forced to take out a payday loan to fix her boiler.

Colonel Semyon Vilyamov, a spokesperson for the FSB, admitted that the chair of the UK Conservative Party had accurately highlighted how the personal finances of British medical staff was the driving factor in all Russian military planning.

He went on, ”Your minister without a job is correct. Should English nurses and paramedics refuse to accept an effective 6% pay cut, then we are confident that we can seize Kyiv within a fortnight.

Zahawi threatens to replace nurses with the army

It is the right and responsible thing to do to have contingency plans in place…We are looking at the military, we are looking at a specialist response force which we have actually set up a number of years ago.

Around 2,000 civil servants and military personnel are being readied to provide support, should strikes by nurses proceed. It’s reported that they include:

up to 600 armed forces personnel and 700 staff from the Government’s specialist Surge and Rapid Response Team, as well as other parts of the Civil Service.

The Tories are evidently trying whatever they can to break up the strikes. In fact, in June, then-chancellor Kwasi Kwarteng announced how the law had been changed to allow temporary workers to strike-break:

According to Rail, Maritime and Transport Union’s (RMT) Mick Lynch, the Tories are intent on making:

effective trade unionism illegal in Britain and to rob working people of a key democratic right. If these proposals become law, there will be the biggest resistance mounted by the entire trade union movement, rivalling the General Strike of 1926, the Suffragettes and Chartism.

Lynch’s prediction of a general strike is in line with the views of others. As the Canary previously published, what we are now witnessing, says Communications Workers Union (CWU) head Dave Ward, is a de facto general strike.

Strike Map has tweeted a calendar of known strikes for December:

📧Subscribe to get strikes of the week to your mailbox: https://t.co/CsX70x1v1G#strikemap pic.twitter.com/3ry4EHB0Ft

Strike Map has also provided an interactive map, giving the locations of strikes across the UK.

The other general strike

In the summer of 1842, riots occurred across much of Northwest England. These coincided with strikes, commonly known as the ‘Plug Plot’ as strikers sabotaged mill boilers by removing their plugs.

In July 1842, walkouts by workers took place in Preston, Blackburn, Burnley, Chorley, Bacup, Todmorden, Oldham, Wigan, St Helens, and Bolton, as well as by weavers in Stalybridge. During the following month, the strikers were joined by workers in Hyde, Denton, Dukinfield, and Ashton-under-Lyne. Similar walkouts took place in Tintwistle, Glossop, Stockport, Congleton, Macclesfield, and the Potteries (Stoke-on-Trent).

Regarding events at the Potteries, a detailed eyewitness account survives. According to a biography by Charles Shaw, on 14 August 1842 Chartist orator Thomas Cooper spoke at a rally in the Potteries town of Hanley. Between 8,000 and 10,000 gathered. This followed weeks of strikes by local miners, many of whom were starving.

The next day, Cooper spoke again at Hanley. But after he finished speaking, the crowd headed for the local police office to release prisoners before ransacking a court. A second meeting was held in Longton, another Potteries town, where looting took place. A clergyman’s home was attacked and set on fire. There were arrests after the military intervened. Back in Hanley, another clergyman’s home was attacked, along with the home of a local lawyer and a magistrate.

On 16 August, thousands converged on the Potteries town of Burslem. However, this time they were met by dragoons. After the Riot Act was proclaimed, the demonstrators were brutally attacked. But something unexpected happened: weavers from the nearby towns of Leek, Macclesfield, and Congleton, together with farm workers, rose up to join with their Potteries comrades.

The dragoons opened fire. Several demonstrators at this ‘Potteries Peterloo‘ were hit. One young man, shoemaker Josiah Heapy from Leek, was killed.

But that’s not the end of what happened.

Historian Katrina Navickas explained how the strikes in Stalybridge and Hanley served as triggers:

for a much larger and political form of collective action. Overall, thirty-two counties were hit with strikes, with the turnouts most extensive in the industrial districts of Lancashire, Cheshire, Staffordshire, the West Riding, Cumberland and Lanarkshire. Two elements of the agitation distinguished it from previous turnouts and the previous ‘national holiday’ of 1839. First, this was a strike constantly on the move: it was spread by large bodies of strikers (a precursor to flying pickets) moving from one town to the next, turning out mills, factories and mines en route by pulling out the plugs from the steam engine boilers.

She went on to explain that:

the impetus originated from the unions in a syndicalist-type form of organisation aimed firstly against their employers, but then aimed more widely at forcing the government to concede to the Charter.

In Stalybridge a plaque commemorates Britain’s “First General Strike”, involving nearly half a million workers. At its height, the strikes covered an area which stretched from Dundee and the Scottish coalfields to South Wales and Cornwall. That General Strike was organised through word of mouth, via what these days we call flying pickets.

Currently, we may be witnessing a general strike of similar form and without recourse to approval by a single body – in this case the TUC.

As for Zahawi’s clumsy attempt to link nurses’ demands for improved pay and shorter hours with events abroad, that clearly backfired. That’s because what Zahawi said was nonsense. It also demonstrated his complete ignorance of the centuries old British tradition of workers’ solidarity. But we cannot expect anything more from a Tory.