Shelter striking workers given a boost by Jeremy Corbyn 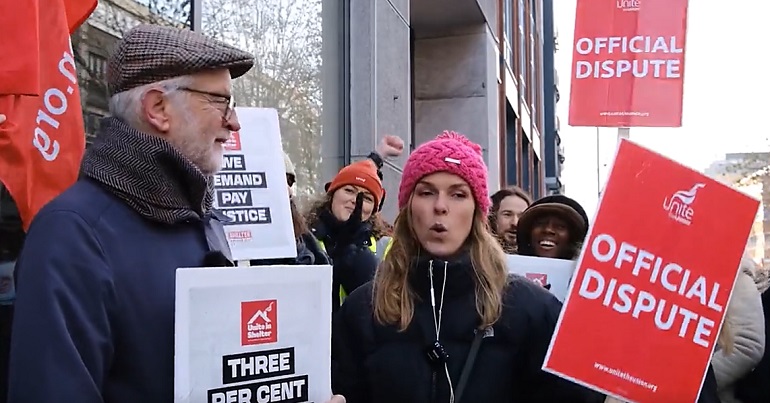 Former Labour leader Jeremy Corbyn was out on a Shelter picket line on Wednesday 14 December – and he highlighted just why the charity’s staff are striking.

As Agence France-Presse (AFP) reported, Shelter staff have been on strike since Monday 5 December. More than 600 workers at the housing and homeless charity are taking industrial action. The strike by Shelter staff, to last until December 16, will affect the charity’s offices in London and around the UK. Unite the Union describes the situation as “a bitter dispute over pay”. Unite said Shelter’s management had imposed a 3% pay rise, which it claimed “has left many of its own staff being unable to pay their rent” and stuck with the possibility of being made homeless themselves. As the Canary reported, inflation is still running at over 10% – so Shelter’s 3% pay offer is effectively a pay cut. One of the staff striking, who wished to remain anonymous, told AFP:

At the very base level… those working for a housing charity shouldn’t be experiencing housing insecurity as a result of being unable to pay rent.

Another Shelter employee who is a single parent said they had been forced to use an overdraft on their bank account and ration energy use to curb rising bills:

I get stressed when the kids’ school wants me to pay for another school trip. The best acknowledgement my employer can give me for all my hard work is decent pay.

Now, Corbyn has come out in support of Shelter workers.

Corbyn: ‘you will win’

On 14 December, the former Labour leader joined a picket line and shared a quick, one-minute video on social media. He spoke to Bronya, who works for Shelter. She said:

We’ve found that our staff are facing the threat of homelessness, too, because we’re not being paid fairly. So, we’re here on the picket line demanding fair pay for our staff so they don’t have to face the things that we’re there to help people with.

As usual, Corbyn was unflappable about workers’ striking. He said of the action:

Charity workers who help the homeless are facing homelessness themselves.

In striking for fairer pay, @UniteAtShelter members are fighting to save the very future of the essential service they provide. Solidarity. pic.twitter.com/ihGFOSqYdf

unforgivable that workers at Shelter find themselves actually being haunted by the prospect of being made homeless.

Shelter has sufficient reserves to pay its hardworking and dedicated staff a decent pay rise but it has chosen not to.

Our members at Shelter will receive Unite’s complete and unyielding support in their fight for a better deal.

Home is a human right. It’s our foundation and it’s where we thrive. Yet, every day millions of people are being devastated by the housing emergency.

We exist to defend the right to a safe home. Because home is everything.

It is perverse that a charity claiming to have this as a mantra is leaving its own workers in housing insecurity. Enough is enough – Shelter needs to fix this, and fast.