New developments may prove a game-changer for Julian Assange - Canary 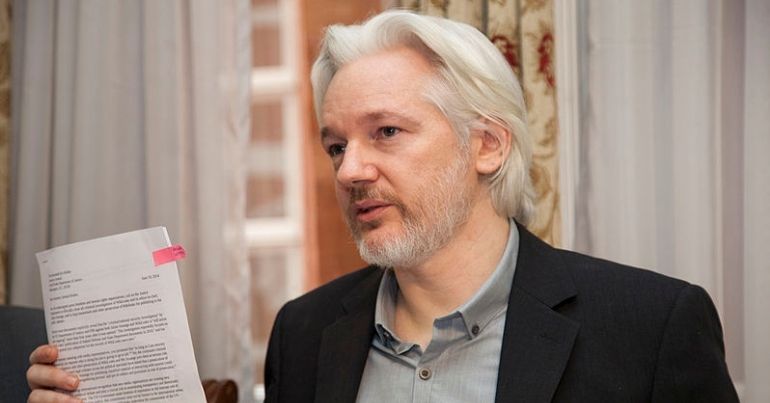 Recent revelations have possibly thrown a huge spanner into the prosecution of publisher Julian Assange. Arguably, the entire case now appears prejudiced against him. The revelations involve a celebrated whistleblower, a leaks publisher, and several major newspapers.

Cryptome is a website that specialises in the publication of leaks in the form of raw data. It explains:

Cryptome welcomes documents for publication that are prohibited by governments worldwide, in particular material on freedom of expression, privacy, cryptology, dual-use technologies, national security, intelligence, and secret governance — open, secret and classified documents — but not limited to those.

On 29 November, Cryptome founder John Young offered to be a co-defendant with Assange:

I respectfully request that the Department of Justice add me as a co-defendant in the prosecution of Mr. Assange under the Espionage Act.

In a message sent via web form to the US Department of Justice (DoJ), Young identified leaked documents – known as US cables – published by Cryptome. He stated they were the same ones leaked by Chelsea Manning. Young, who is a US citizen, included the URL for the leaked documents in his communication. He also copied in a senior judge.

Young had previously testified at Assange’s extradition hearings. Crucially, he stated that he’d published the documents before WikiLeaks.

Moreover, another witness at the UK extradition hearings was Christopher Butler of the Wayback Machine, a US-based archive. He testified that the archive still makes available to this day all of WikiLeaks’ publications.

US urged to end prosecution

Young published the unredacted US government files on the Cryptome website on 1 September 2011. Another site, PirateBay, published those files before Cryptome.

Earlier, on 28 November 2010, some of WikiLeaks‘ many media partners – El Pais, Der Spiegel, the New York Times, Le Monde and the Guardian – published a redacted selection of those files. No charges have ever been raised against those newspapers, or Young, or Piratebay.

On 28 November 2022, the editors and publishers of those partner newspapers named above published an open letter. They requested that all charges raised against Assange be dropped.

In 1971, Daniel Ellsberg was responsible for leaking the top-secret History of U.S. Decision-making in Vietnam 1945-68 (which became known as the ‘Pentagon Papers’). He leaked copies to the New York Times and the Washington Post. The 7,000-page document provided an insight into top-secret US decision-making in the Vietnam War. Ellsberg declared that the publication of the papers showed the war had:

been started and continued by the US Government in the knowledge that it could not be won, and that President Johnson and his administration had lied to Congress and to the public in relation to its origins, costs and prospects

Ellsberg was subsequently prosecuted, but the trial was halted. This followed revelations that burglars sent by president Richard Nixon broke into Ellsberg’s psychiatrist’s office. They were hoping to find evidence to discredit Ellsberg. Moreover, Nixon also organised the illegal wiretapping of Ellsberg.

Like Young, Ellsberg has also now come forward to urge the US government to indict him on espionage charges alongside Assange:

To @POTUS and @TheJusticeDept: Stop the extradition of Assange. I am as indictable as he is on the exact same charges. I will plead "not guilty" on grounds of your blatantly unconstitutional use of the Espionage Act. Let's take this to the Supreme Court. https://t.co/odm2gd6Ci1

On 5 December, Ellsberg told the BBC that Assange gave him copies of all the files leaked by Manning as a “back up”. He also stated that the US Espionage Act, if applied against whistleblowers, is unconstitutional:

EXCLUSIVE: “Let me tell you a secret… I had possession of the all the Chelsea Manning information before it came out in the press” – Pentagon Papers whistleblower

Daniel Ellsberg says he was given leaked US diplomatic cables “as a backup” by WikiLeaks founder Julian Assange pic.twitter.com/qQbjtzwkgK

A longer version of that interview is available here.

The espionage-related charges against Assange include 17 counts for receiving and disclosure of national defense documents. He’s also charged with one count of conspiracy to commit computer intrusion (hacking).

None of the WikiLeaks media partners, nor John Young, nor Daniel Ellsberg, have been indicted for their part in all this. That suggests the prosecution is prejudiced against Assange.

On their grounds, the prosecution’s case looks increasingly shaky. It should be clear to anyone with a sense of justice that the charges against Assange must be dropped without further delay.