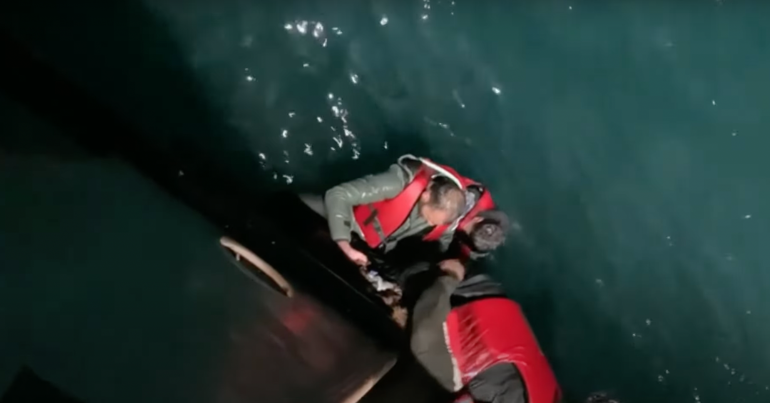 Four people died when a small boat packed with migrants capsized in the Channel overnight, reported Agence France-Presse (AFP). Dozens of other people were rescued from the waters of one of the world’s busiest shipping lanes by UK and French emergency services.

The Public and Commercial Services (PCS) union, which counts Border Force and Coastguard staff involved in the rescue as members, said Suella Braverman “should resign in disgrace”. Paul O’Connor of the PCS explained:

Suella Braverman says her heartfelt thoughts are with all those involved. Those words ring utterly hollow when she has spent her time as home secretary vilifying and demonising the very people she now feigns sympathy with. She should resign in disgrace.

Braverman is the current Home Secretary. As the Canary’s Sophia Purdy-Moore reported, has shown a relish for deportations:

Braverman proudly told Tory Party Conference attendees that it is her ‘dream‘ and ‘obsession’ to see a flight traffic asylum seekers to offshore detention sites in Rwanda.

The charity Refugee Action said the deaths were “predictable and avoidable”. Meanwhile, the Care4Calais group called the UK’s failure to make safe routes available “utterly shameful”. Government sources said earlier that 43 people were rescued, including more than 30 who had fallen overboard, with fears the death toll will rise.

A fisherman told Sky News he was awoken by his crew reporting screams for help from migrants in the near-freezing water next to their trawler. The crew spent several hours helping dozens of people to safety, sharing footage with the UK broadcaster. One fisherman said:

Adrenaline kicks in and you find the strength to get these guys safe.

Nikolai Posner, from the Utopia 56 group helping migrants in Northern France, said it received a voice message and location notification from a boat in distress at 2:53 am local time (01:53 GMT). Posner told AFP:

The location that was sent to us was in French waters. At 2:59 am the person who contacted us was no longer receiving messages on WhatsApp.

Although it is impossible to state with certainty that the messages came from the sunken boat, all the elements… tend to suggest they did.

The message suspected to have been made from the stricken boat said children and families were onboard and it was taking on water from the stern, submerging its occupants. “Please help us,” it said. “We’re in the water.”

These deaths have piled political pressure on the UK government, which promised to “take back control” of immigration after its Brexit departure from the European Union. Opponents have criticised the government’s attempts to tighten entry rules, and called its proposals to deport failed asylum seekers to Rwanda unlawful. They have also accused ministers, including Braverman, of demonising asylum seekers and fuelling hostility towards people seeking sanctuary with inflammatory rhetoric.

There are no words to express our horror and grief at today’s tragedy. A full year on from 32 people losing their lives in the Channel, our Government has done nothing to prevent further deaths and so has failed both the refugees who need our help and our country.

Last year, in November, most of the 34 people on a dinghy in the Channel died.

Moseley blamed the government for their inaction:

Both then and now, these deaths are wholly unnecessary and preventable. By failing to act, our government has blood on their hands.

Let’s be clear, today’s tragedy and those on previous days are predictable and inevitable, and caused by hostile Government policies – such as those announced yesterday by the Prime Minister – which are designed to keep people out, and not keep people safe.