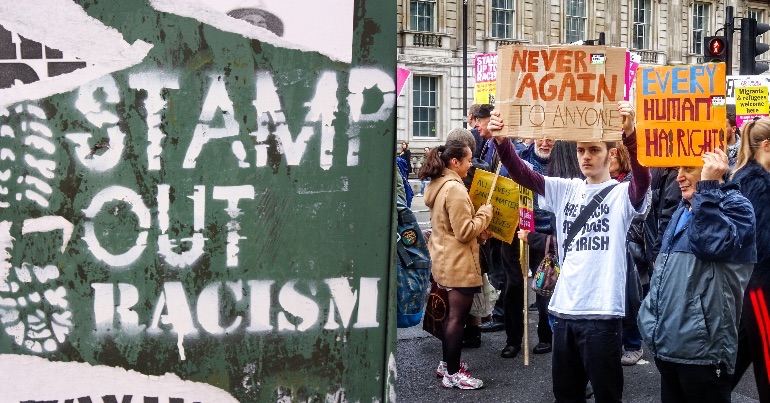 According to a new report, 4 in 10 English and Scottish people still “hold racist beliefs” – for example, that some ethnic groups are “naturally more hard working than others”. That’s one of the headline findings of a new study into racism in England and Scotland.

New research from #ReframingRace shows both a bedrock of deeply racist thinking among the public and language that campaigners can use to rally people around serious anti-racism. https://t.co/iaQxRa0ezh

Telling Black and Brown people what they already know?

A study in 2014 found that 30% of people said they were “very” or “a little” race prejudiced. In a more recent study, 84% of Black and Brown people said they still think racism exists in the UK, and “very or somewhat” so. What this new research looked into is whether people’s minds can be changed from holding racist beliefs. Research organisation Reframing Race, which conducted the study, described it as the “largest, most comprehensive study of its kind”. It conducted its research in two waves. Reframing Race said in a press release that:

The baseline findings of this research… collected by leading research agency Savanta, relate to a control group of 1,000 people and reveal widespread racist beliefs and assumptions.

Meanwhile, other sample groups (which together add up to a participant list of 19,990 people) were shown various different messages before answering the same questions, which has allowed us to understand what type of language and information can move audiences towards a more anti-racist position.

The Paul Hamlyn Foundation and think tank the Joseph Rowntree Foundation funded the research. Overall, Reframing Race’s findings were mixed. Some findings showed that racism is still prevalent. For example:

Reframing Race noted how this:

However, the report claims that when it showed participants facts about how racism is institutionalised and systemic, some people’s views changed.

The report’s authors took a positive approach towards their findings. Report author and director of Reframing Race Sanjiv Lingayah said:

If we want to end racism and entrench anti-racism it is critical to build public demand for deep and irreversible progress. Testing Times shows there is still a way to go. The data shows significant attachment to deep-seated and debunked myths about ‘race’.

More positively, the findings show that the public can understand systemic racism and that they can be rallied around far-reaching anti-racist solutions that will help to make it possible for all people to live well.

As this report highlights, the public’s understanding of race and racism is complicated and inconsistent. Many people hold contradictory positions – for example believing in racial hierarchies while simultaneously supporting action to tackle racial inequality.

In a period of heightened polarisation, finding ways to overcome these contradictions and build support for anti-racism is increasingly important. This research provides much-needed tools to understand and shape the public conversation on race and racism and we are proud to support it.

Nina Kelly, co-author and director of content and communications at Reframing Race, said:

To see these statistics, which reveal that so many among us make deeply racist assumptions, is meaningful beyond the potentially racist behaviours of a few.

Racism is fundamentally about structures and institutions, but those structures are made by design, and those institutions are run by people. So, what people think and believe matters, and has a real-world impact on how our society is organised.

The good news – and there is plenty – is that we have some strong indications of how we might speak to people and bring more of them with us.

Kelly has also recently spoken about the intricacies of how to successfully convey a message of anti-racism that proves effective:

Great insight into how words impact the effects of anti-racism work.

It's hard to think objectively when you work on something that affects you. And sometimes thinking objectively involves masking the truth.