As heroic nurses go out on strike, one hospital trust promises scabs a 50% pay enhancement - Canary 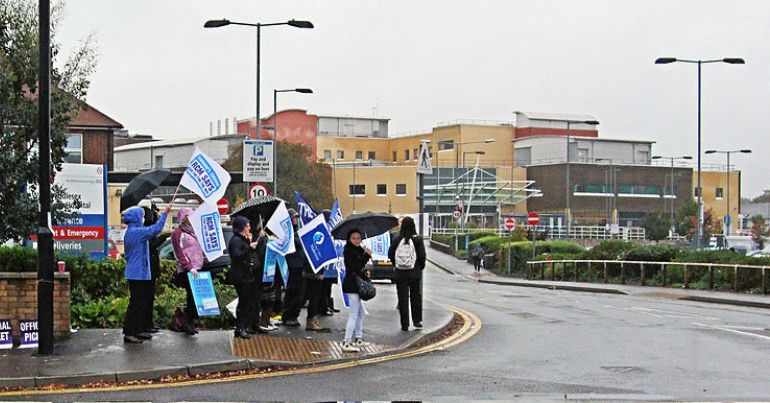 Up and down the country, nurses are striking for fair conditions. The very future of the NHS is at stake. The Royal College of Nurses (RCN), one of several unions which organises healthcare workers, is saying it is the biggest strike in their history. It is also being reported that it is the first mass strike of nurses in a century.

Yet wherever workers organise and strike, there are always those who side with the bosses over their colleagues. The Canary has seen a text message that a striking nurse in the West Country received from her local trust. The text shows that this hospital trust has gone so far as to offer a 50% pay enhancement for ‘bank’ nurses to cover the day shift for the strike. In effect, this is a substantial scab bonus for working on 15 December: 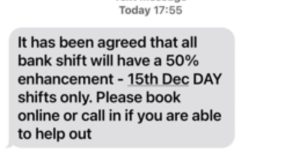 Exact budgets available for scab labour are hard to pin down. But, the 50% bonus does beg a question. If they can afford to offer huge payouts like this, why aren’t they paying nurses properly in the first place?

For many of us, this is our first time striking and our emotions are really mixed. The NHS is in crisis, the nursing profession can’t take any more, our loved ones are already suffering.

It is not unreasonable to demand better. This is not something that can wait. We are committed to our patients and always will be.

Speaking from a picket herself, Cullen said people should come and visit the strikers:

.@patcullen9’s message to the govt

“Get out of your warm offices and come down to the picket lines to feel the energy of these passionate, brilliant nurses.” #NursesStrike #RCNStrike #FairPayforNursing pic.twitter.com/MdPvCUPuHZ

I'm so used to feeling demoralised, it's so good to feel this hope. We've been battered, but we're far from broken #NursesStrike pic.twitter.com/dya7GhEqZA

In Northampton, nurses braved the coldest strike some of them had ever experienced to fight for better conditions:

proud of my @rcnnorthampton colleagues, in one of the coldest mornings I have known they were stood out in the cold, well done to the @NHFTNHS Deputy CEO David Maher for visiting the picket line this morning and Director Chris Oakes , Unite stand with our comrades #NursesStrike pic.twitter.com/x3C1Xo70Mm

In South Wales, as elsewhere, drivers beeped their support to the strikers as they passed the pickets:

Lots of cars beeping in support of the #NursesStrike here outside of The University Hospital of Wales as members of the @RCNWales strike today pic.twitter.com/1ctPZGZQG9

Similar scenes played out across the North of England, to cheers from appreciative nurses:

Solidarity to striking nurses across the North today. Like all health workers, nurses have been overworked and underpaid for far too long.

Now they're fighting back. PBP fully support you – and going by the beeps, so do the public! 💪#NHSStrike pic.twitter.com/3iqOYgqgKO

And in Liverpool, it was the same story as motorists tooted their support:

Huge support from drivers going past the @theRCN picket line where these nurses are out on strike today at the Royal Liverpool Hospital @LBC | @LBCNews pic.twitter.com/igGDrpy7kQ

The nurses aren’t just fighting for pay and conditions. They’re fighting for a functioning healthcare service for us all. One which can look after us from the cradle to the grave, as it was meant to do before Labour and Tory governments hollowed it out with privatisation.

Their fight is our fight. So if you can, get out and show your appreciation to those on the frontline.

Featured image via Wikimedia Commons/Jim Linwood, cropped to 770 x 403, licenced under CC BY 2.0.