Morocco's support for Palestine is a watershed World Cup moment 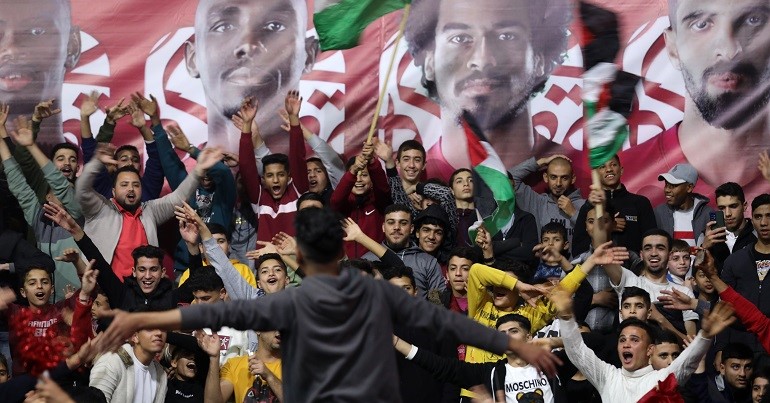 Morocco’s support for the Palestinians during the team’s historic World Cup run shows the cause has not been “buried”, says Palestinian Football Association chief Jibril Rajoub. This comes as the side face France in the semi-finals. However, while Palestinian solidarity has blossomed during the World Cup, it’s not as straightforward as that.

Morocco: taking out the colonisers, one by one

The Moroccan football team made history by becoming the first African nation to qualify for the World Cup semi-finals. They beat Portugal 1-0, having already dispatched Spain. As the Canary‘s Maryam Jameela previously wrote:

It’s not lost on many that in beating Spain and Portugal, Morocco have defeated two of their former colonisers.

Now, Morocco faces another one of its colonisers – France – in the semi-final on Wednesday 14 December. However, what the Moroccan team and its fans have also highlighted so well is a very modern-day form of colonialism: the Palestinian struggle against apartheid Israel.

As Agence France-Presse (AFP) reported, like several other Arab nations, Morocco has agreed full diplomatic ties with Israel. This was under deals brokered by then-US president Donald Trump, and also saw the United Arab Emirates and Bahrain do similar. But this has not stopped its players and fans from making clear their loyalties regarding the decades-old occupation. As Jameela wrote for the Canary‘s weekly subscriber email, the Lowdown:

The sight of the Palestinian flag has been almost ever-present at this World Cup, and it’s a pointed reminder about what happens when world events don’t just take place in the West.

Fans of all stripes (even England ones, would you believe) have been refusing to speak to Israeli news channels, and instead chanting “Free Palestine!” The Palestinian flag has been waved in the stands by fans, and held aloft by a number of teams after the match.

Meanwhile, as AFP reported, Palestinians in the Israeli-occupied West Bank, Gaza and annexed east Jerusalem have – like much of the Middle East – embraced Morocco.

Embracing Morocco – but not without caveats

In Ramallah, Palestine sporting goods store owner Saeed al-Ramahi said enthusiasm for the Moroccan team seemed unquenchable, with all of their jerseys sold out. He told AFP:

Rajoub, the Palestinian top football official, said the reactions at the World Cup proves the enduring support for the Palestinian cause, regardless of any decisions made by Arab leaders. He told AFP:

The World Cup reveals the lie that the Palestinian cause has been buried by the recent normalisation agreements.

Palestinians condemned those normalisation deals as “a stab in the back”. They also view it as a betrayal of the decades-old Arab League position against recognising Israel until it agrees to the establishment of a Palestinian state with its capital in east Jerusalem.

Arab states secured diplomatic gains through Trump’s agreements. In Morocco’s case, that included the Trump administration recognising Rabat’s sovereignty over the disputed territory of Western Sahara – Rabat is the capital city of Morocco. This came in defiance of the international community’s long-standing call for a referendum to decide its status. As Jameela previously wrote for the Canary:

Rajoub described the World Cup and the pro-Palestinian support witnessed there as “a slap in the face to the idea of normalisation”. He told AFP the Palestinians were the “33rd team” to qualify for the tournament.

Meanwhile, the Palestinian Center for Policy and Survey Research said in a study released on Tuesday 13 December that:

the World Cup in Qatar helps restore Palestinian public trust in the Arab world after years of disappointment.

The vast majority of the Palestinians say they have now regained much, or some, of the lost confidence in the Arab peoples in light of the solidarity with Palestine expressed by the fans during the football games.

Of course, the Israeli state is not happy.

Israel is home to hundreds of thousands of Jews of Moroccan descent. Some in the country have celebrated the side’s stunning performances. However, leading Israeli media outlets have claimed that the World Cup has made clear where Arab sympathies lie. The Maariv newspaper said in a commentary on Sunday.

The Moroccan festivities at the World Cup have proven that the Arab world is far from normalisation with Israel.

As Israeli viewers, we will continue to watch until the final whistle, while witnessing the bitter truth that the Arab fans have put before our eyes.

the real winner of the World Cup on social media is Palestine.

No more scarcity of support

As Jameela concluded for the Lowdown:

As Israeli forces continue to kill Palestinians, and while the media blackout on these stories persists, this support is heartening to see. Often, if you believe the mainstream media, it appears as though both institutional and individual support for Palestinians is scarce. However, the rare occasion of an Arab country hosting a major world event has provided a platform that allows people to show their love, support, and solidarity for Palestine.

Now, this support needs to transform into something meaningful and long-lasting from Arab nations and their rulers – not just in the footballing world.