Morocco's success in the World Cup is a complex situation 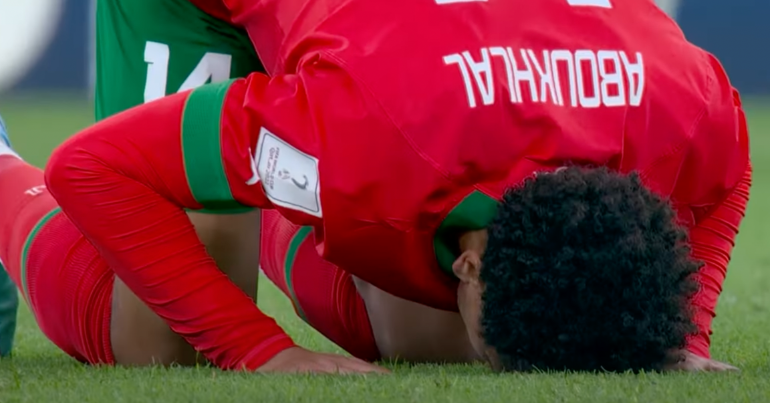 Last week, the Moroccan football team made history by becoming the first African nation to qualify for the World Cup semi-finals. They beat Portugal 1-0, having already dispatched of Spain. It’s not lost on many that in beating Spain and Portugal, Morocco have defeated two of their former colonisers. As The New Arab reported:

Morocco have already defeated two of their former European rulers, Spain and Portugal, in this World Cup. Now they gear up for a semi-final showdown with their third ex-occupier – France.

People took to the streets around the world to celebrate Morocco’s progress. There were celebrations in New York City:

MOROCCAN FANS IN QUEENS NYC. Incredible footage of all that is beautiful about the World Cup. The way it helps diasporas connect to their home countries and celebrate the wonder of their cultures. Football is amazing. 🇲🇦🇲🇦🇲🇦 pic.twitter.com/DM3kvN8ab4

And also in London:

And in many other places, including Beirut, Berlin, Paris, and, of course, in Morocco:

A prominent feature of Morocco’s time in the World Cup has been their players’ and fans’ unwavering support for Palestine. After the victory over Spain, the team posed with the Palestinian flag:

And after beating Portugal, the team did the same thing again:

Never to disappoint, the Moroccan team once again raises the Palestinian flag after their victory over Portugal. This World Cup has become a referendum on the normalisation facade. The most watched event in the world with Palestine being thrusted into the spotlight👏🇲🇦🇵🇸❤️ pic.twitter.com/CgPq2DWhHe

Celebrations in different Palestinian cities for the victory of Morroco and it’s advancement to World Cup semi finals.

Expressions of solidarity from the Moroccan team and fans have been mirrored by a reciprocal outpouring of love and solidarity in Palestine. Often, if you believe the mainstream media, it appears as though both institutional and individual support for Palestinians is scarce. However, the rare occasion of an Arab country hosting a major world event has provided a platform that allows people to show their love, support, and solidarity for Palestine.

Amongst the celebrations, however, some social media users have been making the important point that coloniality (the ongoing condition of colonialism) is rarely a singular path. Whilst Morocco is making short work of European colonisers, writer Shailja Patel noted the country’s control over Western Sahara:

Today's an excellent day for everyone celebrating Morocco's win over Spain to add Western Sahara and the Sahrawi people to your Palestine solidarity. As the great June Jordan taught us: "Freedom is indivisible or it is not freedom."https://t.co/hdfww1Hbbk

The Moroccan team’s success has inspired solidarity amongst many Arab states and others in the diaspora. However, there still needs to be space to consider how colonialism is not only the refuge of Europeans. Others brought up Morocco’s control over Western Sahara too:

It’s hard for me to rejoice seeing this while Morocco is occupying and oppressing another people.

I have zero doubt about these players’s genuine solidarity with Palestine, but I feel uneasy celebrating it and not thinking of the struggle of Sahrawi people. https://t.co/IryLtJmCZf

Some people also shared their experiences of anti-Blackness in Morocco:

Having said that I’m happy you are all happy and it IS incredible that the first Muslim Arab/African team made it to the finals. I just wanted to acknowledge and put my own discomfort out there

This discomfort and the calls to acknowledge Morocco’s colonial control of people in Western Sahara are perfectly placed. Whilst it’s heartening to see solidarity amongst Muslim nations, Palestinians, South Asians, Africans, and Arabs, these situations can’t be viewed in isolation. Solidarity can be a stifling call for those who are left out; as per the quote from June Jordan to which Patel referred, which reads in full:

Anti-Blackness is a universal reality of the modern world and it must be brought forward in every conversation. There are intersections between Arab solidarity, brown communities coming together, the anti-Blackness at the heart of Morocco’s control over Western Sahara, and Morocco’s own relationship with colourism. Just as it feels like a loving act of community to support Morocco, it is also a loving act of community to see who is left out in moments of joy and celebration. There is, and indeed there must be, room for both.