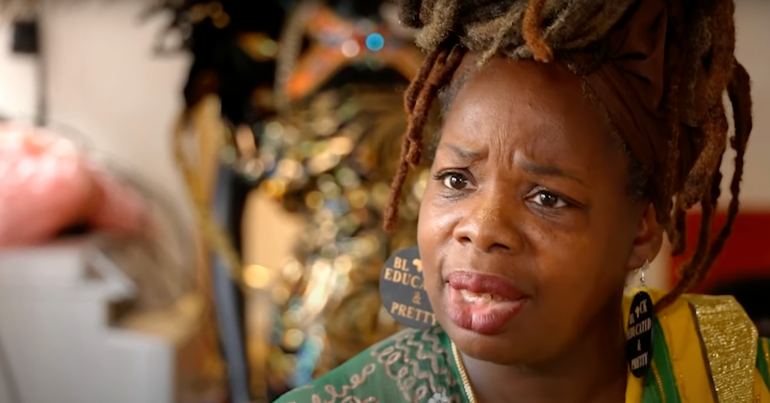 Sistah Space, the UK charity at the centre of a royal racism row, says it has suspended its work of supporting Black domestic abuse survivors. The charity has faced a torrent of toxic racist hate, forcing it to shut temporarily, reported Agence France-Presse (AFP). Founder Ngozi Fulani said in a statement that the charity had been “forced to temporarily cease” many of its operations to protect clients and staff. Fulani added:

We are overwhelmed by the amount of support and encouragement and look forward to fully reinstating our services as soon as safely possible.

Susan Hussey, a godmother to prince William, repeatedly asked Fulani where she was “really” from at a Buckingham Palace reception on 29 November. Fulani, who is British, has been targeted by what she called “horrific” racist insults online since revealing the exchange.

Hussey resigned from her role as a palace courtier after the row. However, as the Canary’s Joe Glenton reported at the time:

That she has stepped down is something. However, racism will continue to run through the heart of the British establishment – it is, after all, built on colonialism and exploitation.

The reaction on social media was, understandably, one of sorrow and rage. Actress and public speaker Kelechi Okafor said:

We are seeing the racism in REAL TIME.

This is the cuntry you’re proud of??

Where instead of taking Ngozi’s experience as a chance to learn how to better communicate with racially minoritised people, you choose bullying and gaslighting.

It will never be well with you.

Okafor also pointed out that business as usual for Britain is to deny racism at any cost:

In a few weeks something else will happen and you dizzy pricks will have the audacity to run endless news cycles about “does Britain have a racism problem?”

Journalist Lorraine King shared concern that without Sistah Space, people may well be in danger:

This is horrific but not surprising given the disgusting abuse Ngozi Fulani has had to endure.
No doubt her abusers are proud of themselves and I hope and pray that a tragedy doesn't occur because @Sistah_Space has been forced to pause their work 🙏🏾https://t.co/oJC8FUSo6a

Sistah Space is a non-profit that fills a gap in the domestic abuse sector by specifically providing services for African-heritage women and girls. Comedian Ava Vidal pushed back against racists claiming Sistah Space’s work is too specific:

When a woman is a victim of domestic violence there are often tell tale signs that the police are trained to look out for. One of these things is bruising or injuries. Often these don’t show up on Black skin in the same way. It’s very hard to see especially if you’re dark skinned

As Sistah Space explained on its own site:

Black skin complexions vary across an extremely wide spectrum and because of that, not all Black people’s skin will bruise the same as their white counterparts.

The organisation says that:

Risk assessment questions should reflect the cultural environment of black women to better understand the danger they are facing.

And, importantly, it states that:

Distrust of police officers and government agencies within the Black community due to historic institutional racism that must be recognised and addressed.

Sistah Space’s work is vital for its service users. The fact that the organisation has to close due to racist harassment is a disgrace. Even more so, it’s coming near to Christmas – a period where domestic abuse charities record spikes in domestic abuse reports.

BLMUK stands in solidarity with Ngozi Fulani, founder of the domestic abuse charity #SistahSpace, who has been subject to an onslaught of harassment after experiencing a racist incident at #BuckinghamPalace. pic.twitter.com/GEPe6MZ2pm

As did Sisters Uncut:

We stand with #NgoziFulani who has been facing vile racist abuse after bravely speaking out about being racially abused at a monarchy event 😠 It is disgusting & unacceptable. Please continue to support Ngozi & her org @Sistah_Space which does vital work in our communities! 💜💜 https://t.co/cK9SN4bMNt

Solidarity with domestic abuse org @sistah_space and founder #NgoziFulani who’s being bullied and harassed after being subject to racism in Buckingham palace. Call this out, donate and share the org’s work. https://t.co/pwtbf5zust

You can find out more about Sistah Space’s work here and donate to their work here.

It speaks to what a racist cesspit this country is that, after being the one to suffer racist abuse, Fulani is forced to temporarily close her charity to protect its staff and service users. Once again, Black women in Britain are being failed by an institutionally racist and anti-Black society.