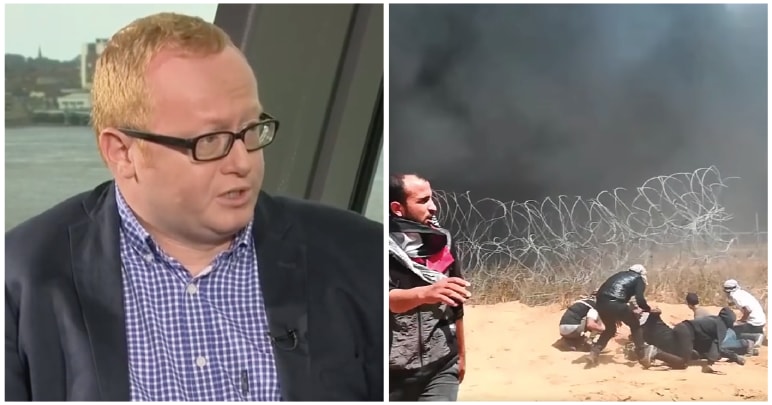 Luke Akehurst is a former member of Labour’s National Executive Committee (NEC), and a “proud” supporter of the 2003 invasion of Iraq. Although not Jewish himself, Akehurst is the director of We Believe in Israel (WBI). The group describes him as having been “a committed Zionist all his life”. And it’s in this role that he’s spoken out about the recent massacre of Palestinians by Israeli troops.

Writing at Jewish News Online, Akehurst speaks about having “access to… the smartest analysis in the business.” He also says the early reports:

made me sceptical they would shoot anyone who didn’t present a threat. The whole point of deploying snipers is that their fire is precisely targeted and the opposite of indiscriminate.

This certainly sounds logical, but it’s at odds with Israel’s record. Especially as a recent video showed an Israeli sniper celebrating after they shot an unarmed Palestinian. At the time, the Israeli defence minister said the sniper “deserves a medal”.

Akehurst goes on to state that “50 of the 60 dead were Hamas members”. This information came from a Hamas official, who stated:

This does not authorize the Israeli army to slaughter them. Did anyone of them carry a weapon or endanger a soldier?

The figure is also at odds with an earlier report from Israeli security forces which claimed at least 24 were activists – a lower figure that doesn’t suggest ‘precise targeting’.

Akehurst draws attention to comments from Hamas co-founder Mahmoud al-Zahar, which were given before the massacre:

Hamas is not the only group in Palestine, however. Fatah is its opposing party, and al-Zahar said of them in the same interview:

As for (Fatah’s) ‘peaceful resistance,’ it consists of rallies, demonstrations, protests, pleas and requests in order to improve the terms of the negotiations, or to enable talks with the Israeli enemy. This deception does not fool the Palestinian public.

Hamas had played a key role in planning the recent protests since Trump controversially announced plans to open a US embassy in Jerusalem. The events were also commemorating the 70th anniversary of the ‘Nakba’ (when “tens of thousands” of Palestinians “were expelled from their homes in 1948”).

This wasn’t the indiscriminate massacre of civilians presented to the world on Monday. This was a case of highly trained IDF soldiers, with very clear rules of engagement

But even if Israeli forces had identified its victims as Hamas activists, that doesn’t mean the shooting was legal. Prominent Israeli human rights lawyer Michael Sfard said [paywall]:

The state and army argue that the use of potentially lethal force against unarmed civilians is permitted even in circumstances where they do not impose an imminent danger to the lives of others.

It seems to me that the huge number of casualties we have seen in recent weeks is a direct result of this legal thesis, which is completely baseless. It contradicts the most fundamental principles of laws governing the use of force, which adhere to the formula that endangering the lives of civilians can only be done to defend life – and nothing else.

Sfard, and other human rights organisations, believe the Israeli army’s rules of engagement violate international law. These rules are currently classified, but Sfard and others are pushing to change that.

In short, it’s unclear if Israel followed its own rules of engagement – because those rules are unknown. But what is clear is that it has been accused of breaking international law, and it’s facing a possible UN investigation.

It also looks like Akehurst, an apologist for the illegal and disastrous invasion of Iraq, is now practising another type of apologism – one that involves defending a regime widely condemned for massacring protesters.