No wonder Leave.EU chiefs were grinning after Commons select committee 'interrogation' - The Canary 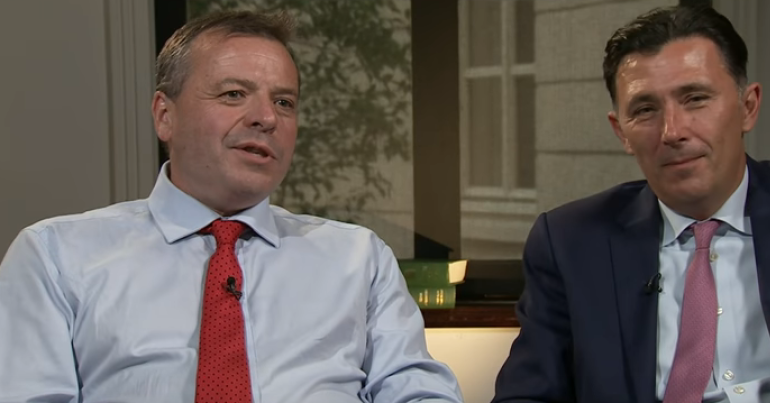 On Tuesday 12 June, Leave.EU financier Arron Banks and communications director Andy Wigmore were questioned for nearly five hours by the Digital, Culture, Media and Sport (DCMS) committee examining fake news. But the double act ran circles around their out-of-depth interrogators. It was a masterclass in evasion, and by the end the duo simply walked out of the session. No wonder they seemed so pleased with themselves afterwards.

To avoid getting the wrong answers, it helps to ask the right questions. But the committee didn’t come anywhere near close to doing that during the questioning.

Here is a video of the session.

Over the weekend before the interrogation, an article in the Observer by Carol Cadwalladr and Peter Jukes referred to multiple meetings Banks had with Russian officials prior to the 2016 EU referendum. According to documents seen by the Observer, on 18 November 2015 Banks and Wigmore met with the Russian ambassador to discuss goldmines. The meeting was reportedly arranged by diplomat Alexander Udod, who was later expelled from the UK after the poisoning of Sergei and Yulia Skripal.

The Sunday Times claimed that Banks also followed up that meeting with another in February 2016 when he met with Russian officials to discuss [paywall] “six Russian goldmines in Siberia” owned by Russian magnate Siman Povarenkin. It seems Banks was introduced to Povarenkin by the Russian ambassador. Povarenkin is chairman of gold and copper mining firm GeoProMining. Russian state-owned bank Sberbank owns 31% of GeoProMining’s shares. Somerset Capital Management, the firm co-founded by arch-Brexiteer and Tory MP Jacob Rees-Mogg, invests millions of pounds in EU-sanctioned Sberbank.

Banks told the select committee that the gold-mining deal was merely “a proposal” and “doesn’t mean there’s any wrongdoing”; also, that businessman Peter Hambro and former army chief Field Marshal Lord Guthrie advised him to “be circumspect” about the offer. Banks added “I have no business in Russia, I have done no business deals in Russia”. Hambro, known as “Goldfinger”, co-founded goldmining company Peter Hambro Mining, later renamed Petropavlovsk Plc.

In an ITV interview (in which Banks and Wigmore seemed very pleased with themselves), there was a similar denial to the claim that Kremlin finance had been in the offing:

But three weeks after the EU referendum, Banks tweeted: “I’m buying gold at the moment and big mining stocks”:

Here's @arron_banks tweeting 24 days after the EU referendum on his recent gold & mining purchases. Were they Russian? Was it the deal that the Russian ambassador introduced him to? Questions, questions… pic.twitter.com/b70gopRyVc

So the relevant question here is, what exactly did these purchases relate to?

But the failure by the DCMS committee to ask the right questions of Banks and Wigmore is not that much different from questions asked by Leave.EU and UKIP critics generally. Here are just three examples.

Did UKIP have anything to do with data miners Cambridge Analytica (CA)? And did UKIP pay CA for work undertaken?

Another wrong question. Instead: did CA present a bill for services rendered to UKIP?

The invoice says the payment was for “analysis of UKIP membership and survey data and creative product development”. Banks said he later made a donation to UKIP for that amount to cover the invoice.

Both Banks and CA deny any work was carried out. But according to whistleblower Brittany Kaiser, that’s because CA was never paid.

So the question should be: did CA carry out preparatory work (including [pdf] UKIP’s database of members), worth more than £40,000 for UKIP?

Banks said that: “Eldon has never given or used any data to Leave.EU. They are separate entities with strong data control rules. And vice versa.”

Perhaps the question’s inference should have been more specific.

Whether or not the investments by Banks in Russian gold went ahead is less important than the fact that a dialogue between like minds was established between him (and therefore Leave.EU) and Russia. And looking beyond the trees and woods, there lie bots.

Around 150,000 Russia-based Twitter accounts allegedly turned their attention on Brexit in the final days of the referendum. And claims by a data analyst suggest a Russian origin to many of these tweets.

A report published by Marco Bastos and Dan Mercea of City University London, titled The Brexit Botnet and User-Generated Hyperpartisan News, analysed 10m tweets between 10 June and 10 July 2016 that referenced the referendum using relevant hashtags. Out of 794,949 users, only 37% (30,122) were located in the UK.

And researchers at Swansea University and the University of California, Berkeley tracked 156,252 Russian accounts that mentioned #Brexit. The researchers found that the accounts posted 45,000 messages regarding the EU referendum in the hours leading up to the vote.

Meanwhile, openDemcracy has published multiple unanswered questions about Banks’s business dealings, including his offshore accounts. Indeed, nearly £11m of donations to major Brexit campaign groups funded by Arron Banks have still not been accounted for publicly.

We are not amused

There are so many questions requiring forensic examination. So perhaps it’s not surprising that, after the DCSM Committee session, which seemed more like a lads’ night out than the interrogation it should have been, chair Damian Collins issued the following assessment:

The DCMS committee is NOT amused… pic.twitter.com/fy2Wf5lPtb

One way or another, thanks to a handful of intrepid journalists, the net is closing in. And that could happen a lot more quickly if future interrogators ask the right questions.