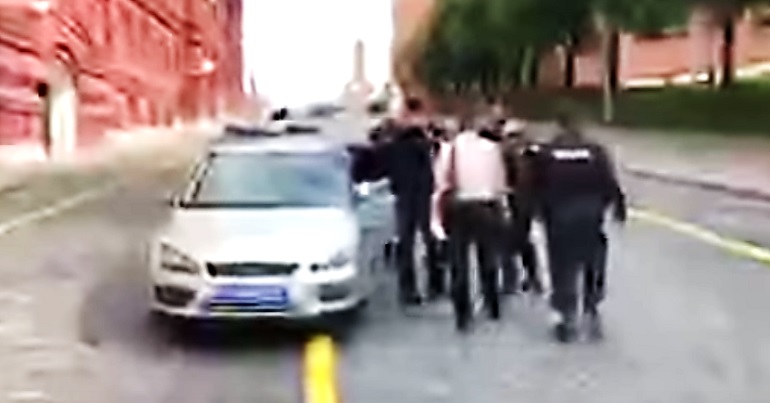 Russian police have arrested and charged a leading UK human rights activist with protesting near the Kremlin during the World Cup. His detainment highlights the ongoing clampdown on human rights in Russia under President Vladimir Putin.

The World Cup: starting as it means to go on?

Peter Tatchell is a leading LGBTQ+ and human rights activist. But during a protest over the persecution of gay men in Chechnya, police detained him. His Twitter account played out the unfolding drama:

Is Peter Tatchell under arrest? We think so. The live feed of his protest near the Kremlin is hard to watch. Judge for yourself. https://t.co/2IGKRZqibw apologies for poor quality.

Confirmed. Peter has been detained by Moscow Police and taken to Tverskaya Police Station. #RainbowRussians and #WorldCup2018 Pls RT support for Peter and call for @BorisJohnson and the @FCO to act now. pic.twitter.com/TXJqdGlIZQ

BREAKING – Peter Tatchell has been released. I've spoken to the Consulate Gen. who says he has been bailed & treated well. Thank you for the all the good wishes. Let's remember the awful plight of LGBTs in Russian & Chechnya. More from me soon. Simon at the @ptfoundation.

Just released from Kitay-Gorod police station in Moscow. Due to appear in court on 26 June, charged with violating Federal Law 54 & Presidential Decree 202, which prohibit all protests near the Kremlin & during World Cup. Glad to stand in solidarity with Russian & Chechen LGBTs pic.twitter.com/c5FoDbHF90

Sky News reported that Tatchell said in a statement:

I have written a letter to the Chief of Police of Kitay-Gorod police district, requesting that my court appearance is voided on the grounds that I am flying back to the UK on 18 June.

I have been told I will be free to leave Russia on that date as planned.

I spent one hour and 40 minutes in police custody, from the moment I was detained near the Kremlin to the moment of my release from the police station.

Senior officers were stern but the apprehending officer very helpful, friendly and polite.

I presume I was well treated, partly because I am a UK citizen and because a senior British Embassy consular official, Colin Wells, contacted the police.

I guess the Russians also did not want to be seen as being heavy-handed during the World Cup.

Tatchell’s protest was over the ongoing human rights violations against gay men in Chechnya, and President Putin’s apparent failure to intervene. As The Canary has previously reported, there has been an ongoing, brutal clampdown on gay men – including reports of “concentration camps” being set up, and murders.

But Tatchell has not been the only one highlighting human rights issues in the run-up to the World Cup:

With Saudi Arabia and Russia playing today you would think it was the World Cup of Human Rights Abuses. #WorldCupRussia2018

Also, a campaign called #RainbowRussians is highlighting the situation for LGBTQ+ people in Russia itself, while raising money for LGBTQ+ charities. The bookmaker Paddy Power has organised the campaign and will donate £10,000 to a LGBTQ+ charity every time the Russian team scores a goal. It says Russia is “typically homophobic”, and when campaign group Rainbow Europe rates the country as one of the worst for LGBTQ+ people to live, it’s easy to understand why.

Meanwhile, Reporters Without Borders took the World Cup as an opportunity to remind us all that Russia is ranked 148 out of 180 in its Press Freedom Index.

So while many people are enjoying the football, it’s also a pertinent time to highlight Russia’s human rights failings. But if, like Tatchell, you’re in Russia, be careful if you’re planning on protesting. Because even with the world watching, your basic human rights will probably be clamped down on.