18 weeks of Gilets Jaunes protests in France: 'The levels of repression are unimaginable' - The Canary 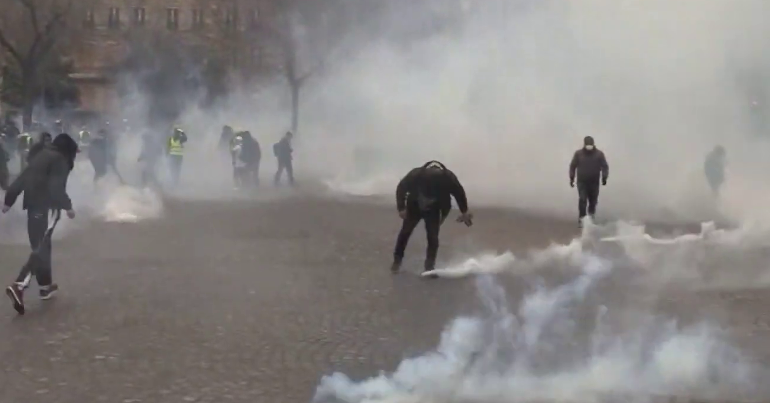 This weekend marks four months since France’s Gilets Jaunes protests began. People are marching in cities throughout France in their thousands. In Paris, reporters have stated that it’s the biggest turnout since it all began in November 2018.

The scenes coming from the capital city have been intense. It’s not just a demonstration: it’s an insurrection. A lot has been written about the French police’s use of weaponry, and this latest uprising is no different. Videos show the police firing water cannon, while tear gassing and pepper spraying crowds.

"The levels of repression are unimaginable. You have to get through clouds of tear gas to even reach the protest and police have set out to attack protesters, male and female. Macron must go!"#Paris #Acte18 #GiletsJaunes https://t.co/45xclTdAVd

Footage shows the police battering people with truncheons and indiscriminately punching whoever gets in their way.

Protester and author Paul Cudenec has been out on the streets since the Gilets Jaunes protests began. He told The Canary:

The police have not changed their tactics at all. They are still mutilating people with grenades and rubber bullets, and firing massive quantities of tear gas. A police whistle blower revealed that they have been ordered from above, by the state, to use violence against the movement. They know they can act with total impunity – and it shows!

The atmosphere on the streets remains, from what I have experienced, up-beat and determined. The numbers are still high and the constant propaganda from mainstream media saying the protests are getting smaller is wearing very thin! The official count of demonstrators is also being widely challenged. People set up fixed cameras in Paris to assess the crowds and on 23 February they recorded 22,000 people on the protest there. Police estimated 4,000 to 5,000!

Paris is on fire

The people revolting on the streets don’t appear scared of the police. If anything, the excessive use of violence seems to be making them more determined. A bank – one of the most obvious symbols of capitalism – was in flames. Fouquet’s restaurant – frequented by the super-rich – was also set on fire. Shops like Hugo Boss have had their windows smashed in. And protesters have been throwing paving stones at the police, forcing police cars forced to retreat.

Meanwhile, as people on the streets demand that Macron resigns, the French president poses for photos on a skiing trip. Macron’s smile might be short-lived, though, because the Gilets Jaunes appear to be going nowhere.