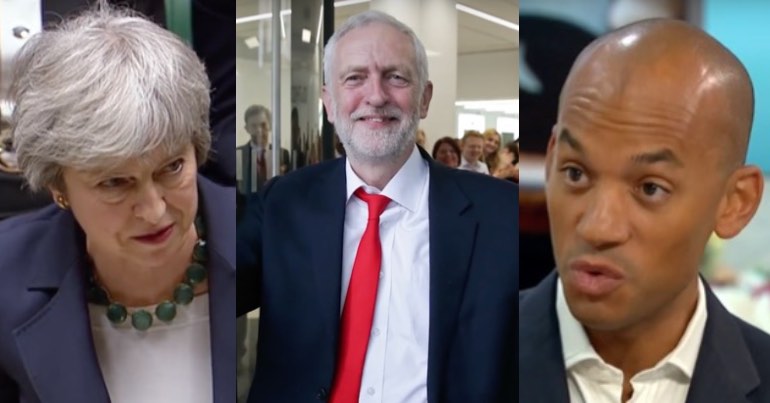 Despite relentless attacks by the media, Conservatives and The Independent Group (TIG) alike, new polling suggests the British public’s support for the Labour Party is growing.

And the news will make hard reading for TIG, as its strategy of Labour sabotage is proving to be a busted flush.

Political polling is notoriously unreliable. And people conveniently pick polls that confirm their own political biases. But the significance of the latest Survation polling is that it was the only company to accurately predict the 2017 General Election.

According to forecasting by Flavible Politics, this would translate into 303 seats for Labour compared to the Conservatives 255 in an election:

We recently polled Scottish residents on their voting intention for the next Westminster election. Full tables can be found here: https://t.co/bGcvfceKJg pic.twitter.com/Y9cWJGTFxw

Has Labour’s softening on a People’s Vote helped?

It’s hard to know what exactly has caused this shift in the polls. The government finds itself in such chaos that a collapse in its polling was predictable. But some are suggesting that Labour’s support for a potential second referendum (‘people’s vote’) has bolstered its popularity:

Biggest boost in Labour’s poll ratings for a long time after we finally came out clearly in favour of a public vote on Tory #BrexitShambles. 😊 #FinalSay #PeoplesVote https://t.co/FkbmMhRyWB

Labour warming to a People’s Vote could kill off TIG

In fact, the possibility of Labour supporting a second referendum might have hamstrung TIG. Because a key reason given by MPs for defecting from Labour was its alleged lack of support for a second referendum. But as Labour moves in that direction anyway, people might ask, ‘what’s the point of TIG’s existence?’

On 14 March, TIG MPs supported a motion calling for a people’s vote. However, Labour abstained and it was crushed. But Labour’s actions were predictable, as the motion wasn’t even supported by the official People’s Vote campaign:

When TIG and FBPE come out and try to blame Corbyn, despite this clear request to MPs from PV campaigners circulated today… we all know their game is up.

Nor was it supported by Corbyn critics in Labour like Peter Kyle:

Today’s vote on another referendum is not the right time or for the right reasons. Neither is it supported by the official ‘People’s Vote’ campaign.

In fact, the New Statesman‘s Stephen Bush believed the TIG motion was about providing it with election propaganda:

This vote is all about providing a leaflet for SNP, Plaid Cymru, Lib Dems and Notorious TIG: every reason to believe it will be effective.

The point being that TIG could frame the Labour Party as saboteurs blocking a second referendum against the will of Labour members. This was evident in an email it sent to supporters after it lost the vote:

Ding ding! And the winner of the first to email their supporters is…TIG! pic.twitter.com/7Tnjm9Lurs

Those of our Group who left the Labour Party did so because we believed the hope of changing the leadership’s position on Brexit was gone. Today, sadly, we were proved right. The leadership are determined to deliver Brexit

But journalist Paul Mason argued this shows a complete lack of political strategy on the part of TIG:

The TIG's defeated second referendum amendment was irrelevant. Its been clear the only route to a PV, one of 2x democratic routes to Remain, is through exhausting all the options. That's why the strategists (as opposed to grandstanders) in the PV campaign opposed it…

And yet, despite TIG’s attempts to be relevant, the latest polling shows its attacks have had no impact, and may have even backfired.

Twitter users have pointed out that Labour’s improved polling performance is all the more impressive considering the media’s relentless attacks:

Considering the entire weight of the BBC, ITV, print media is behind the Tories, and that the brexit split gives Tories a default ~50% leave vote anyway, it's absolutely remarkable Labour are anywhere near, let alone in front. Corbyn has done an incredible job as leader.

Aaron Bastani of Novara Media argues that the BBC, in particular, has now “lost it”. Bastani claims it seems hell-bent on undermining Labour through inaccurate reporting, the exclusion of left-wing voices, and softness on the Conservatives:

Ironically, because of this media bias, many critics doubt whether Survation’s favourable Labour polling will be reported at all:

Calling on all journalists to like and share this poll and offer a speculative narrative to explain the swing https://t.co/QcY5iVNLLw

After all, Question Time’s Fiona Bruce was forced to clarify Labour’s polling position after misrepresenting it previously.

An establishment backlash is coming

Positive Labour polling is often followed by an onslaught of smears and criticism. But as the government rapidly implodes, those smears could be worse still. Because the desperate establishment is increasingly terrified that its gravy train is soon to be derailed by a democratic socialist alternative.