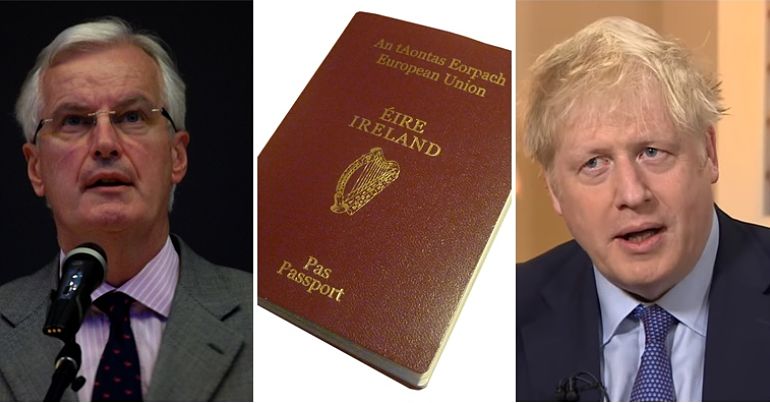 On 27 January, the EU’s chief Brexit negotiator Michel Barnier spoke at Queen’s University Belfast. And his words gave some hope to Irish citizens living in the north of Ireland. Barnier said:

Whilst Northern Ireland will no longer be part of the EU, people born and raised here that choose to be Irish citizens will still be EU citizens. This means they can continue to move and reside freely within the EU. The UK has committed to upholding their rights, and they cannot be discriminated against on the basis of nationality.

But while these words may be hopeful, they are currently meaningless. Because unless Johnson’s government fully incorporates the 1998 Good Friday Agreement (GFA) into UK law, Irish people born north of the border can’t identify as Irish from birth. Failure to do so significantly undermines the GFA and what it was supposed to achieve. This is something which could lead people to wonder what they signed up to all those years ago.

Barnier’s message was welcomed by citizens’ rights campaigners, including Emma DeSouza. But it may not be as straightforward as Barnier presents. Because DeSouza, born in Derry in the north of Ireland, has been fighting for the right for people born there to be recognised as Irish citizens from birth. This is as laid out in the GFA.

The GFA promised to:

recognise the birthright of all the people of Northern Ireland to identify themselves and be accepted as Irish or British, or both, as they may so choose, and accordingly confirm that their right to hold both British and Irish citizenship is accepted by both Governments and would not be affected by any future change in the status of Northern Ireland.

But this part of the GFA was never fully incorporated into UK legislation.

DeSouza first became aware of this in 2015 when she applied for a residence card for her US-born husband. In the application she declared herself ‘Irish’. But the Home Office rejected her application, stating she was ‘British’ because she was born in the north of Ireland.

As a result, she could only reapply if she identified as ‘British’ or if she renounced her British citizenship to become ‘Irish’. But as she never considered herself British in the first place, she felt she couldn’t renounce what she never had. DeSouza said she:

discovered that my lifelong Irish identity is evidently considered secondary to an unclaimed British identity.

So in 2017, she took a case to the first tier of an Immigration Tribunal against the Home Office. She won. However, in October 2019, the Home Office appealed this decision to the Upper Tribunal, and this time it won. This currently means people born in the north of Ireland automatically have British citizenship unless and until they renounce it.

In essence the outcome of this appeal means the British government didn’t incorporate the part of the GFA dealing with citizenship into British law. Therefore the British Nationality Act 1981 stood.

Welcome as Barnier’s words may be, it’s the British government that decides. And it’s the government which must change the law to introduce the relevant part of the GFA into British law. So if people born in the north of Ireland, who consider themselves Irish, are legally British, it could make life in a post-Brexit north of Ireland a much more complex place to live.

But DeSouza is fighting on and appealing the decision of the upper tier immigration tribunal. Furthermore, the agreement that reopened Stormont (the north of Ireland parliament) New Decade, New Approach promises that:

This immigration status will be available to the family members of all the people of Northern Ireland, no matter whether they hold British or Irish citizenship or both, no matter how they identify.

If implemented, this could change UK immigration policy to allow family reunification rights. This would remove some obstacles. But there would still need to be changes made in the UK parliament. And these changes would mean implementing the GFA in full so people born in the north of Ireland, who see themselves as Irish, won’t have to go through the farce of renouncing British citizenship in order to be seen as Irish.

Without this vital change, the GFA could have little meaning for Irish people living north of the border. Add to this the uncertainty of Brexit and the transition period, and it really does make for not only an uncertain future, but a very turbulent one too.