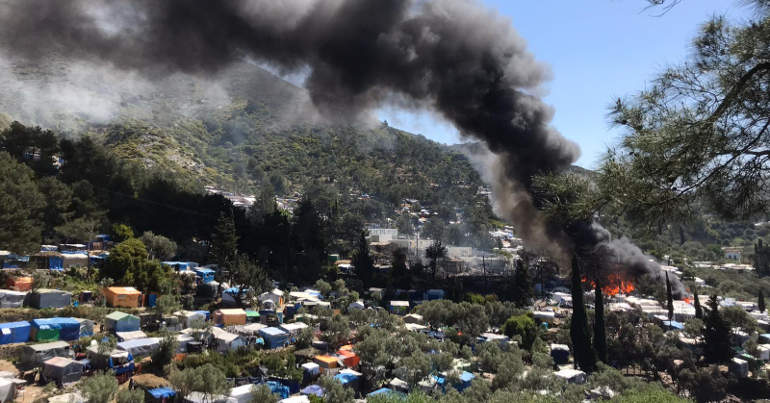 Human rights campaigners on the Greek island of Samos have told The Canary that the situation for refugees is “beyond breaking point”. Since the early 2000s, people have been seeking refuge on the Aegean islands, fleeing the West’s neo-colonial policies in the Middle East. Around 7,000 people are currently stuck in Samos’ Vathy camp, which has capacity for under 700 people.

Europe Must Act (EMA) is a movement with people on the ground on the Greek islands. EMA’s Frankie Ellwood explained to The Canary that:

a ‘jungle’ extends far beyond the official Vathy camp. It’s a similar story in Lesbos, Chios, Kos and Leros. Lesbos has 20,000 people but is built for 3000.

EMA is campaigning for the Aegean island camps to be evacuated. This is especially urgent as the threat of coronavirus looms.

Devastating fires sweep through the camps

There were two fires and a third the following morning. The fires were the result of community in-fighting as people struggle for supplies. Specifically, people [living in] in UNHCR containers have (limited) access to electricity and this results in a power-imbalance that understandably fuels tensions.

Estimations from my colleagues suggest that 500 people lost everything. They now have no place to stay… Currently people are sleeping on a gravel square outside the camp (previously used to play football on). They were just sleeping on the ground but slowly they are finding tents and setting them up. These tents are not good quality and a rainstorm this morning soaked their blankets and clothes.

Ellwood said that Samos’ authorities are making it difficult for Non-Government Organisations (NGO) to support the refugees. The island’s police have even prevented activists from giving out blankets to those in need.

Fires are an effect of Europe’s “inhumane asylum policy”

According to EMA, the Vathy fires came just seven days after a fire swept through Vial camp in Chios. Several fires also burnt down containers and tents in Moria camp, Lesbos, in March. EMA says that the fires:

are the cumulative effect of the subhuman conditions in the hotspot island camps, which were created as a result of Europe’s rigid, inhumane asylum policy.

On 22 April, the UK and Greece signed a joint action plan. According to the British government, this plan is “historic”. Minister for immigration compliance Chris Philp stated that “the joint action plan will deliver on our commitment to keep our borders secure”.

Apparently the plan will “ensure asylum and returns processes are as efficient as possible”. A Border Force cutter will reportedly continue to patrol the Aegean sea.

by signing the new UK-Greek action plan, the UK has made a firm commitment to work cooperatively with Greece to secure borders and curb ‘illegal migration’, by preventing undocumented migrants entering Greece and moving through Europe.

By framing asylum in reference to ‘secure borders’ and asylum seekers as ‘illegal’ and ‘dangerous’, the action plan fails to consider the reasons why people are forced to flee their countries of origin and make these arduous and often deadly journeys in the hope of securing protection. Again, the UK has prioritised its inhumane and small-minded hostile environment policy over fundamental refugee rights.

EMA told The Canary that Samos’ hospital only has 2 ICU beds. It is, therefore, impossible to see how the island will cope with an outbreak of coronavirus. Ellwood explained:

With the lockdown restrictions being slowly lifted, and given that these islands rely on tourism for their economy, the virus will come. There is no flattening the curve here. The islands urgently need to be decongested.

EMA is urging people all over Europe to take part in the #CitiesMustAct campaign. This:

asks citizens, councils and mayors of European towns and cities to pledge their support for the immediate relocation of asylum seekers on the Greek islands…

Whilst cities may not have the legislative power to directly relocate refugees themselves, #CitiesMustAct will send a powerful message of citizen solidarity that governments and the EU can’t ignore!

There are already a number of local Facebook groups working on this campaign. EMA urges people to get involved in their local group, and – if there is currently no campaign where you live – to set one up.

Evacuate the camps before it’s too late

Responding to the urgency of the situation in the Aegean camps, the Mayor and citizens of Berlin have pledged to house 1,500 refugees.

But of course, it’s unlikely that we’ll see the racist British government volunteering to relocate people fleeing violence and persecution. According to the UN, Germany hosts 1.1 million refugees. On the other hand, in 2018 there were just 126,720 refugees and 45,244​ pending asylum cases in the UK.

This week, the UK government announced that it has offered 5,400 rough sleepers accommodation in the past month. With hundreds of thousands of empty properties in the UK, there’s no reason why the UK can’t do the same for refugees and asylum seekers.

Let’s call for the urgent evacuation of the Aegean islands’ refugee camps, and for the safe relocation of everyone who lives in them.

Featured image via Europe Must Act, used with permission