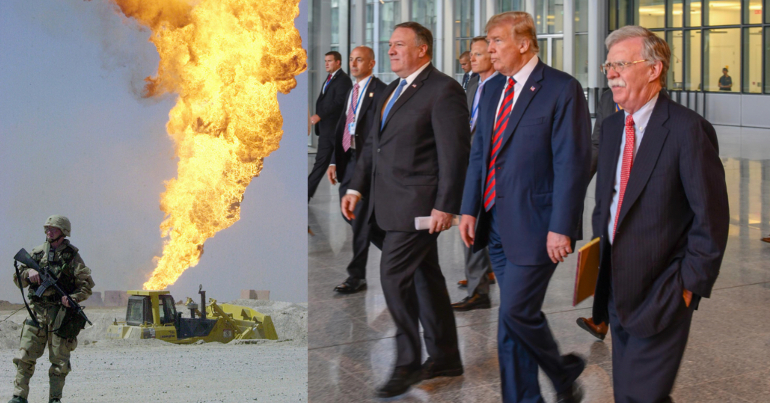 Venezuela recently held elections for its National Assembly, the South American nation’s unicameral legislature. The US and its allies have denounced the election as fraudulent. But something is seriously amiss. The US government is currently led by a man who is openly attempting to undermine democracy in his own country. And comments from one of that government’s major figures show just how flagrant that hypocrisy has become.

On December 6, Venezuelans went to the polls for the first time since the beginning of the US-backed coup. The governing United Socialist Party of Venezuela (PSUV in its Spanish initials) and allied parties won over 67% of the vote. As a result, they have enough seats to form a majority and therefore will replace the opposition as the new majority coalition.

The National Assembly had been controlled by parties in opposition to the PSUV for the last five years. In 2015 the opposition coalition won a landslide election in the wake an economic crisis caused in large part by falling oil prices. In January 2019, Juan Guaidó – a previously little-known figure from the opposition’s most far-right faction – became head of the legislative body.

Guaidó demolishes his own claim to the presidency

The US recognized him as ‘interim president’ on the dubious grounds that the previous presidential election was ‘fraudulent’. Guaidó based his claim to the presidency on an (again dubious) interpretation of terms of the Venezuelan Constitution relating to the president vacating his office and democratic breakdown. Right-wing Latin American governments along with the US’s traditional foreign policy allies in Western Europe followed the US’s lead and recognized Guaidó as Venezuela’s leader. However, a majority of the world’s countries, including four of the five major emerging ‘BRICS’ nations’ (Brazil, Russia, India, China and South Africa), continue to recognize president Maduro as the country’s legitimate head of government.

The US and Venezuelan opposition are claiming that these latest parliamentary elections are fraudulent as well. But the reality is that they would never have accepted the result, whoever won them. At the US’s behest, most of the major opposition parties boycotted the vote. Notice how this actually completely undermines Guaidó’s own claim to the Venezuelan presidency – by his and the US’s own logic! After all, he bases his claim on his position as head of the National Assembly, which he now can’t possibly lead because he, by definition, can’t be elected since he isn’t participating in the election.

Moreover, the boycott forms part of a tried and tested three-card trick that the US and its internal allies in Venezuela play in order to undermine the legitimacy of elections. It goes something like this: the opposition boycott results in a PSUV landslide and low turnout; this is then itself presented as evidence that the outcome isn’t legitimate.

This year’s National Assembly elections are far from the first time the US and Venezuelan opposition have pulled this trick. They did so during the most recent presidential election in 2018 and also during Venezuela’s 2005 legislative elections. Tellingly, usually there are factions from the more moderate wing of the opposition that aren’t willing to go along with the façade and break with the US line by participating anyway.

This year, however, there is another layer of hypocrisy at play. Because at the very same time as the US is denouncing an alleged breakdown in democracy in Venezuela as part of a transparent coup strategy, the current administration in Washington is attempting to undermine the result of its country’s own presidential election for its own partisan interest. As The Canary has previously reported, president Donald Trump has been consistently claiming that the election in which he lost to Democratic Party challenger Joe Biden was ‘stolen’ – and all without providing a shred of evidence to support this claim.

The Trump administration perhaps reached peak audacity with a tweet from secretary of state Mike Pompeo. Pompeo posted on Twitter:

Venezuela's electoral fraud has already been committed. The results announced by the illegitimate Maduro regime will not reflect the will of the Venezuelan people. What's happening today is a fraud and a sham, not an election.

…and irony as well

In addition to this flagrant hypocrisy, there is also a layer of irony to this. Because even in previous elections where you haven’t had a far-right authoritarian like Trump calling the result into question, the US’s democratic credentials still haven’t been particularly impressive. For instance, US presidential elections are decided not by the popular vote but by an “electoral college” that gives disproportionate representation to rural, sparsely populated, and overwhelmingly white and right-leaning states like Wyoming and the Dakotas. So far this century, the electoral college was won by a candidate who lost the popular vote on two occasions – George W. Bush in 2000 and Donald Trump in 2016 (both Republicans).

Moreover, US elections to this day have been marred with extensive voter suppression – particularly of ethnic minorities, immigrants, and poor people – not to mention corrupted by the influence of money. As a result of the infamous Citizens United Supreme Court decision, there is now practically no limit to the amount that candidates for public office can receive from corporate interests.

As a result, candidates from both of the US’s major parties take sometimes as much as hundreds of millions from corporations and billionaires to bankroll their electoral campaigns. And as The Canary has reported on numerous occasions, it’s now hard to determine which party is worse. Democratic Party presidential candidate Joe Biden has taken millions from Wall Street just as his predecessor and fellow Democrat Barack Obama did.

Clearly, the US has no credibility when it comes to lecturing others about deficits in democracy – whether it be in Venezuela or anywhere else for that matter.