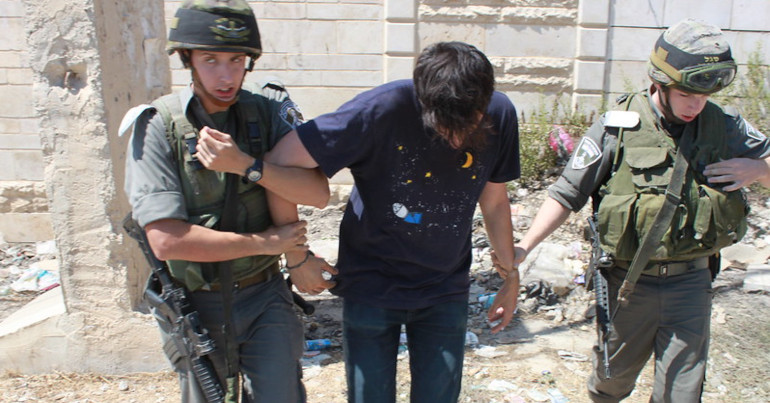 Palestinians are calling for international support for over 2,000 people who were arrested by Israeli forces during the May 2021 anti-colonial uprising.

A fund has been established to help people who are being prosecuted.

The Canary spoke to Hala Marshood – who is organising to support those arrested – about what triggered the uprising:

during the month of May, there was a Palestinian uprising in all of historic Palestine where the catalyst and direct trigger was Jerusalem and what was happening and still is happening in Sheikh Jarrah and in Jerusalem more generally. But it was also an accumulation of people’s anger and frustration from their lived realities under the Israeli colonial regime that has practised all kinds of oppression on us during the years. People reached a point where they practised agency and political will – starting from the month of May – in a defragmented manner in all of Palestine.

Sheikh Jarrah is a Palestinian neighbourhood within Israeli occupied East Jerusalem where there has been a long history of struggle against evictions of Palestinian to make way for Israeli colonists. During May, Israeli forces blockaded the area. Mohammed and Muna El-Kurd – residents of Sheikh Jarrah – became famous for their social media posts documenting Israel’s ethnic cleansing policies, Mohammed tweeted about the increasing repression in May:

The settlers are shooting with real guns at the protesters. This is settler-colonialism. #SaveSheikhJarrah pic.twitter.com/gbQ6fFmzz5

On 10 May during Ramadan, Israeli settlers tried to push their way into the Al Aqsa mosque in Jerusalem – Islam’s third most holy site – facilitated by the Israeli army. A confrontation ensued in which the mosque was surrounded by Israeli snipers, and 200 Palestinians were injured. It’s reported that three people lost their eyes.

The events in Jerusalem sparked an uprising across all of historic Palestine.

Jamal Jumaa of the Stop the Wall campaign told Phoenix Media Cooperative in May:

it’s national momentum,  [the] Jerusalem-Ramadan intifada [uprising] brings back again the spirit of resistance with full pride of our people – this people that proves every time that it is strong, great and just, and [that we are] freedom fighters.

The mood of the people in all historical Palestine is very high, united against oppression, racism and apartheid colonialism

Demonstrations are everywhere in all Palestine, united from Gaza to the West Bank, Jerusalem, Galilee, the Triangle and Negev

Galilee, the Triangle, and the Negev are all parts of historic Palestine which lie within the borders of the state of Israel. The uprising was notable because of the participation of Palestinians living within Israel’s 1948 borders. Sireen Khudairy told The Canary in May:

What’s happening now in Palestine actually, it’s the first time I have seen it. It’s not like the Second Intifada [the massive uprising which began in 2000], it’s even more. Because [now] people from ’48 [’48 is the term used for the parts of historic Palestine that were colonised in 1948, and fall within the state of Israel] are doing demonstrations and they are struggling against the Israeli police and settlers.

The repression against Palestinians who rose up against Israeli colonialism was brutal. Marshood told The Canary:

And of course, the Israeli colonial forces reacted in the way that was expected from them. [By] attacking people, raiding homes and arresting 1000s. And in fact, 2000 people were arrested inside ’48 and many of which are minors and children. It’s important to note that what was happening was also to deter younger generations from resisting and being politically active.

“Violent physical and mental assaults on the detainees”

Marshood explained that the arrests were not confined to those demonstrating, but also to those who were aiming to document the repression:

A report released in June by Israeli human rights organisation Adalah documented the use of torture against Palestinian-Israelis who were arrested after the uprising.

Arrests are “costly” as well as “brutal”

Marshood explains that this repression was intended to intimidate Palestinians as a way to stamp out the rebellion. And that the prosecution of demonstrators is a continuation of these intimidation tactics:

So 200 of those 2000 are going to be indicted or are already indicted. And it’s important to note that many of them come from impoverished households from rough socio-economic conditions. And of course, this is a deliberate step by the Israeli forces because arrests are not only brutal, but they’re also costly. And the indictments are gonna lead to the further impoverishment of those families.

“We see this fund as a continuation of the uprising”

She explained that the Baladna [our country] Dignity and Hope Detainees Fund had been set up to try to alleviate this financial pressure:

We see this fund as a continuation of the uprising and of our collective agency that we started practising since May.

The fund’s aims are to provide legal representation for defendants and to support the detainees’ families, “many of whom already live in dire socio-economic conditions, by ensuring that they do not have to bear the financial burden of these legal costs alone”. The fund has already raised over $67k of its $307k goal.

Solidarity in the face of oppression

Palestinians who joined the May uprising were struggling against Israel’s ongoing colonisation and ethnic cleansing of Palestinian land. They were fighting against racism and state brutality, and for freedom and autonomy. They deserve our support.