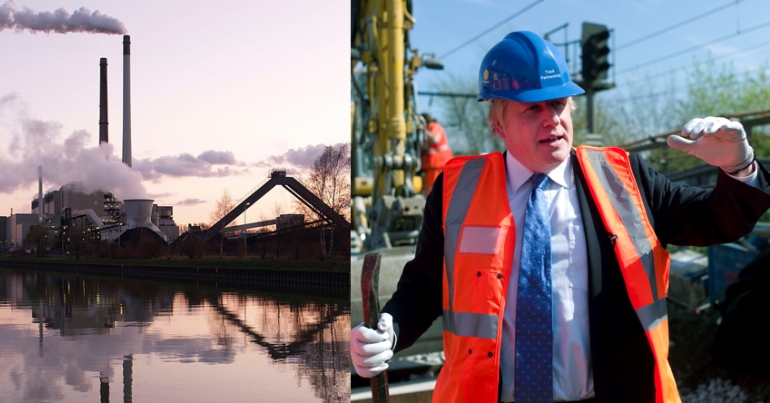 Prime minister Boris Johnson has come under fire for his comments about the decline of coal mining in the UK. On the surface, it might seem hypocritical for those on the left, and especially environmentalists, to mourn the shutting down of coal pits. But a more nuanced analysis shows that there is, in fact, no contradiction.

During a visit to Scotland on 6 August, Johnson preposterously implied that Britain has Margaret Thatcher to thank for the country having a head start in moving away from coal-generated energy. He said:

Look at what we’ve done already. We’ve transitioned away from coal in my lifetime. Thanks to Margaret Thatcher, who closed so many coalmines across the country, we had a big early start and we’re now moving rapidly away from coal all together

Critics were quick to point out that this was not Thatcher’s motivation for shutting down coal pits all throughout the country. Scottish first minister Nicola Sturgeon, Welsh first minister Mark Drakeford, SNP MP Ian Blackford, and even some Tory MPs were amongst those who publicly criticized the remarks. The comments were perhaps best summed up by Scottish Green MSP Gillian Mackay, who said:

But there is more to Johnson’s comments than this false characterization of Thatcher’s motive for closing the mines. The reality is that one can be both an environmentalist and a critic of this move. First of all, Johnson leaves out that this wasn’t a ‘transition’. In the aftermath of pit closures, the UK ended up needing to import a large amount of its energy. And this imported energy hasn’t necessarily been more environmentally responsible. Indeed, in a cruel irony, after shutting down domestic UK coal mines, the UK government then proceeded to import large amounts of coal from abroad. Thatcher had planned to do this all along because it was cheaper, which demolishes any claim that she was motivated by opposition to coal-generated energy itself.

Importing energy also has its own pitfalls and environmental hazards. For instance, there are added environmental costs in the form of transportation when something is imported. The UK could also not regulate the production of that imported energy because obviously it’s coming from overseas. Importation, therefore, leaves foreign governments the task of setting labour and environmental standards. These standards may well be worse, especially given that much of the UK’s coal currently comes from the US, Russia, and Colombia. All three have a reputation for low-regulation economies.

A gradual phasing out was never on Thatcher’s mind…

Most importantly, Johnson left out of his remarks the fact that, even if domestic extraction did need reducing, Thatcher didn’t have to shut down the mines so abruptly. They could instead have been gradually phased out so that closures didn’t have such a damaging effect on mining communities. This gradual phase-out could have gone alongside investment in renewable energy generation plants and job training in this technology in areas affected by pit closures.

Admittedly, renewable energy was not on people’s radar then as much as it is now. However, prototypes for wind turbines had been developed in the UK as early as the 1950s. Solar power, meanwhile, has been widely available since the 1980s, with sales of solar cells in the US exceeding $250m in 1983. Transitioning to such technology would have had the double benefit of absorbing laid-off miners into new careers in renewable energy while also keeping domestic energy production up at roughly pre-pit closure levels.

…and it’s obvious why

Of course, Thatcher would have never done that. And that’s because she considered unionised miners to be “the enemy within.” As the late-Labour MP Tony Benn put it:

She knew perfectly well the strength of the labour movement lay in three sources of power. One was the trade union movement. So she took on the miners, described these courageous and skilled people as “the enemy within.” For God’s sake, what an insult to the people who built our economy in the sweat of their labour. And she introduced legislation that made trade unions actually illegal.

During a speech in parliament in January 1992, Benn also pointed out the hypocrisy of Thatcher’s stance on mines given her party’s fawning treatment of British farmers:

Ministers [in Thatcher’s government] have lied, and lied, and lied about the mining industry, and that is why people are so incensed. And don’t tell us it’s market forces. If market forces applied to the farming industry, half the farms in Britain would have closed years ago ’cause you can get cheaper food from New Zealand and Australia. And the Tory party depends on the farmers, so they support them… I’m not in favour of applying market forces to farms. You can’t close a farm one year and open it the next. But the miners haven’t had set-aside grants where they’re given money not to produce coal.

It all boils down to Tory defence of capitalist interests

In short, Thatcher’s decision to close down the coal mines was made on purely partisan ideological grounds. Just as she was not motivated by considerations about economic viability, nor was she motivated by any environmental considerations. The closure of the mines was simply a case of wanting to crush organised miners because they threatened the dominance of capitalist interests.

And those were the very interests that her party represented then under her leadership. And evidently, those are the interests that the party continues to represent under Johnson’s leadership today – shown through his cheap backhanded attack on the labour movement, duplicitously disguised as concern for the environment.