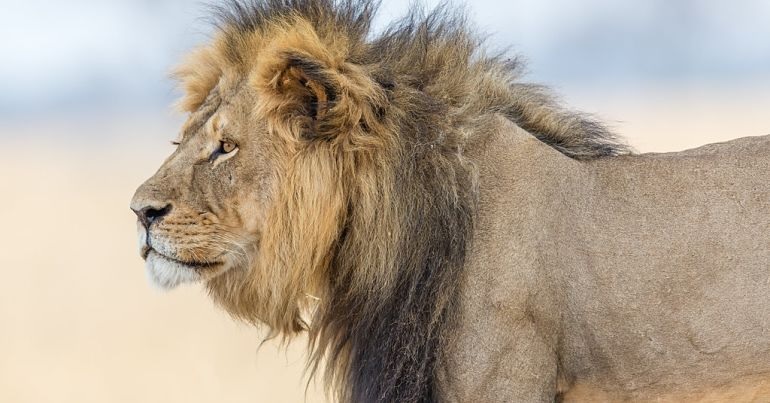 A recent trophy hunting controversy in Zimbabwe has strengthened the argument that the practice is damaging to conservation. In the wake of the scandal, African wildlife experts have also told The Canary that, although proponents argue that trophy hunting enriches and empowers communities on the continent, the opposite is true in reality.

As The Canary has previously reported, whether trophy hunting helps or hinders communities and conservation is a contentious subject.

A trophy hunter reportedly killed a lion called Mopane in Zimbabwe in early August. The circumstances surrounding his killing echo those of Cecil the lion. According to reports, the trophy hunter killed Mopane in the same area as Cecil, outside of Hwange National Park, and with the same weapon – a bow and arrow. Mopane also apparently took a long time to die, like Cecil.

Campaigners have since raised concerns about other male lions in the area they suspect are at risk of being targeted by trophy hunters.

As the Zimbabwe Elephant Foundation’s founder Noma Dube told The Canary, Mopane leaves not one but two prides behind. Dube explained:

Mopane had two prides, one of his own and the other one he kind of adopted which is very rare. It goes to show who Mopane was, an incredible lion.

There is some discussion over the exact make-up of Mopane’s prides. But it appears that they consist of at least two cubs, six or less sub-adults (individuals who are no longer cubs but haven’t yet reached adulthood), and around four females.

One arrow, many lives

Dube described the potential impact of Mopane’s death as “horrific”. That’s because it will leave the cubs vulnerable to being killed by other male lions attempting to assert dominance over the remaining pride members. The females are also at risk as they may try to defend their cubs. Dube further asserted that if the females flee with their young in to evade other males they may end up “hunting and killing livestock” in areas that get them killed. She concluded that “taking off dominant pride males in this area has terrible effects on the dynamics of the pride”.

Dube’s assertions reflect comments made by others. African conservationists Dereck and Beverly Joubert have previously stated that the dynamic whereby other males “move in to usurp the pride” after the removal of a dominant male lion, means that their single death “can lead to a cascade” of lion mortalities.

In short, although Mopane’s killer targeted only one lion, the act potentially threatens numerous others. This raises questions about the impact of the practice on conservation, given there are potentially less than 10,000 wild lions left in Lion Conservation Units (LCUs) across Africa, according to LionAid.

The Canary contacted Zimbabwe Parks and Wildlife Management Authority (ZimParks) for comment. It did not reply by the time of publication. However, in a response to a tweet by Fauna and Flora Zimbabwe condemning Mopane’s killing, ZimParks’ spokesperson Tinashe Farawo said:

The hunts were legal, the best you can do is to lobby for the change of our laws.

An ethical and scientific lie

The Canary also spoke to another expert on the subject, whose comments cut to the core of science’s role in propping up trophy hunting.

In response to a question about the conservation implications of targeting dominant male lions in trophy hunts, carnivore ecologist and conservation writer Mordecai Ogada said that the question itself “illustrates the danger posed by science to our sovereignty over our natural heritage”. He asked:

If I say it shouldn’t be done, does that imply that killing of females, solitary males, or subordinate males is OK?’

Essentially, Ogada argued that providing a scientific response would “imply that the killing of lions for sport is somehow acceptable”. It would be, he continued, “to accept the ethical and scientific lie that calls sport hunting a conservation tool, with technical basis”.

As Ogada’s comments suggest, in terms of conservation, there are no ‘good’ individuals to target for trophy hunting. Typically, for example, trophy hunters have targeted male elephants over a certain age, arguing that they are redundant due to their diminished role in breeding. But a 2020 study showed that these older elephants play a key role in the development and training of younger males.

Ogada also spoke to the racial and human aspects of trophy hunting on the continent. He summarised trophy hunting as “a form of self actualization and bloodlust pursued by white supremacists in Africa”.

Conservationists in support of the practice generally argue that communities co-existing with trophy-hunted species receive financial benefit from the trade. So they say communities benefit and, in turn, so does wildlife because it incentivises people to conserve populations of wild animals. They argue that without hunting, people would convert land to uses incompatible with the survival of those populations.

But this argument insinuates that, without incentives, African people won’t look after the wildlife around them. This is not what history tells us. In fact, as South African economist and policy analyst Ross Harvey previously told The Canary, it was “colonial hunting that brought many species [in Africa] to the brink of extinction”. Meanwhile, Ogada asked:

When is “science” going to address the obvious white supremacist nature of sport hunting in Africa? Or is the social status of the slain lions more important than the diminution of indigenous African people?

An insult and a curse

In 2020, a number of community officials, mainly from Namibia and Zimbabwe, signed an open letter in support of trophy hunting that argued it enables conservation and upholds human rights. But some officials and members of affected communities in Zimbabwe and elsewhere have asserted that the financial income from trophy hunting rarely trickles down to people, or is minimal. Dube pointed out that, although trophy hunting has been taking place for decades, the “communities living alongside hunting concessions have never been lifted out of poverty”.

Wildlife journalist and author Adam Cruise recently undertook field research in Namibia. His findings reveal that the country’s desert elephants are “on the verge of extinction”, mainly due to trophy hunting. Furthermore, in relation to benefits to communities, Cruise told The Canary:

Trophy Hunters proclaim that the proceeds from a hunt benefit impoverished communities. This is blatantly false. Most of the money spent by a trophy hunter on a prize such as a lion, ends up in the hands of booking agents, flights, five star lodge accommodation, the accompanying professional hunter and a permit to the government. The locals, if they are lucky may have some of the carcass (minus the head and pelt of course) tossed in their direction as ‘food’.

Quite frankly the notion that trophy hunting benefits the poor is an insult to those local communities and a curse on conservation.

Studies have also shown that the funds raised from the practice are negligible in relation to conservation.

In light of the alarmingly low numbers of wild lions remaining, every individual left is vital in conserving the species. Moreover, as Dube noted:

Lions play a crucial role in the wild by controlling the herbivore population. We cannot afford to lose our predators.

Indeed, the rich tapestry of life on Earth as a whole is essential. It’s responsible for the ecosystems that humans, and all living beings, depend on for survival and health. Unfortunately, however, the world is losing species at a rate that the UN says is “unprecedented in human history”. The reasons for this unprecedented decline are numerous, but they’re nearly exclusively human-led. Habitat loss, pollution, the climate crisis, and the wildlife trade – including trophy hunting – all play a part.

Trophy hunting can and is doing damage to communities of wild animals. It also doesn’t appear to be lifting people out of poverty – instead trapping them in a colonial power structure where they have little sovereignty over their natural heritage.

In short, the idea that trophy hunting helps either communities or conservation is on incredibly shaky ground.